I have always been interested in railways and railways play a big part in my family history going back to my Great Grandfather.

My the first time I saw a thumper was in 1984 as I passed Swindon Works and managed to get a shot of 1302 outside the works.

A few months later I had my first proper Thumper experience when a Hastings Unit came to my old home town in South Wales on the Cymru DEMU Railtour.

Over the next few years I managed to get the odd occasional shot but when I moved to London in 1998 I was able to get shots of the final years of the Thumpers.

I had built up a small following with the images on my Flickr site and then I was contacted by this bloke who had set up a Thumper site.

I had a message from Chris Cannon asking if he could use an image for his site on a feature called 'Photo of the month' where he proudly displayed it on the home page.

The next month I had a similar request to which I responded and then on the third month I wasn't surprised when I saw a message in my inbox at this point I was thinking do I get an ASBO against this guy for stalking.

To my surprise it differed from the pervious two months and basically said " instead of asking for pics every month do you want to co run the site'.

After two years the site has grown beyond what we ever imagined it would, along with the ever growing Facebook group and we are now working with the preservation group to run a series of events marking the final withdrawal of the thumpers.

I first got interested in the units when my father, Ted Cannon, took me to his work at Fratton in Portsmouth around 1965. He was a brake examiner at the Fratton yards and from then on I was hooked. I lived in Warsash near Fareham in Hampshire and in the late 1960's i spent a lot of time standing on Swanwick station as the thumpers went thrashing through to Salisbury. I then moved to Godstone in Surrey and low and behold there were thumpers there as well. I now live in Uckfield. Nuff said !!.

I set up the website in 2012 when i realized that a number of the units had been preserved but that there was no central place you could go to get any information on them .After setting up the website it became apparent that it was a lot of work to keep on top of it and after a year I had to ask for help and Amy came on board. Since then the site has progressed beyond recognition and in the last year  the site has had over 14000 hits. This has been in no small measure to the work that Amy has done, not only here, but in setting up the facebook group as well. The vast majority of the pictures on this site have been provided by amateur photographers who had the foresight to record those images, all that time ago. Without those pictures this site would be a shadow of what it is today, so a very big thankyou to everyone who has contributed.

Thumpers are more popular than ever and are proving a to be real asset to those heritage railways that have preserved examples. They are an important part of our railway heritage so please try and visit a preserved example. Be careful though, you might get hooked..... 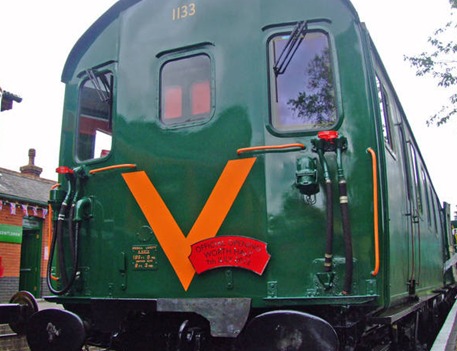