Seen in Selhurst just after loosing its Ex EMU trailer in '93 is 205205 waiting for its next turn of duty.

After the facelift it was decided not to go ahead with the whole fleet so this was the only unit to be treated like this.

The main modifications were corridor connections between the cars which, apart from the departmental unit 930301, was the only 205 to have this feature.

Another new feature was the interior where the wood and formica panels were removed and replaced with ones manufactured from glass fibre. On the engineering side,  the major modification was the re-gearing of the traction motors which enabled it to run up to 95MPH and the control desk in the cab was replaced with one from a more modern CIG EMU.

In January 1993 its center trailer was removed and used as a Sandite vehicle in unit 93030, apparently because of the corridor connections. It ran as a two car unit until June 1995 when it received another center car.

It was needed for a new service from Brighton to Ashford but with that distance toilet facilities were needed, so it was given a trailer from an former CEP EMU.

With this new traIler 71634 it was given another set number and was now 205205. It ran in this formation until September '93 when the trailer was withdrawn and the rest of the unit soldiered on for another year until it was withdrawn.

When withdrawn it was sold to the North Yorkshire Moors Railway, but there was a few problems getting it there. It was towed up from Tonbridge Yard by a Class 66 diesel but unfortunately someone had forgotten to remove the hand brake. When it arrived in Yorkshire it had extremely bad flats on the tyres so a replacement set of bogies from 1112 were dispatched for replacement.

After the bogies were replaced there were problems with the clutch fan which is a common problem with the thumpers and the unit was sidelined on the Yorkshire line for a few years.

A couple of years ago it was sold to the Epping and Ongar Railway where its has been restored to NSE Livery which it carried after modification all those years ago. 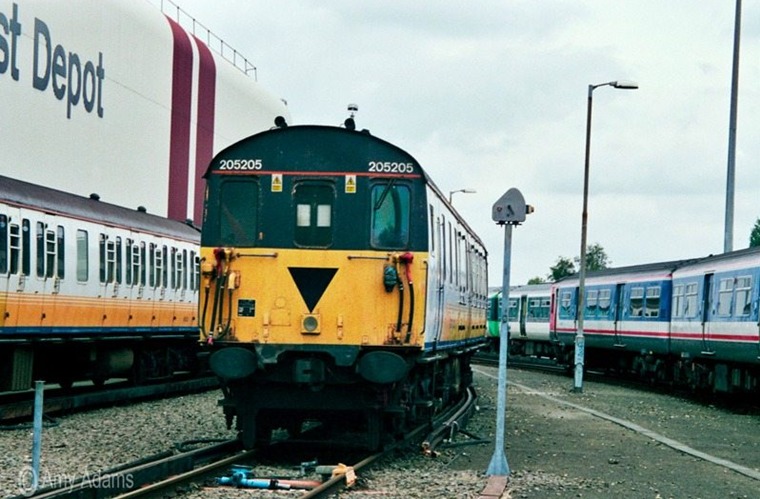