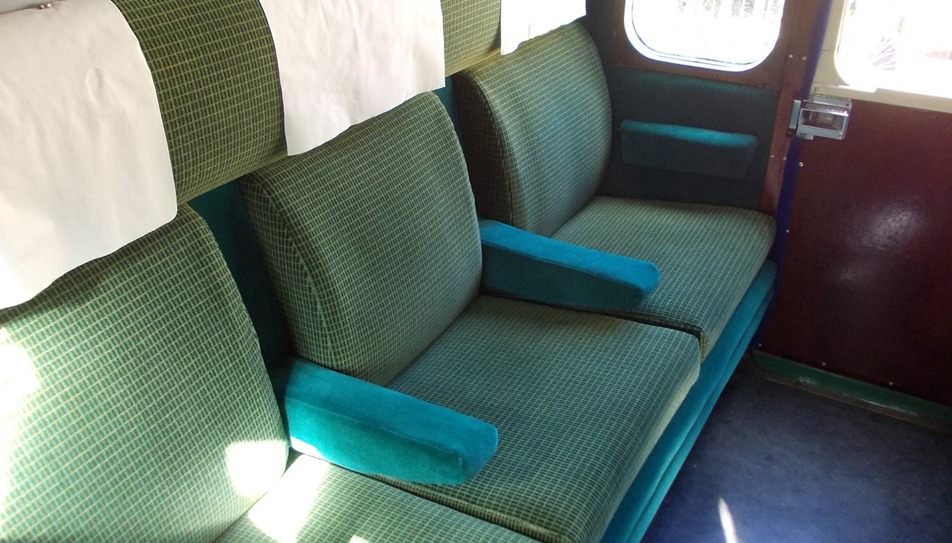 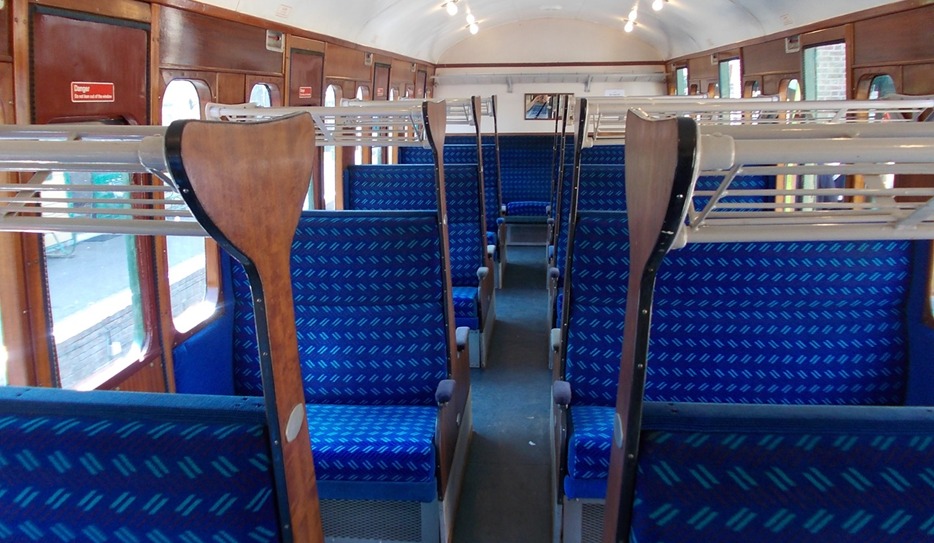 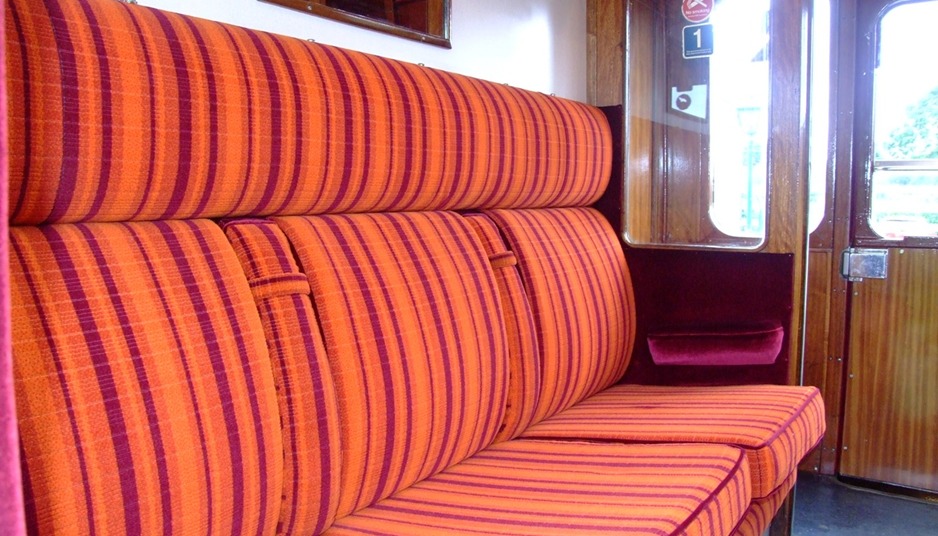 The interior of 1302 is more or less as it was when withdrawn. The seating is in pretty good condition but the woodwork is still scratched from when it was in service.

All images on this page by Amy Adams & Chris Cannon

The motor car in the current 1001 No 60018 has been restored to a Red Livery, some of the vehicles were given red from new but for cost effectiveness it was decided to use a modern material, i think this one is the one Virgin used.

Motor Car 60016 'Mountfield' has also been given a modern makeover with the Moquette which was used in the last days of British Rail. 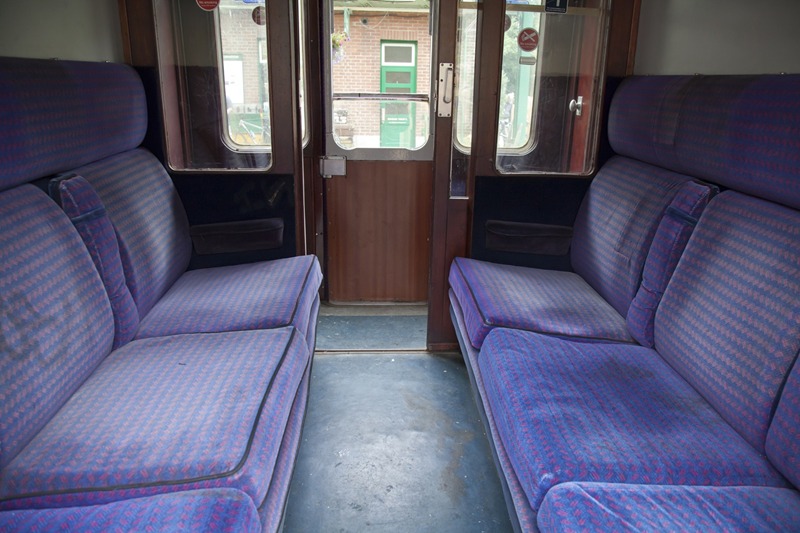 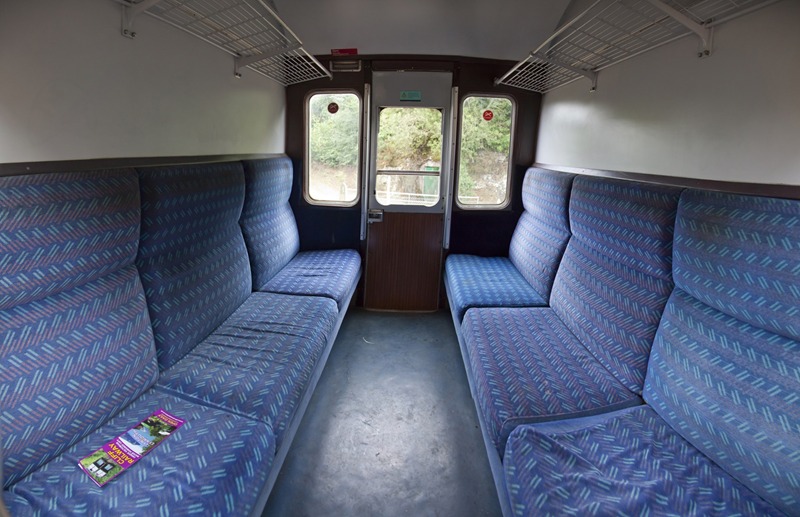 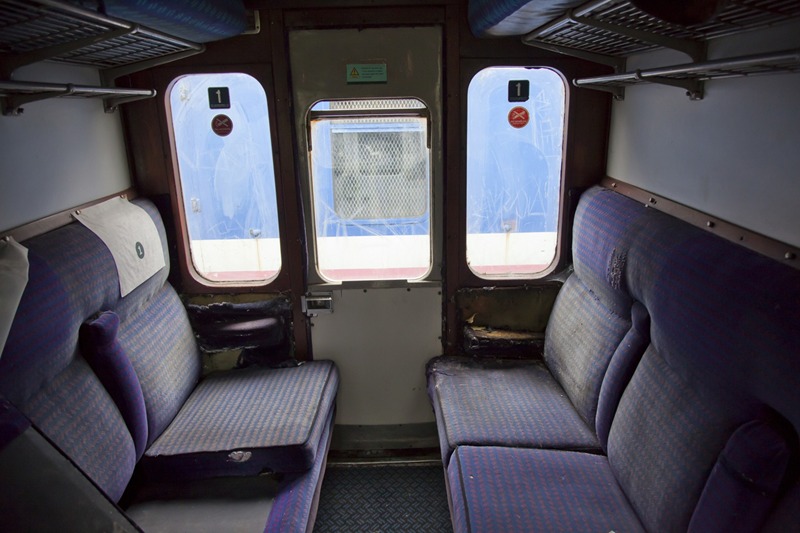 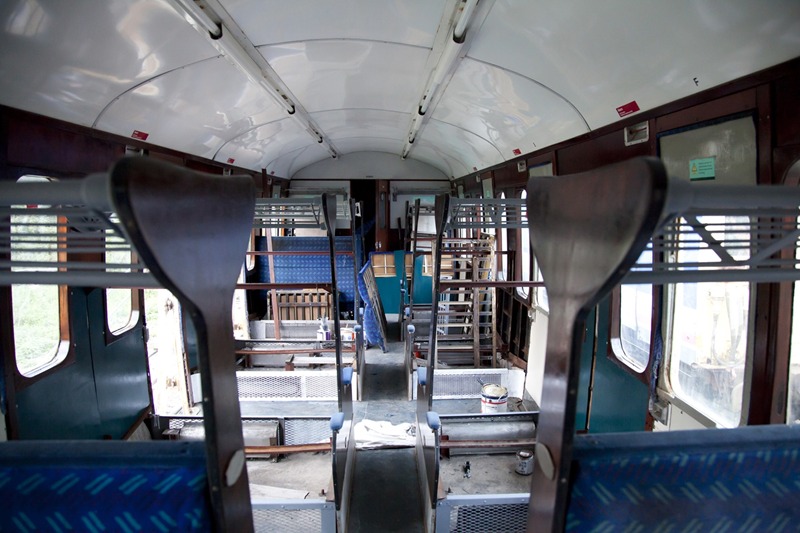 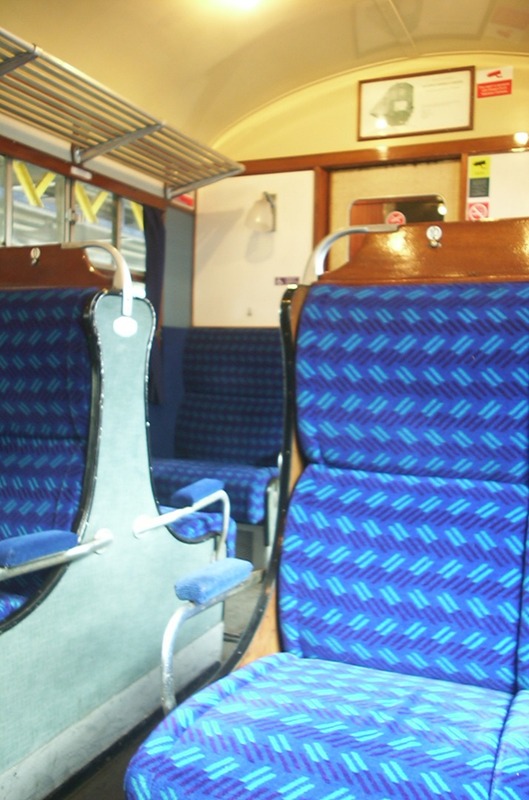 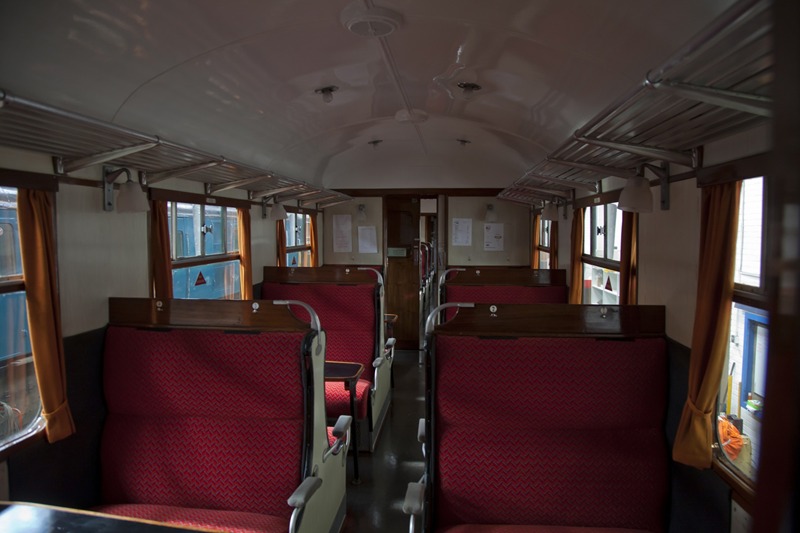 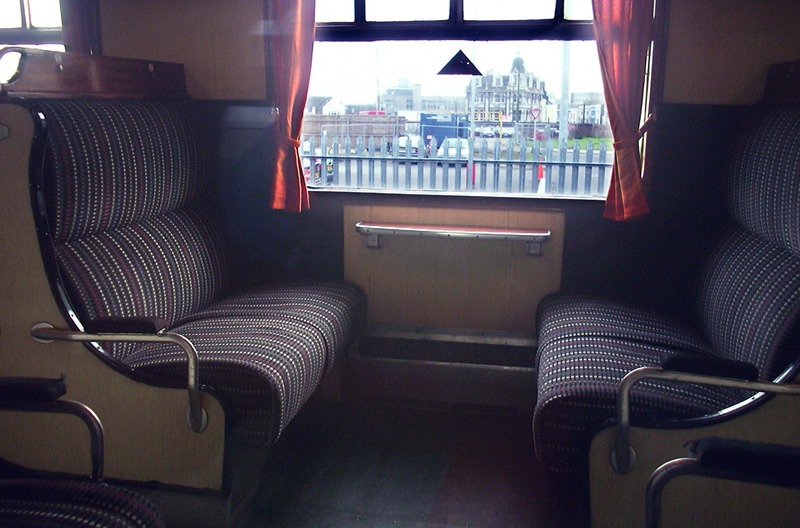 The interior of 1101 is currently undergoing a full refit on the East Kent Railway, at the moment the side panels have been replaced and the roof panels were in pretty good shape but work still has to take place on the seating material which was in a poor state when withdrawn.

The first class compartments are not in as bad a condition as they look. The side panels have to be replaced as there has been some water ingress and one headrest needs repair, but once there has been a deep clean the fabric should come up ok.

We have a more in depth ongoing article about the restoration of this unit written by the guys who are restoring it, for more info click HERE

The Mid Hants has done 1125 to a superb standard. The moquette used was a non standard pattern but it suits the unit and is of a type which could have easily been used. 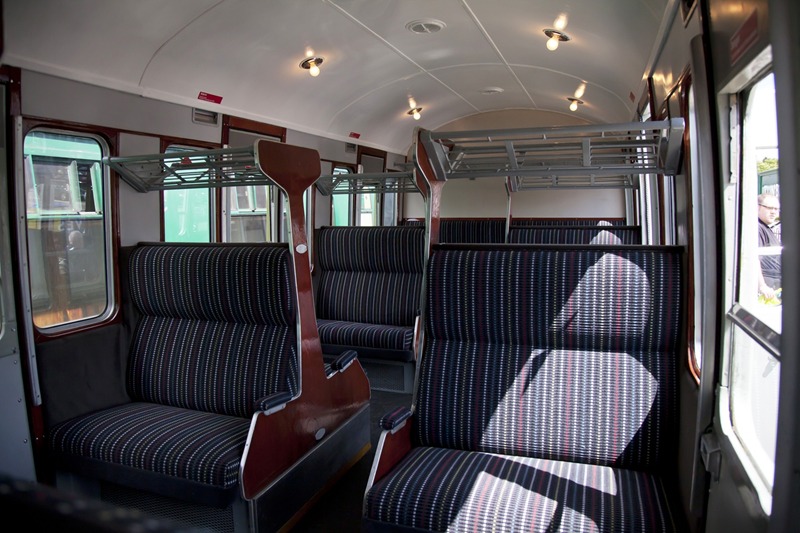 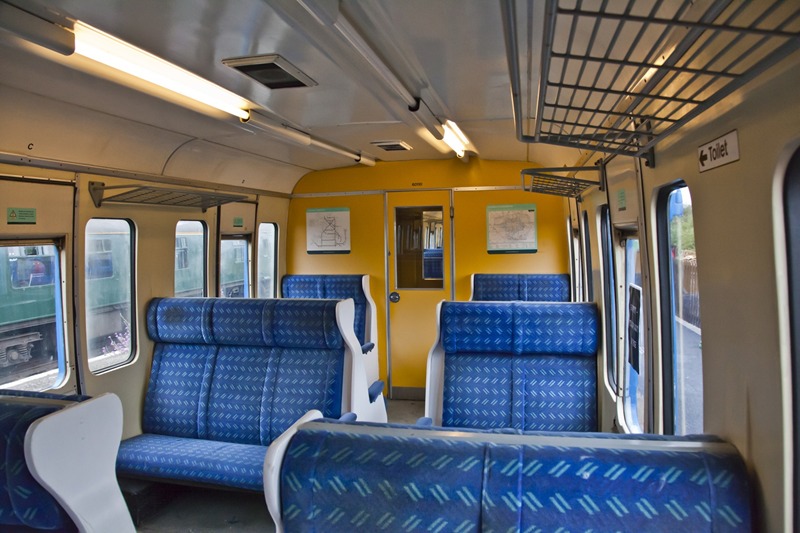 1317 has the finest restoration, not just of any DEMU, but possibly the best restoration of any railway vehicle. It is truly stunning.

Brand new Trojan Moquette has been produced and it was fortunate the unit  had the original lighting still in place, which again was restored to a high standard.

This is the first class compartment from the unit, again it's a little tired but serviceable.

The interior of 1132 has been untouched since it was withdrawn. Its clean. if a little shabby, but perfectly serviceable.

The Hastings unit on the main line has a few different types of seating material used in its restoration, above is seen trailer 60529 which has the original Trojan Moquette reinstated.

The First class cabin still has the 1980's bright orange material which was fitted to many trains in this period. Whilst not to everyones taste, this remains the only Thumper to retain this feature. It has been beautifully maintained.

In part one we showed images of DEMU interiors when they were still in service, this article shows some of the vehicles which have survived into preservation.

Some of the interiors have been restored to a very high standard and there are some which are in as withdrawn condition, also 1101 is going through a restoration so images of this unit is still of a job in progress.

So far, since going to the Epping Ongar Railway the bulk of the work on this unit has been to get it to run properly. When this photo was taken in September 2013, the focus of the work was towards a repaint and the interior had a quick spruce up so it is more or less in the condition it was when withdrawn. But if the outside is anything to go by, the inside will be stunning. 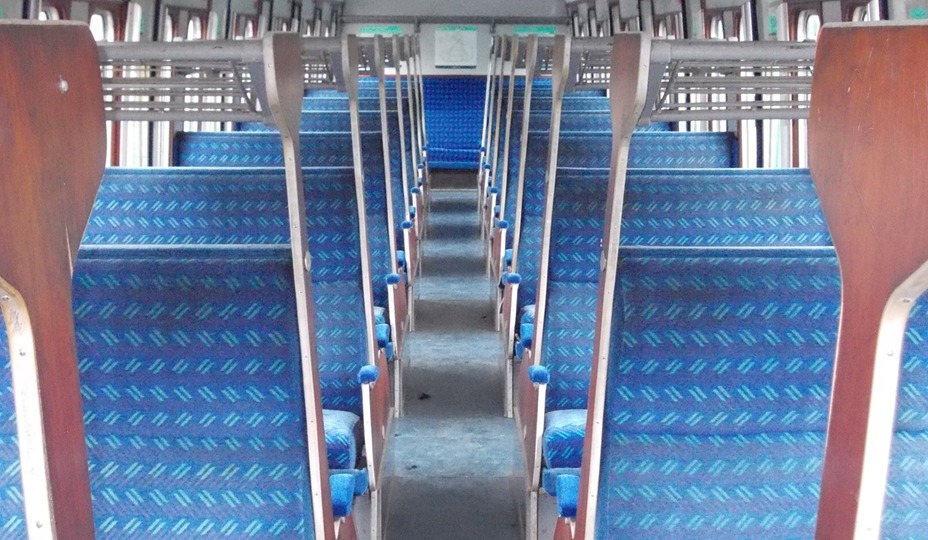 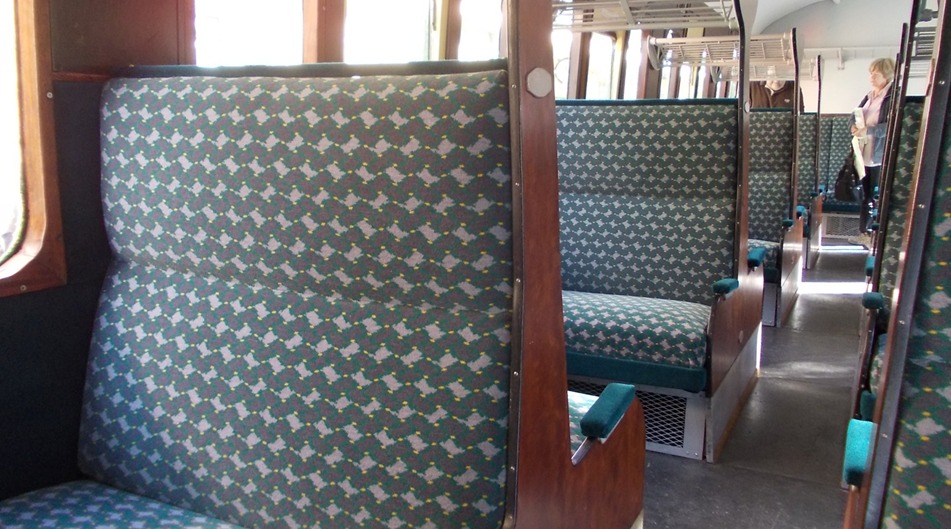 The First class has been done to an equally high standard; this time using a Green Moquette.

The trailer from 1121 is owned by the Hastings Diesel Group and like the main line unit it has been restored to a nice standard. The seating is more or less as it was when it came out of service but as it was withdrawn many years before the bulk of units, the seating was never vandalised.