By September 1973 the old buildings had gone to be replaced by the standard 70s bus stop shelter, although by 1979 a larger brick built shelter had replaced it.

The Tadpoles were all introduced in a livery of green with small yellow panels.   1202 was the first to be outshopped in blue with full yellow ends in April 1967, followed by 1201 in June.   Records show that 1202 was returned to works twice in April and May for rectification works so this must have been a time when the Tonbridge-Reading fleet was under huge pressure.   Five units were diagrammed for the line, although this was not sufficient to cover all diagrams.   There were three diagrams for a Class 33 and three Mk 1s (plus a four wheeled van), a morning diagram from Tonbridge to Redhill and return for a Hastings 6S unit, and an evening diagram for a 3D.   In theory, if all six Tadpoles were serviceable, there would be a unit changeover at Redhill in the early evening but this rarely happened.

The old buildings at Edenbridge seen in July 1971 - Author's collection 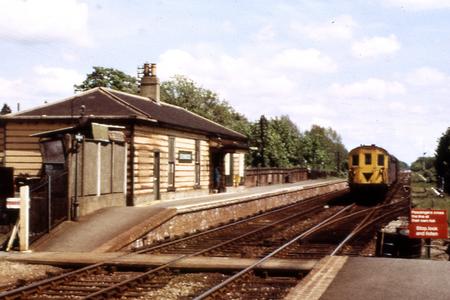 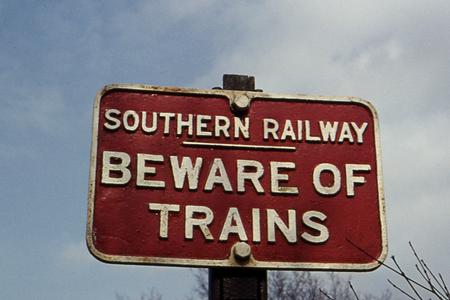 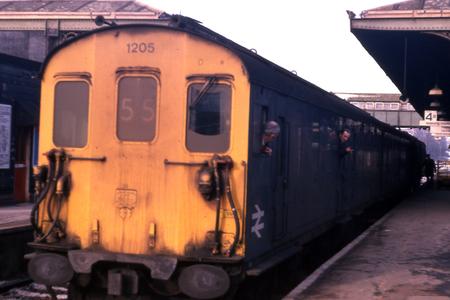 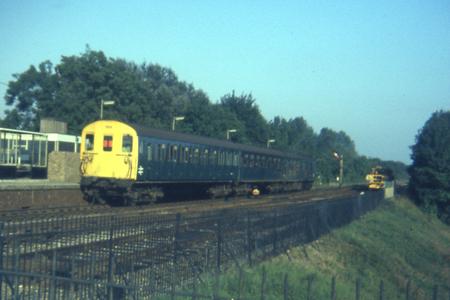 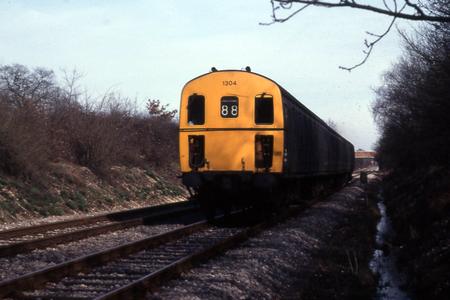 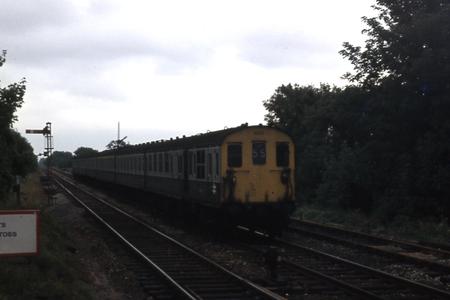 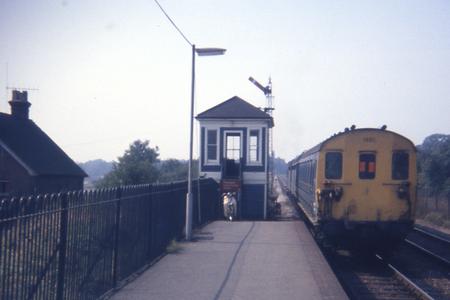 The Reading- Tonbridge line carried a lot of mail. On 6th January 1979, the driver and guard wait for the loading of mail to be completed at Guildford.   As mentioned in the text, unit 1205 weas never given the normal black triangle to indicate the position of the guard's compartment.

On 20th August 1975, Hastings unit 1032 arrives at Edenbridge working the 1615 school train from Tonbridge.    The declassified trailer firsts that replaced the open seconds can be clearly seen.

Life by the line

Photos by the author unless stated

I spent most of the first 25 years of my life in a house a stone’s throw from Edenbridge station on the Tonbridge-Redhill line.   I know it was stone’s throw because one night some oik on the down platform did actually throw one through my bedroom window.    We were at the bottom of the embankment on which the station sat, and throughout her years in the house my late mother lived in constant fear that a train would one day derail and crush us all.   However it was the house in which my father had been born (and where he later died) and moving was never on the cards.

As well as living right alongside the Tonbridge-Redhill line, I could see the Oxted-Lewes line (as it then was) from my parents bedroom and hear the trains on it, particularly once the diesels arrived.   When I was a child we did not own a car so shopping trips took us to either Tonbridge or Tunbridge Wells.   I generally preferred going to Tonbridge because it was a shorter walk to the station, and if we went to Tunbridge Wells we more often went by bus than on the Oxted line.

For the first eight or so years of my life the line was operated by steam, with the gradual introduction of diesels.   My first recollection of the Southern demus is of the 3D “Oxted” (or as they were originally known, “East Sussex”) units, one of which worked up to Redhill during the summer evenings when we were playing  a family game of cricket in the garden.   This must have been in 1962 when they were brand new.   I thought they were particularly attractive in shiny all over green – no yellow panel in those days – the smooth curved ends and the smart orange handrail.   As a small boy I found the hissing steam engines a bit scary and so when actually travelling or waiting on the platform I preferred the diesels.

I also remember the Hastings units hurrying through on Sundays when the main line via Sevenoaks was closed for engineering work.    Although the term “Thumper” would not be coined for many years to come, thumping fits well with my memory not just of the engine noise but of the vibration as they rattled through.

The 3R (later Class 206) “Tadpole” units arrived in January 1965.   I was too young to know about the makeshift way they were formed, but when I was waiting with a couple of school friends for our lift to school we would play “guess which Tadpole” when a train was due.   Thus I learned they were numbered 1201-1206.   They were of course a quick and cheap compromise to replace steam, and were not ideal for conductor guard working.   A delay in reaching agreement with the Unions meant that initially the guards did not collect fares and the station ticket offices remained open.   In September 1967 I started at a secondary school in Tonbridge and as our student season tickets had not arrived I purchased a ticket from the old Edenbridge ticket office.   The last booking clerk at Edenbridge went on to be signalman at Penshurst.

Once I started secondary school I met up with some other enthusiasts one of whom had access to a lot of inside information – his father was quite a senior manager – and from this point on I was better informed and took a more detailed interest.   The absence of a unit in works would invariably lead to increased substitutions of 3Ds or 3Hs and we would soon work out which unit was missing and likely to reappear in a fresh coat of paint.   The 3Ds were of course even less well suited to conductor operation.   During the off peak period they would often operate with only the centre trailer unlocked – as the service was standard class only, passengers could use the first class compartments and have access to the toilet.   The conductor would generally travel in the centre trailer, giving the “right away” to the driver by means of a hand signal.   This meant of course he (and in those days they were all “he”) had no communication with the driver other than by the emergency cord.   This arrangement would of course be unthinkable nowadays (yes I know about DOO but this was a line with semaphore signalling from small block posts and no radio or mobile phones).

Apart from the lack of corridors, substitute units were not suitable for the heavy mail traffic on the line.   I recall that the up train through Edenbridge at about 7.10pm was booked a stand of about 7 mins at Edenbridge for the loading of mail by postal staff from Edenbridge sorting office ; one of those situations where the black triangle helped the GPO staff be in the right place (except that 1205 never had a triangle).   The Tadpoles had an area at the inner end of the driving trailer where three compartments had been gutted for mail (although labelled as “luggage”).   If a 3D or 3H was substituted, one seating area would be used ; if you were lucky, the seats cushions would be lifted up so the mail bags didn’t go on the seats, but this didn’t always happen.   The single luggage compartment at the outer end of the 3H driving trailer wasn’t big enough for all the mail.

The driving trailers on the Tadpoles were usually opened on the main Tonbridge school trains (and no doubt school trains into the other major towns as well).   Some guards liked to herd the students into these carriages exclusively because they knew we all had tickets.   One morning at Edenbridge, when a Tadpole was substituting for a Hastings unit on the 07.44 to Tonbridge, the train arrived with the guard leaning out shouting “all the students down the front”.   One fellow student (who is now a Bishop as it happens) objected to being “herded like carrier pigeons”, leading to further delay while the guard had a good rant.   Actually, we found most of the guards were extremely friendly individuals always willing to chat about railway matters.   One was also a lay magistrate, known to all his colleagues as “the judge”.

My usual school trains were the 07.44 from Edenbridge to Tonbridge and the 16.15 Tonbridge-Edenbridge.   The morning train was the 07.27 Redhill to Hastings and diagrammed for a 6S (although we sometimes had a 6L and on at least one occasion a 6B).   This unit worked up as the 06.35 Tonbridge-Redhill and its up working was my alarm clock.   I would look out so I could alert my friends as to which unit we had.  On dark winter mornings I couldn’t see the unit number but I could read the individual carriage numbers as it passed the floodlight on the sleeper crossing, so I became an expert in matching carriage numbers to units.    In those days, there were Hastings units in various livery variations which also helped in recognition, as did the appearance of 1007 which at that time boasted three side corridor trailers following the Hither Green derailment.   These trailers, which were rendered spare by the creation of the Tadpoles, later found there way into unit 1032 with 1007 becoming a standard 6S again.

The first class trailer was popular with students although some guards turned us out.   As this was the first down train of the day, in the leaf fall season we would travel over the leading traction bogie to monitor wheelslip, which was most common on the upgrade from Penshurst tunnel to the summit midway between their and Leigh.   A good dose of wheelspin when the driving axles also had flats would make some passengers look quite alarmed.

The normal off peak service from Tonbridge departed at 46 minutes past the hour.   However the 15.46 did not run, and the unit laid over until 16.15 to suit school traffic.   The driver would usually shut the engine down during the wait so occasionally there were starting problems.   There always seemed to be problems on the first really hot day of the year, when units would overheat all over the place.   This train was very crowded and we would often spend an extra half an hour watching trains at Tonbridge and catch the 16.46 instead.   A few years after I left school, local traffic demanded the reinstatement of the 15.46 departure, and an extra schooldays only working was provided as far as Edenbridge, formed at various times of a Hastings or Oxted unit.