Summer 1977, and for once there are no passenger trains at all at Edenbridge as relaying takes place in the up platform.   The crane is on the points where on another occasion the TRM derailed. 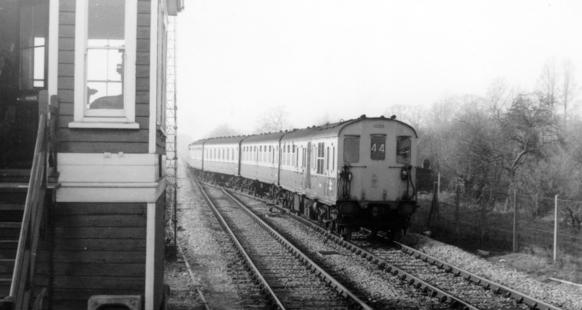 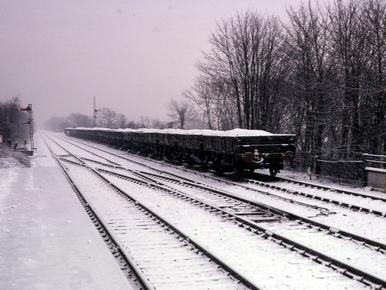 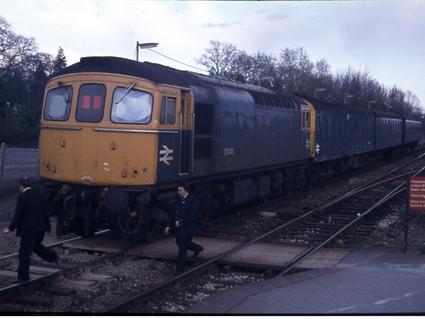 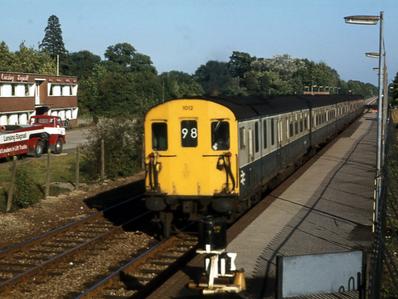 Left : During engineering work in November 1977, 1205 prepares to set off for Tonbridge from the up platform at Edenbridge.

1012 seen from the steps of Edenbridge box working a diverted up Hastings service, 16th September 1978 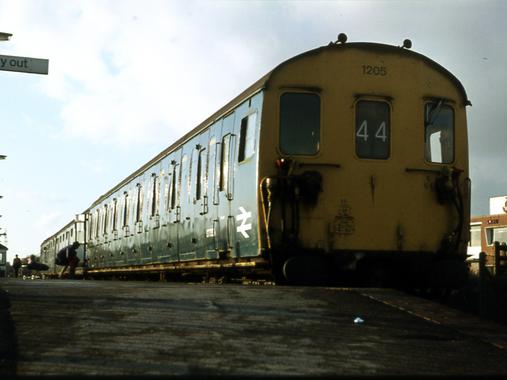 November 1977 ; track relaying on the bridge at Troy Town where the Redhill-Tonbridge line bisects Little Browns Tunnel on the Uckfield line. 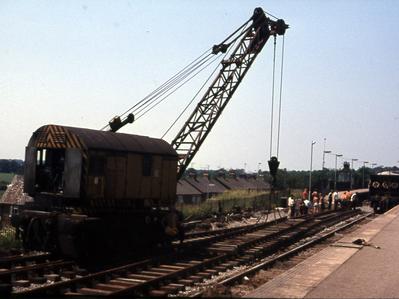 Life by the Line - part 2 : Engineering works and incidents

3rd September 1978 and the loco has been left with the spoil train, along with the unusual sight of two brake tenders. 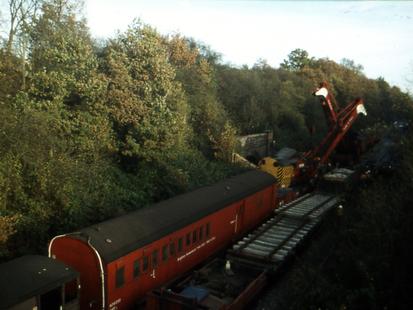 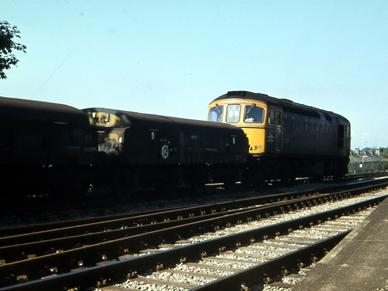 My first outing with my SLR camera, October 1974 ; on the occasion referred to on the text, unit 1006 shunts at Edenbridge while operating the Tonbridge-Edenbridge shuttle.

A spoil train in Edenbridge up siding on 23rd January 1979 - no trains are running due to an ASLEF dispute.

Edenbridge box was usually staffed by two permanent signalmen, a Mr Harman and one George Groves, who lived in the station house at Edenbridge Town station.   The box closed overnight and on Sundays.   However, when there were engineering works, they would work a seven day week although there was usually a relief man for the night shift to enable Messrs Harman and Groves to fit in their usual weekend shift change.   Despite having had at least one heart attack, Mr Groves always cycled to and from work, as did Mr Harman.   Later, Mr Groves retired and was succeeded on a semi-permanent basis by a Relief Signalman whose name I will not mention as I believe he still works on London Bridge panel.

Most activity during engineering works was of course loco related, with the Thumpers simply making their hourly (or on Sundays often two-hourly) appearance to terminate and return whence they came.   However towards the end of Sunday the person in charge of the possession would have to make sure that the passenger train didn’t impede the movement of engineers trains into and out of the possession.

I recall one Sunday when the person in charge of works was Harold Hobden, then Station Master at Haywards Heath and later the General Manager of the Bluebell.   During the middle of the day, he called for the Track Relaying Machine to be brought out of the siding to begin relaying.   I also recall that there was, an unusually, a Class 08 shunter on duty.   As it pulled the TRM out of the siding, some rotten sleepers spread, depositing the machine on the ballast.   Harold dined out for years on being the only manager ever to have a TRM off the road in the middle of a block.

The derailment meant that the passenger service was no longer able to use the down platform.   Trains arriving from Redhill had to stop short of the platform, shunt back onto the up line (requiring the points to be clipped and scotched) and then into the up platform.   Passengers could not use the foot crossing to the main car park on the down side and were directed via several flights of steps to the main road where the bus should have picked them up.   Unfortunately the bus driver failed to wait for the right away from the Area Ticket Inspector who was on passenger service duties, leaving them with two hours till the next replacement bus.

If the obstruction was between Godstone and Edenbridge, there would be a shuttle service between Tonbridge and Edenbridge.   On one occasion a Hastings unit was fielded for this operation.

Weekend engineering works would always create interest for me during my years of living by the line.

Edenbridge had an engineers’ siding on the up side and two crossovers, so during works it would often be both a terminating point for passenger services and a base for engineering operations.   Usually in the middle of the week preceding any works, a train of empty spoil wagons would arrive in Edenbridge siding.   Usually it would be left and the locomotive would depart light, but occasionally a Class 33 would be stabled with the train ; those were the days when the railway could afford to leave a locomotive in a wayside siding for three of four days.   Generally on the Thursday, the location of the works would be revealed by the imposition of a temporary speed restriction.

Minor freight derailments were quite common.   However  the only derailment involving a Thumper was that of a diverted Hastings train at Crowhurst Lane End.

The floods of September 1968 did result in a diverted Hastings train becoming trapped at Edenbridge for several days.

Sadly there was the odd Thumper breakdown to contend with.   I also remember one morning that my late mother was due to travel on the 06:50 Edenbridge-Redhill, the outward working of my school train.   By 7.30 it had not arrived and the signalman, the aforementioned George Groves, was becoming concerned.   My mother, who was on her way to an interview in Bognor Regis to take up teacher training as a mature student, had by now persuaded my father to abandon going to work in order to give her a lift.   Eventually the Hastings unit came slithering out of the mist at about 7.40, terminated and formed the Tonbridge school train, while the next up train, the Crompton hauled 0702 Tonbridge-reading, seemed to scamper along without any trouble, despite the apparent presence of the infamous leaves on the line.

Hastings demu diversions were also a common feature on Sundays.   As the up Hastings trains left Tonbridge two minutes ahead of the Reading stopper, the local service had to be retimed although the opening of the intermediate signalboxes allowed some quite short headways.   My friends and I made a trip from Tonbridge to Charibg Cross via Redhill one Sunday afternoon.   We were disappointed that the up service made stops at Redhill, Merstham, Coulsdon South and East Croydon but the down service ran non-stop from Waterloo East to Tonbridge including the down middle road at Redhill.

In later years there were a couple of Saturdays when Hastings services were diverted, and this was after the introduction of the twice-hourly service.   I was enjoying the hospitality of the relief signalman in Edenbridge box as Hastings fasts passed outside the box.   The signalman gave “out of section” to both Godstone and Penshurst as they approached, and both boxes responded by offering the next trains simultaneously.   It was a worthy demonstration of the ability of the traditional signalman to distinguish bell codes againstsome pretty fearsome background noise.