Martin shows his book to Jim Russell whilst onboard 1125 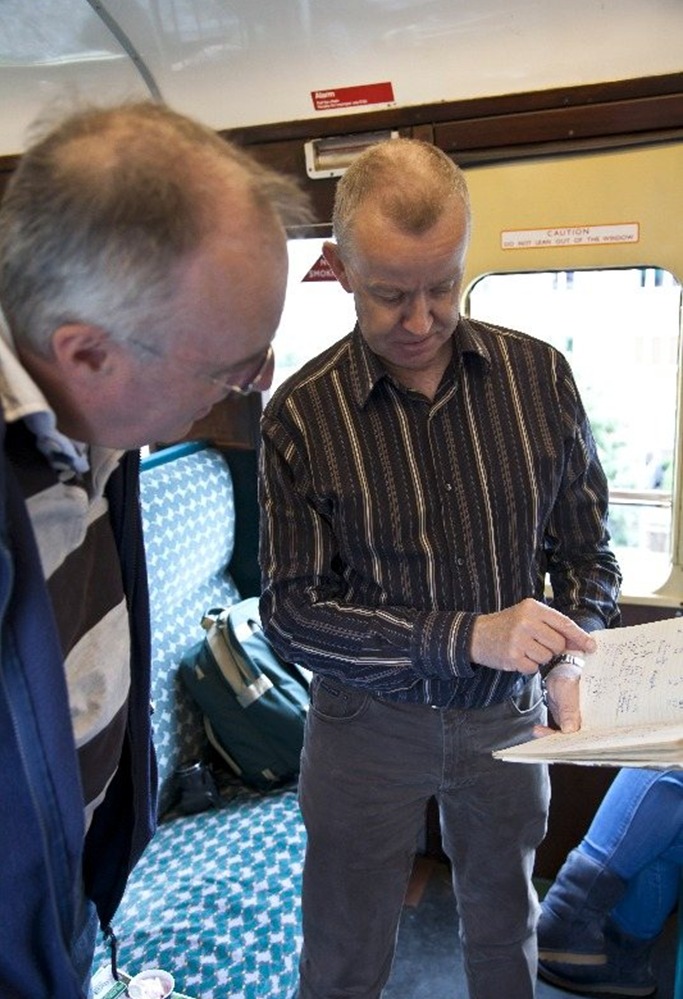 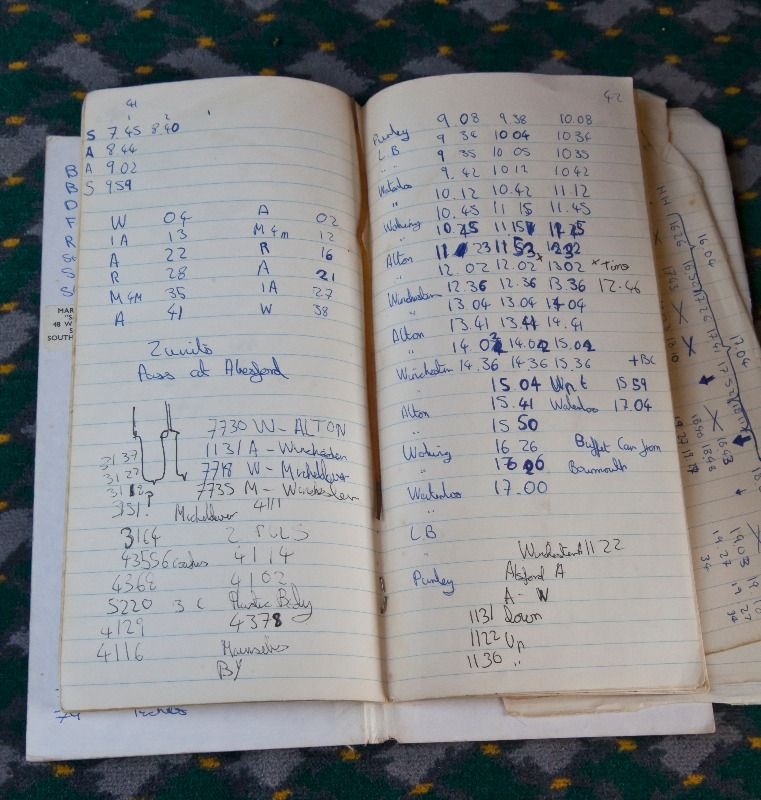 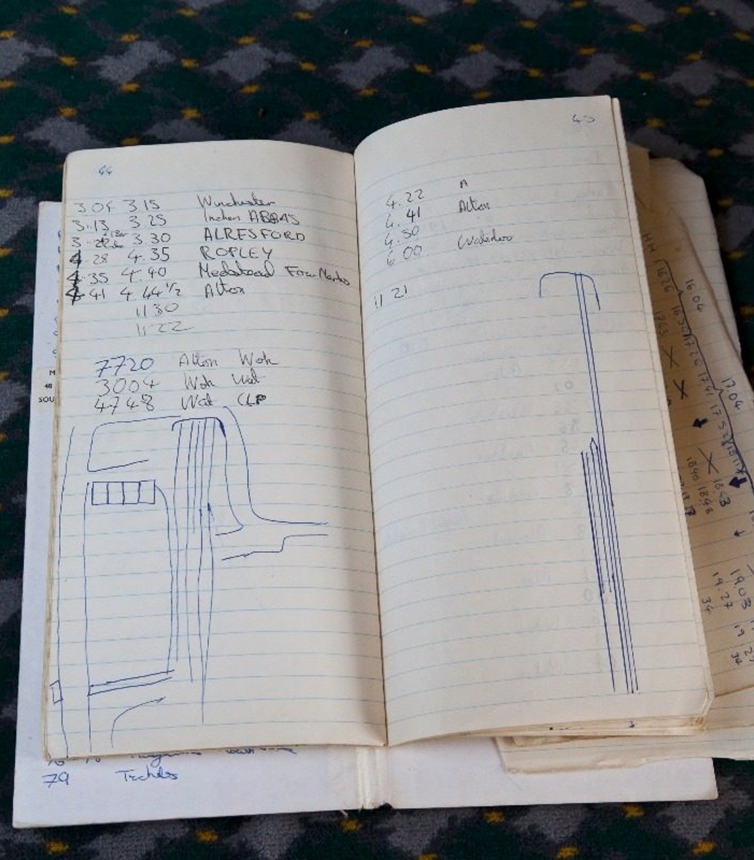 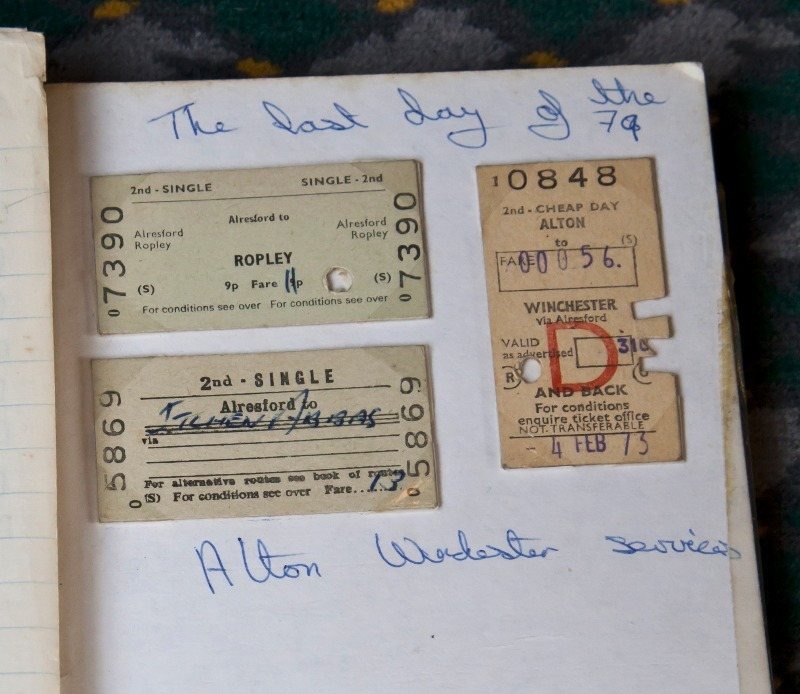 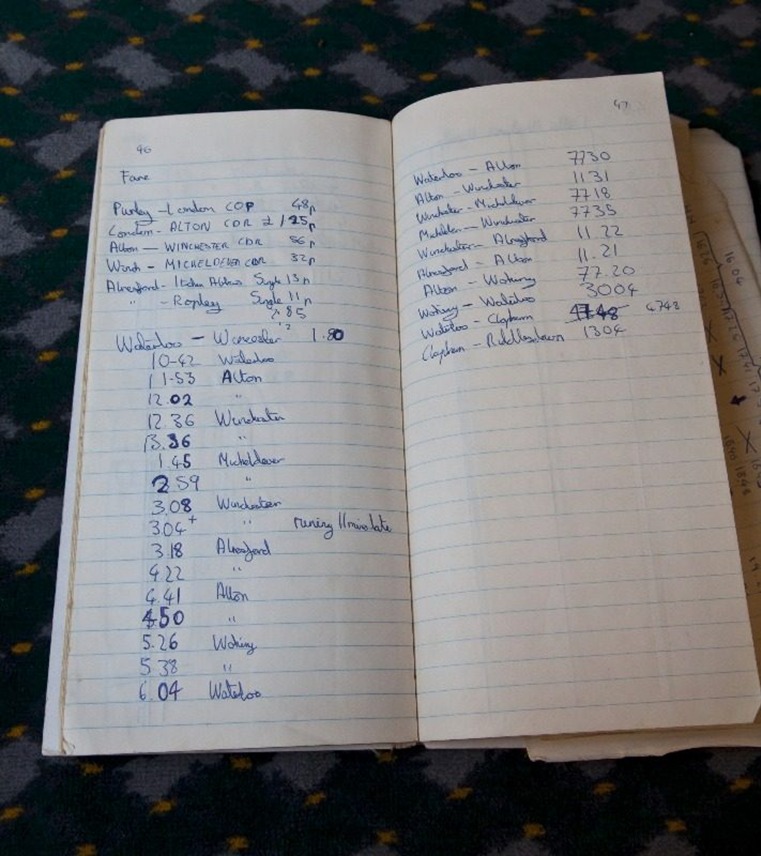 On the first of our Not The Last Thump Celebrations at the Mid Hants Railway one of our group members Martin Wright came along with his notebook from his old spotting days in 1973.

Martin had travelled over the line on the last day of service on a Thumper in 1973, so as you can imagine we were all fascinated by this so we had to make it into an article.

I persuaded him to write a little about the day which makes fascinating reading.

My memory of the day ...I was 15. Travelled on my own all day , started at Purley. My dad would have dropped me off  with about five pounds in my pocket; a lot of money in those days. I caught the 09.38 to London bridge which would have been a EPB from Caterham and Tattenham Corner and then changed to get a train to Waterloo east. Cost so far .48p might have got away half fare !!

I then purchased a cheap day return to Alton cost £1.25. Unit was a 4VEP 7730. I always detested Veps. I wanted to get a 33 to Woking and change but being a Sunday, no chance. Departure time from Waterloo was 10.42 and we arrived on time at Alton 11.53, leaving enough time to buy from the booking office another ticket to Winchester, cheap day return just 56 pence.

My next unit was a Thumper 1131 left at 12.02 arriving at Winchester at12.36 having passed another unidentified unit at Alresford . The units were packed with enthusiasts and local people all wanting a last chance to travel.

I then had a hour in a pub by Winchester station; pint and a pork pie. I was underage but no issues !

I then caught the 13.36 to Micheldever by another VEP. 7718 arrived at 13.45 while a last day trip was part of my plan and a walk round the yard was my main objective. Thumpers and Veps were easy to pick up; Subs would be around for another 10 years at least ! . The Cors had been with drawn two years earlier, but some still lingered which left me wondering why.

This was the highlight for me so much to admire. I got in the cabs , looked around but never thought about taking anything home as a souvenir. This was pre health and safety and I was trusted to look around without causing damage take anything.

Sadly I did not take any pictures that day , just noted it down in my trusty note book that has survived, divorce, moving, down sizing, flood, famine, etc etc

I I then reluctantly caught the 14.59 back to Winchester , but had had a hour and a quarter that I could never repeat.

At At Alresford I Remember  thinking how old fashioned the station was with full semaphores and old style ticket machine , I bought two tickets
Alresford to Ropley single , cost 11 pence and a single to Itchen Abbas cost .13 pence

As it was a school night I reluctantly got on the 16.50, another Vep 7720 to Woking . My objectives achieved of getting a last run on the line, getting the 3 units running that day and visiting Micheldever yard.

I had noted engineering work in the Waterloo area on the way down and on a hunch got off at woking on the way back, at 17.26

Here I was fortunate to get a Rep and TC on the 17.38 to Waterloo , I travelled in the motor coach and we were diverted my the underground lines of east Putney back into Waterloo arriving at 18.04,

A Sub 4738 took me to Clapham junction and then an Oxted 1304 back to Riddlesdown , where I could walk home was tad shattered , school the next day .....

I hope you can make a article out of these thoughts and notes from that day 42 years ago...

In some ways so much has changed , in others when I travelled on the Mid Hants the other day nothing has changed in all those years

Below are some images of Martins notebook from the day