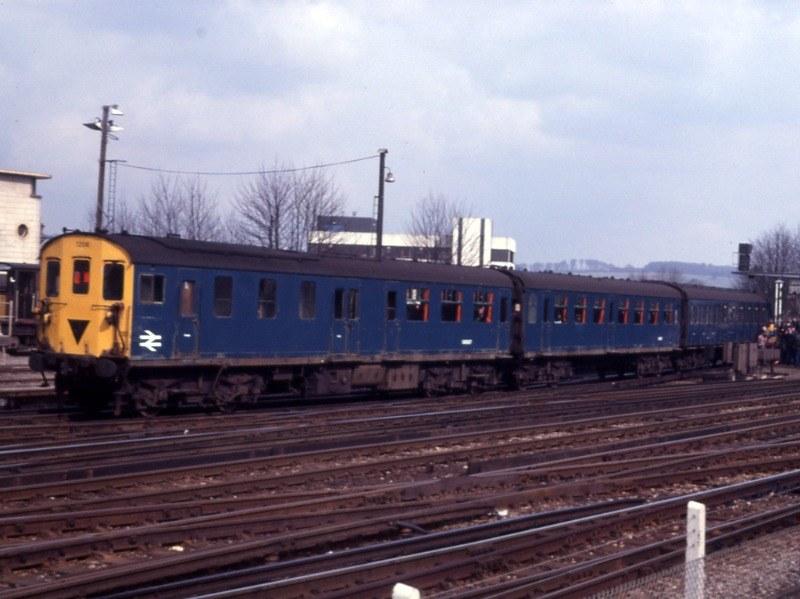 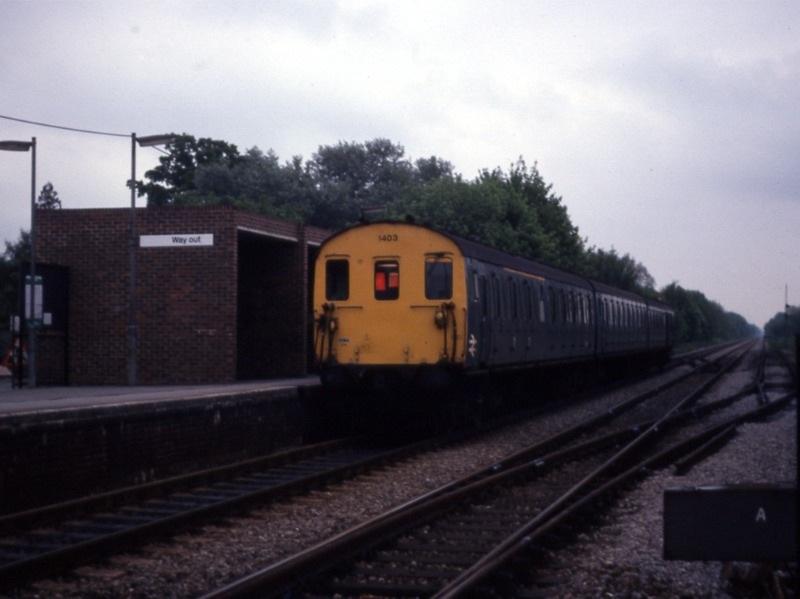 The need to replace the Tadpoles arose initially because the Hastings line service was increased to twice hourly, one running semi-fast.   However, on the North Downs line, there were also plans to introduce a semi-fast Reading-Gatwick service.   The mechanical units began to appear in 1979 ; the original plan was to use newly transferred Class 101s, but they arrived in a poor state and a mixture of Southern and Western units held the fort until the Class 119s arrived.

Additionally, the service was run very occasionally using the short-lived 3Ts which were created by inserting the redundant Tadpole driving trailers in the middle of the remaining 2Hs. These were allocated to Eastleigh.

This is a short article by Tony Watson, aka Tonys trains and buses, who has generously allowed us to use a number of his pictures for this website. He has been able to supply us with some more detailed background of the transition from steam to Diesel on the North Downs Line.---------We are very much obliged that he has taken the time and effort to write this article. Thankyou.......

As I lived alongside the Redhill-Tonbridge line from 1960 until 1981, I read the section on the Tadpoles with interest, and I wondered whether you might want to include a little more detail about the other types of units involved and the transition to diesel mechanical units.

The five Tadpole diagrams were not sufficient to cover all the peak workings, and there were three loco hauled sets of three coaches, plus a van, hauled by Class 33s, in daily Monday-Friday use until the May 1978 timetable.   One set was also used on Saturdays.   Two sets that spent the day at Redhill were worked to Brighton for servicing.   In addition, a Class 207 unit was worked from Tonbridge to Redhill on the rear of the 20:15 Tonbridge – Redhill, and then worked three evening trips.   This was because of an unbalanced working.   Finally, the 06:35 Tonbridge-Redhill and 07:27 Redhill-Hastings were worked by a 6S Hastings unit.   There was no obvious reason for this since there was a 3R at Tonbridge that didn’t start work until the 08:05 Tonbridge-Reading ; it may have been historic in that in steam the days the 07:27 from Redhill was a through train to Eastbourne via the Cuckoo line.

With six units for five diagrams, it was not unusual for a 3D or 3H to appear when one of the Tadpoles was in works, but always a St Leonards based unit, never an Eastleigh one.   The first Reading-Tonbridge and return was worked throughout by a Reading driver and could occasionally produce a WR dmu if the Tadpole failed.   However, only the top link Reading drivers were trained on the Tadpoles !   The Tadpoles were maintained at St Leonards, a long trip round as they could not use the Hastings direct ; the unit that spent the night at Tonbridge was fueled at Chart Leacon .(Ashford)

Before the replacement of the Tadpoles, there was first of all the decision to withdraw the loco-hauled sets from 1978.   This is hardly surprising – the run rounds were inevitably problematic, particularly at Reading where Southern trains normally used a terminal platform.   At Redhill they could run round using the yard alongside Platform 1 without fouling the main running lines.   So from 1978 these workings were covered by Eastleigh based Class 205s, bringing Berkshire units to the line for the first time.   Electrification in Hampshire had rendered some spare.