One vehicle which many of you have noticed is no longer on the main line is motor car 60000.

This was the flagship power car but when it was withdrawn for overhaul its place was taken by 60016 the CDL was then introduced and 60000 was left out, and as 60019 is fitted with CDL its in a more advanced state than this one is.

Other Vehicles at St Leonards 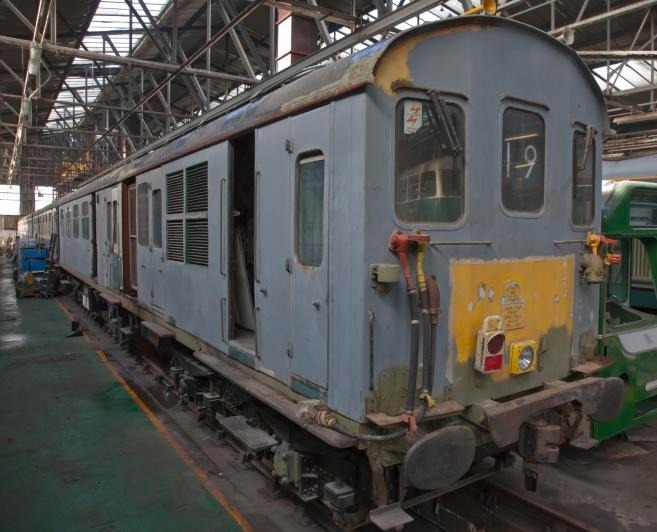 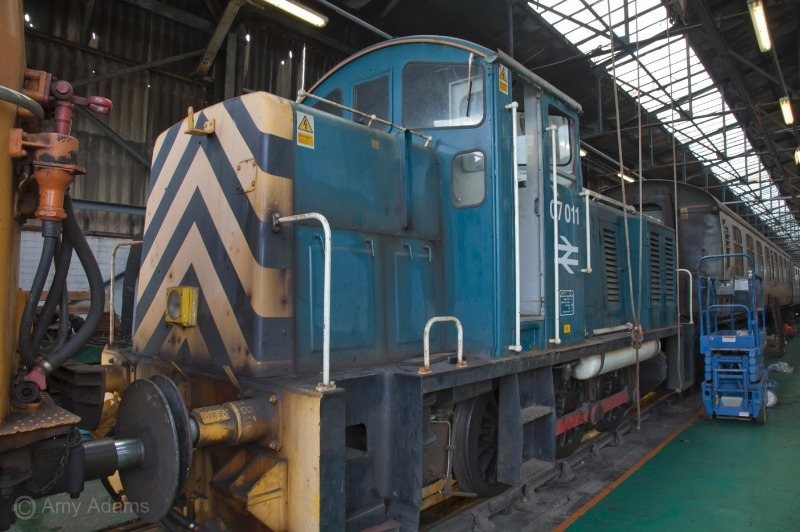 This is the other power car which hasn't seen action on the main line in preservation. It is currently having a lot of panelling replaced as it is intended for this to make an appearance on the main line towards the end of 1014

When the CDL was being developed it was a new system and Network Rail wanted a vehicle which could be used as a prototype so 60019 was chosen, so because 60019 now has the CDL fitted, its a case of body overhaul to get it back on the main line. 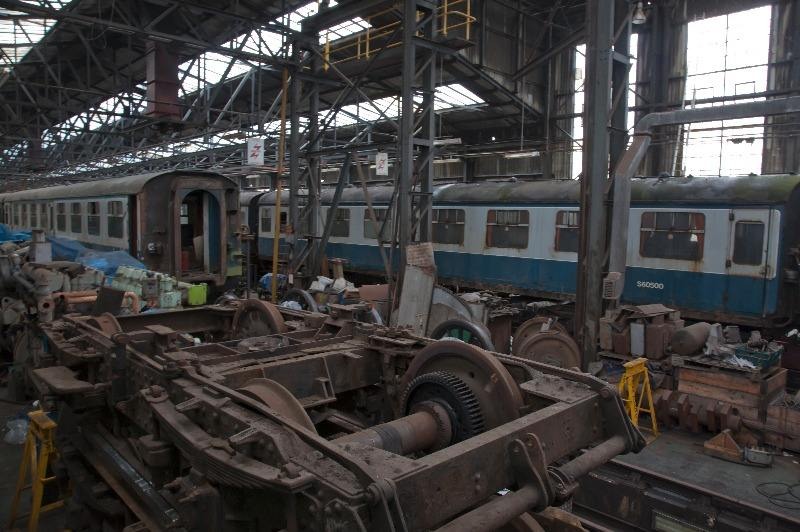 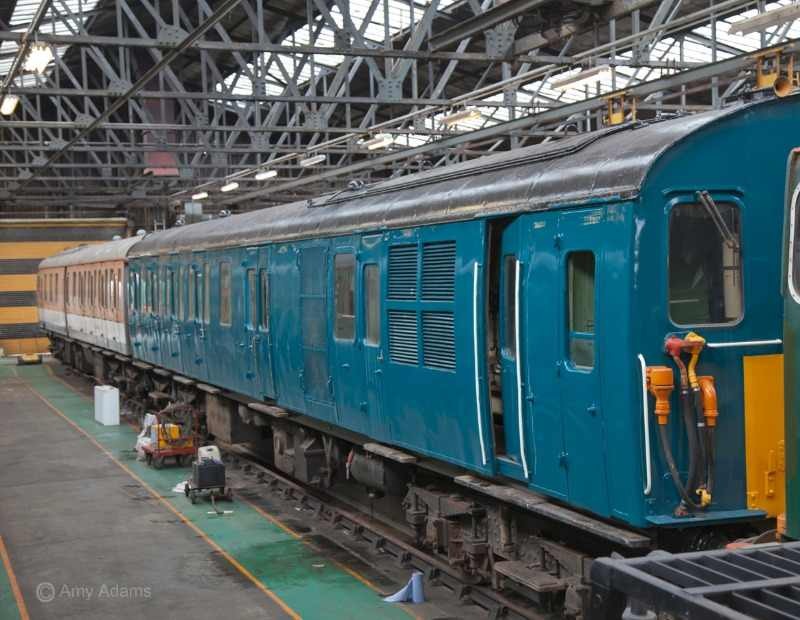 This shot shows some of the vast size of the depot, this is taken towards the rear where the roof is of double hight to enable engine changes.

In the foreground are some spare bogies for the motor cars, you can see the area where the traction motor would be placed and the drive gear on the axle.

In the rear is another shot of 60500 from unit 1001 and to the left is 60528 which is currently undergoing restoration and will be the next coach on the main line. 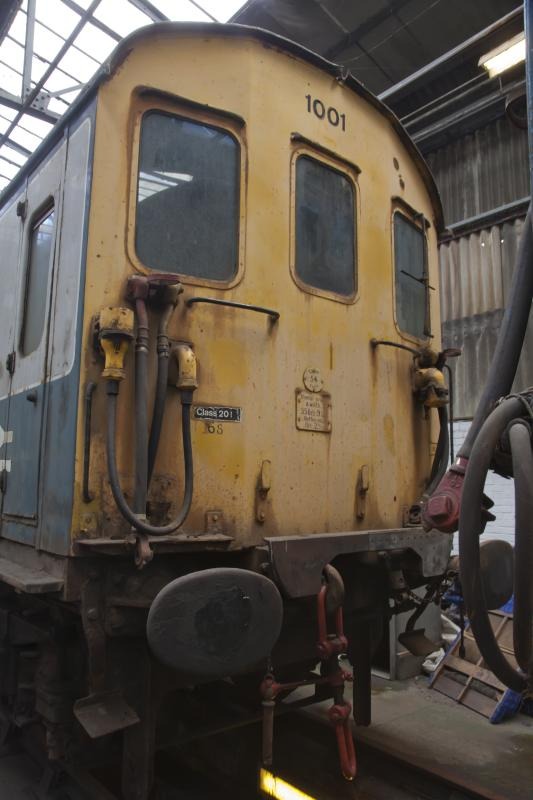 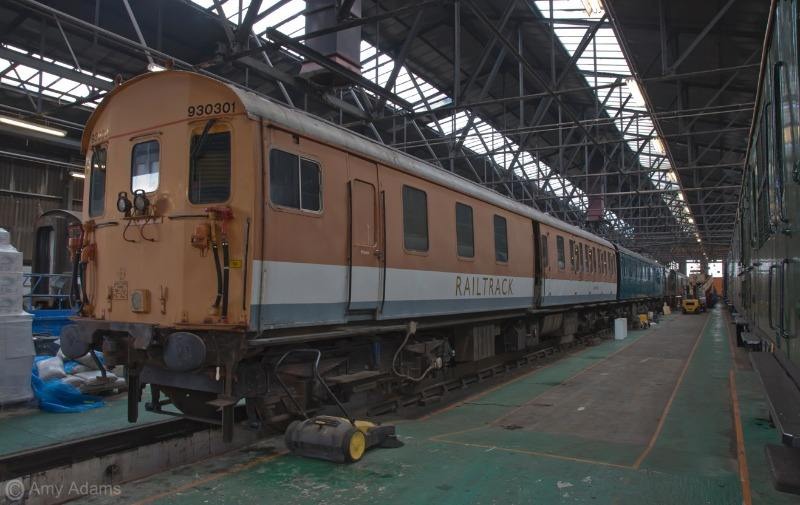 ​The engine room on 60001 which is untouched since withdrawal in 1985 and is now a real time capsule.

The stored vehicles at St Leonard's are still in the condition in which they were withdrawn.

Many people think of the main line unit as No 1001 but its actually a hybrid of three units with two ex EMU vehicles. 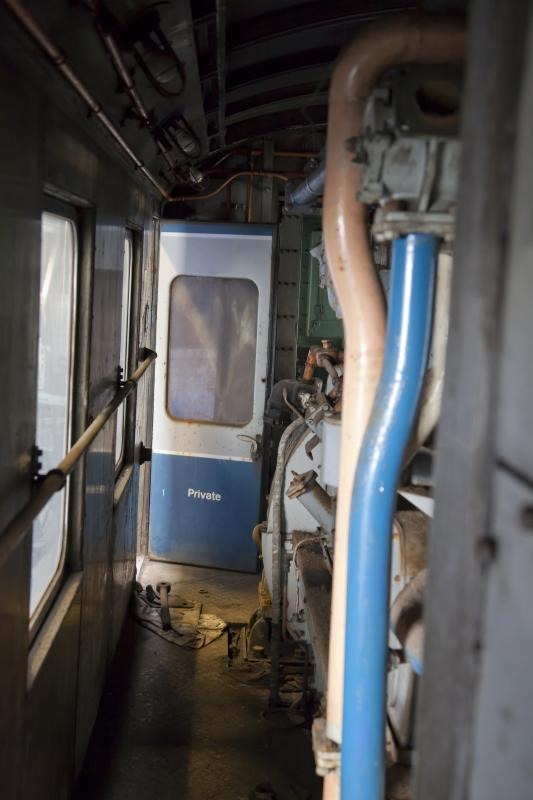 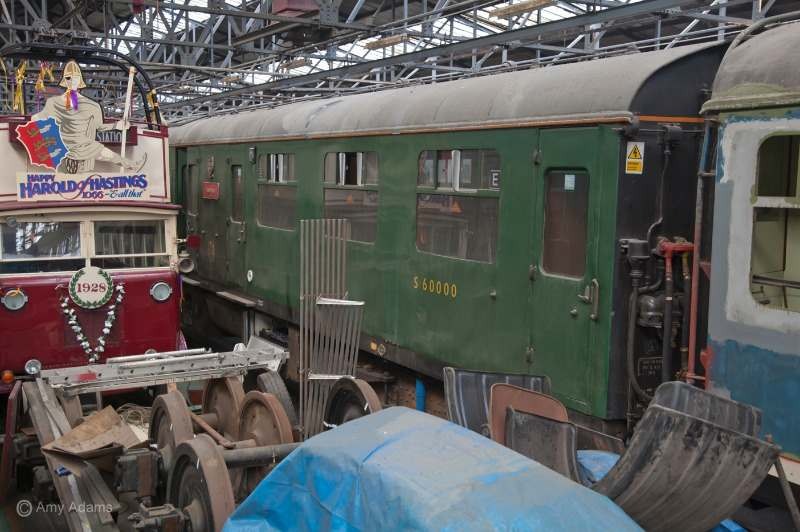 Another type of vehicle in the Hastings units were the First Class coaches, each unit had one of these and HDL has save three of them, this one is 60709 from unit 1013 they also have 60708 from 1012. There has a lot of criticism that HDL hasnt put a first back on the main line the main reason why is all down to cost.

For running on the main line there are many modern safety requirements, which have to be adhered to, one of them being "Central Door Locking" (CDL) as well as miles of electrical wiring which has to be installed, each door has to be modified at a cost of around £5000 per door, a second class coach has only 6 doors where a first has 11.

So unless someone comes forward with a big wallet these seem destined to stay in the depot for another 28 years. 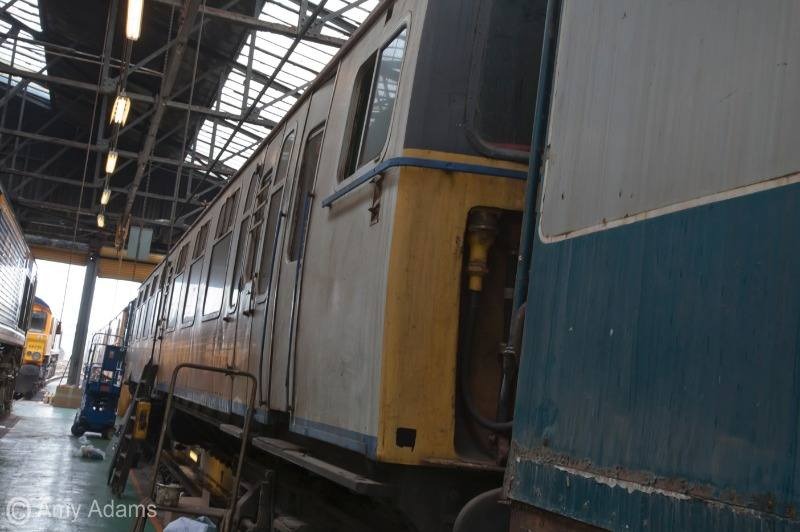 Some of the coaches from unit 1001 which are still to be restored.

These coaches are in an awful condition and require a lot of work to get them to a standard for passenger service, and a whole heap more work for the main line, so they wont be running anytime soon. Its fortunate that they are able to be kept undercover as many heritage groups dont have such a facility and have seen rolling stock which has been kept in the open deteriorate which results in scrapping. 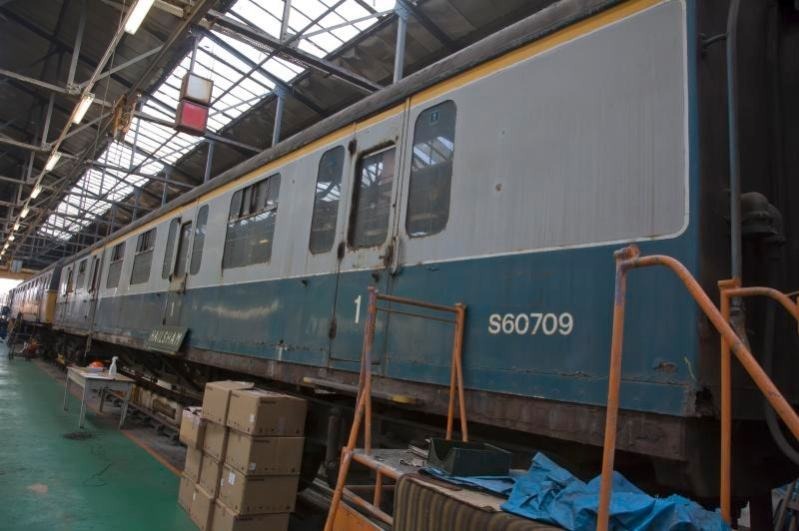 The famous railtrack Sandite unit
The Power Cars from Unit's 1127 (top) & 1131 (Below)
​These would normally run with either a Sandite vehicle from unit 1111 or a trailer from an EMU which was a De-Icing Unit.
When the unit was in service it was based at Ste Leonard's and all maintainance done by commercial arm of HDL
Since withdrawal they have been preserved here and still see some use which is taking equipment down to Southern's wash plant at the far east of the depot which is in an area with no road access ​ 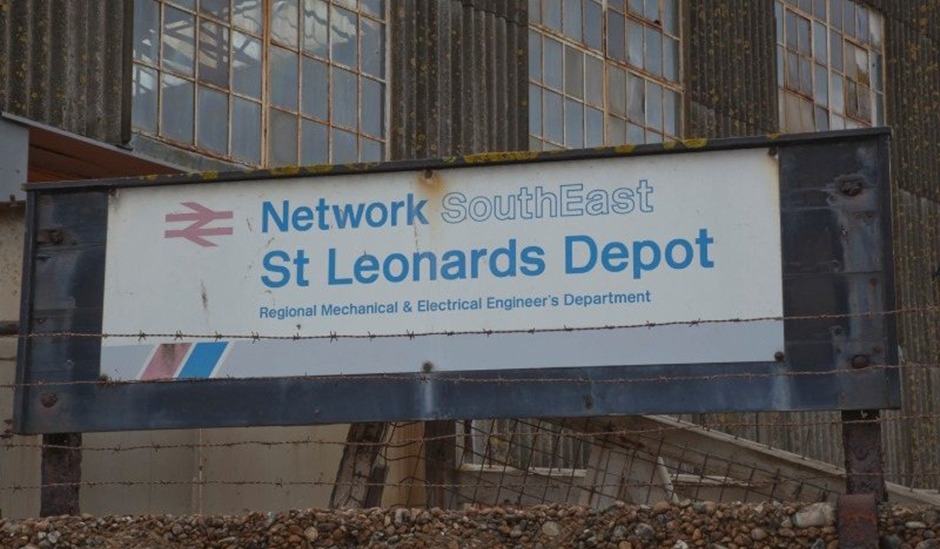 When the slam door stock was being taken out of service 76275 which originally came from a 4TC was saved by the group.

It was later formed into a CIG which explains how it lasted long enough to receive Connex colours.

It was purchased with the intention of using it for stock moves, but so far hasnt been used. I do apologise for the poor quality image but i was in a tight spot and was the best i could get. 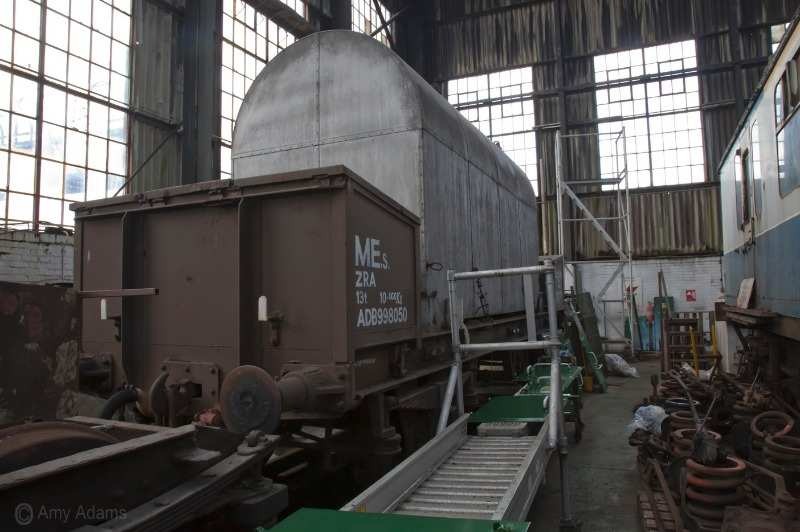 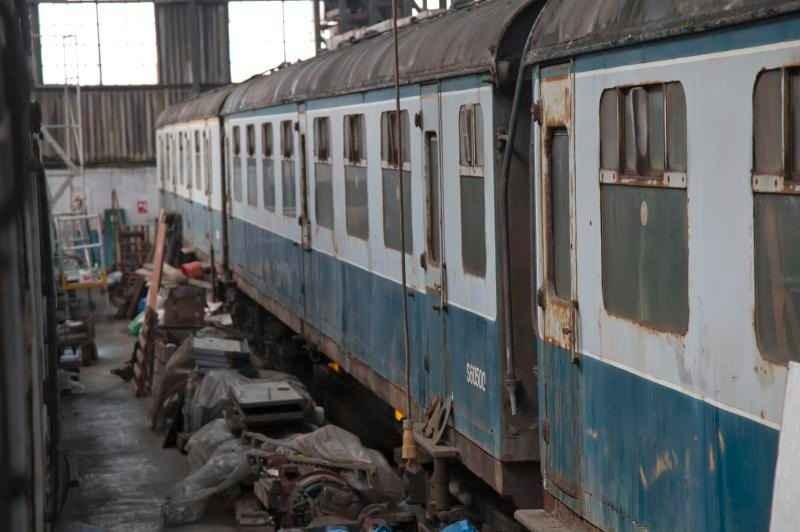 Another item of interest at St Leonard's is the depot shunter.

This is 07011 which is one of the fleet built to shunt Southampton Docks.

Its in full working order and can often be seen shunting items around the yard.

Another vehicle of DEMU interest is ADB 998050 which was built  specifically for the DEMU fleet.

It was built as an engine carrier as all the engines were overhauled at Eastleigh and it was used to bring the refurbished engines to St Leonard's and return the old ones back to Eastleigh.

The group has no intention of using it but saved it for its historic importance and its nice to see it tucked away in the corner of St Leonard's.

This gives a greater insight into the day to day operations and who runs what and so on, so please have a look

Back in October I was lucky enough to get an invite to visit St Leonard’s Depot near Hastings.

This depot was built for the now famous narrow bodied Hastings DEMU’s, and what’s not known by many is that it is still is the home for the surviving units.

The West Shed was the one used for maintenance of the units with the roof at the end built to a double height to allow for engine changes on the units. The shed itself consists of four roads with a small yard in front, but if any shunting has to be undertaken the only place for the stock to go is into the Southern shed so there is a great co-operation with the TOC.

As the yard is so small and due to the commercial side operating the depot is private and visitors can only be seen on an invite only basis and everyone including myself has to be escorted around.

The vehicles in the depot, which are owned by HDL, are amazing and its such a shame they cannot be seen by the general public.

It is well known they operate the main line unit, known these days by enthusiasts as “The Hastings Unit” which would imply there is only one of them surviving but if you believe this you would be wrong.

The group managed to save two complete units No’s 1001 & 1013 with the Power car and First Open from Unit 1012. The current main line unit is a hybrid of all three.

I will try to give a line up of what was there on the day of my visit.