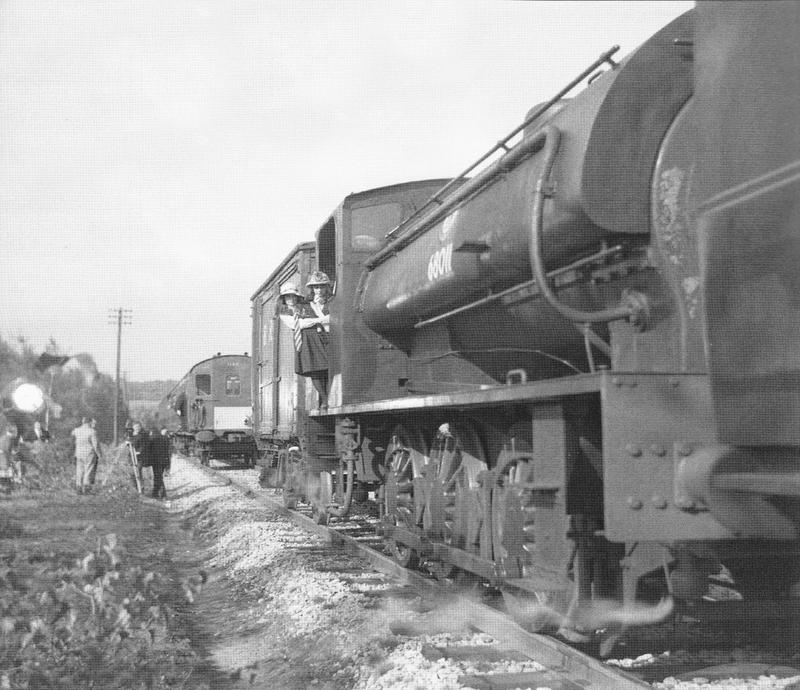 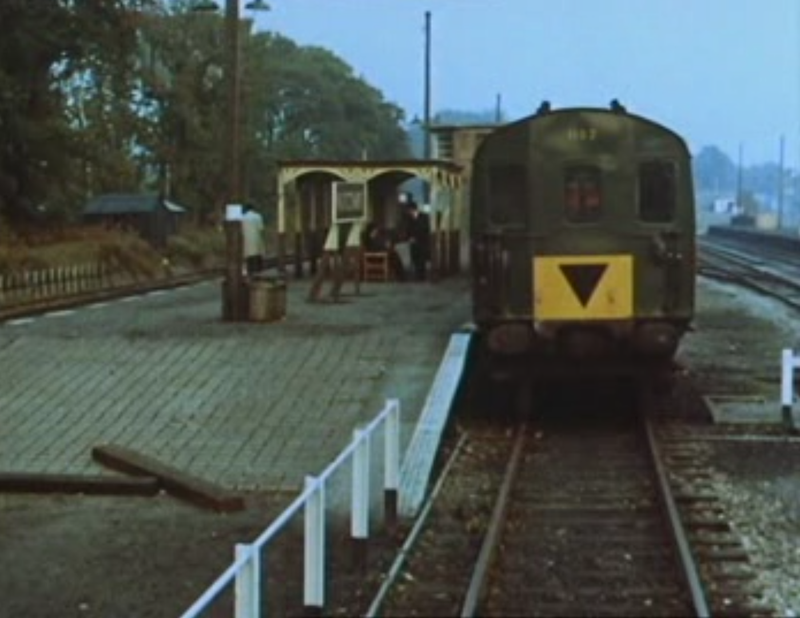 The Wickham Trolly being stolen by the teaching staff. This vehicle has since been preserved by the Rail Trolly Trust and is currently undergoing a frame up restoration at the Chasewater Railway. For the trusts Facebook page click here

After the Wickham entered the tunnel it was chased out by this Class 11 AD878 Basra.

This wasn't a BR painted locomotive, as the Army had purchased a small fleet of these direct from English Electric,

Sadly this engine was scrapped but another one of the Longmoor Class 11's AD601 survives on the Lakeside & Haverthwaite Railway in Cumbria.

For more about the film and railway please follow these links

The Wikipedia page for this film 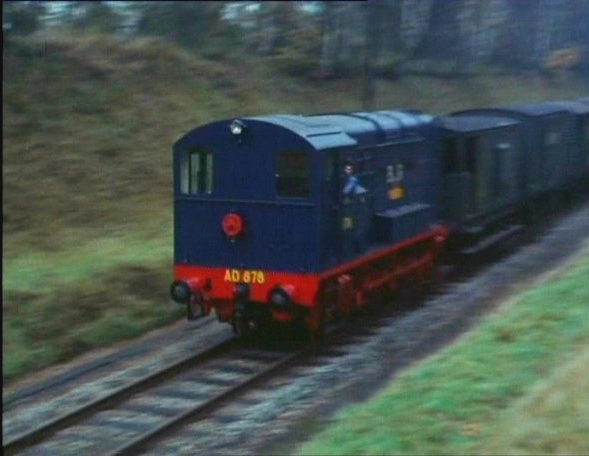 There hasn't been many films or TV programmes over the years where  "Thumpers" have been used but one exception to the rule is the " Great St Trinians Train Robbery".

Filmed in 1966 on the Longmoor Military Railway, near Liss in Hampshire, most railway enthusiasts know the film for its use of the 0-6-0ST Austerities, which were used in the escape at the end of the film; but other trains were also featured.

In the opening scenes there was a WD 2-10-0 No 601 "Kitchener", which was painted a mock British Railways green.

There was also a sequence where the Headmistress and the other teachers stole Wickham Trolly No 9033 and ended up racing into a tunne,l only to be chased out by and English Electric shunter (similar to a BR Class 11) No 878 Basra.

But for me it gets interesting when the police turn up and commandeer a train, which just  happens to be DEMU 1102

1102 ready for the off, just before the police turned up to requisition the train.

Seen towards the end of the film, the unit arrives at the final station where the police jump off as soon as they are on the platform.

Many of the shots in the film were just a few seconds and here are a few which shows 1102 shooting past.

It had been given a fake BR identity and plywood tanks to make it look more like an LNER J50.

​This locomotive was WD157 Constantine

68011 was the other Austerity. This one was stolen by the girls and the van attached to the back is the loot.

68011 was better known as WD196 Errol Lonsdale, when it was based on the South Devon Railway it was repainted into this guise and carried the number 68011 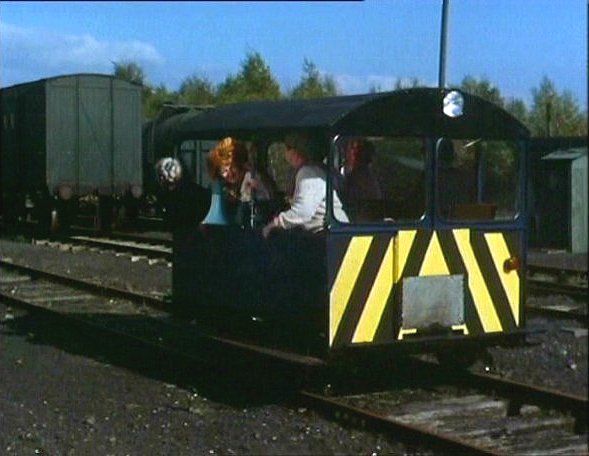 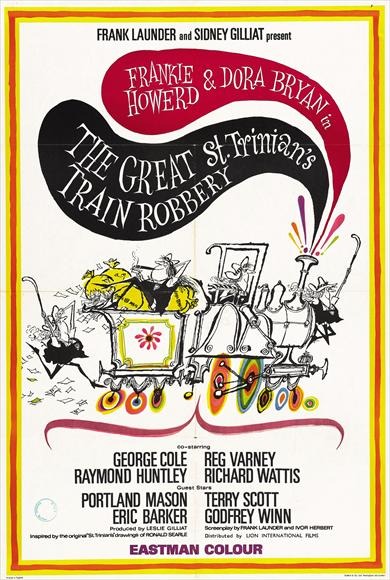 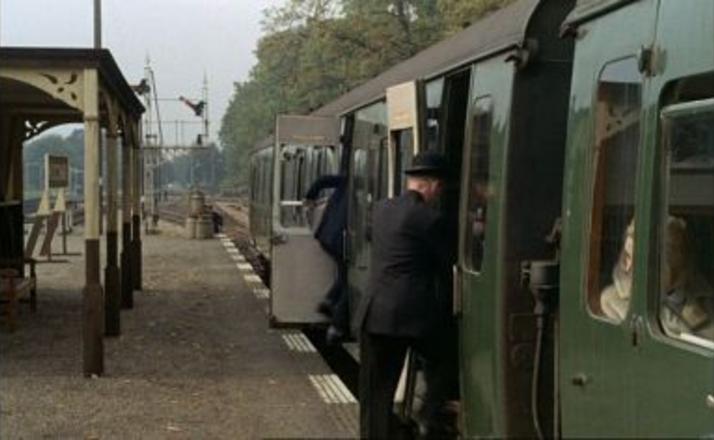 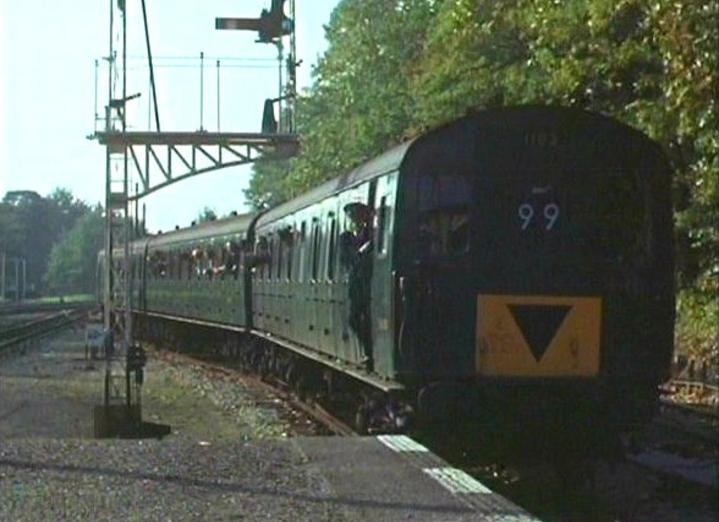 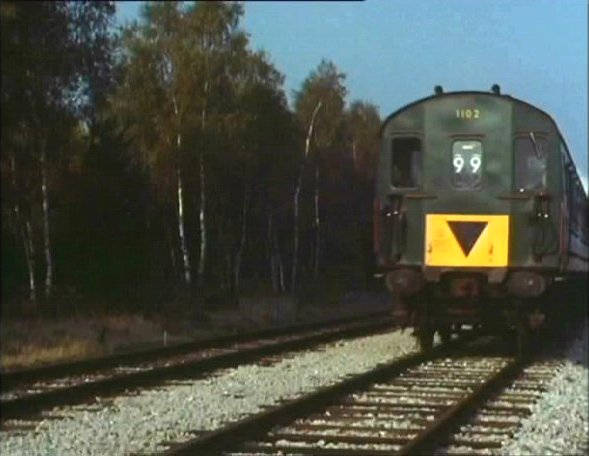 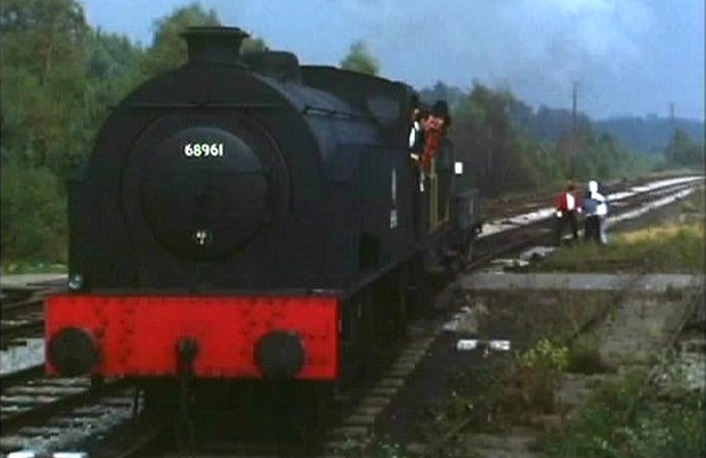 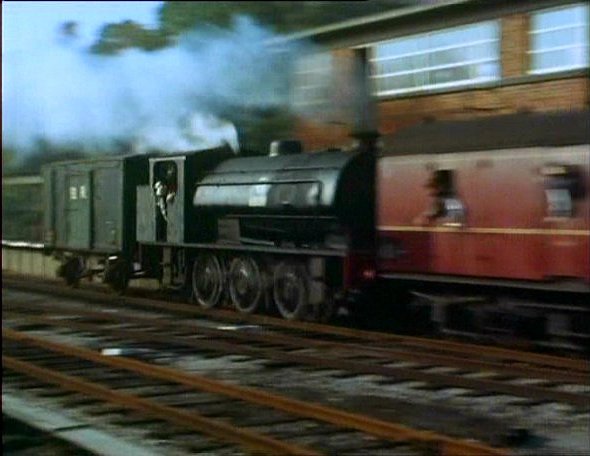 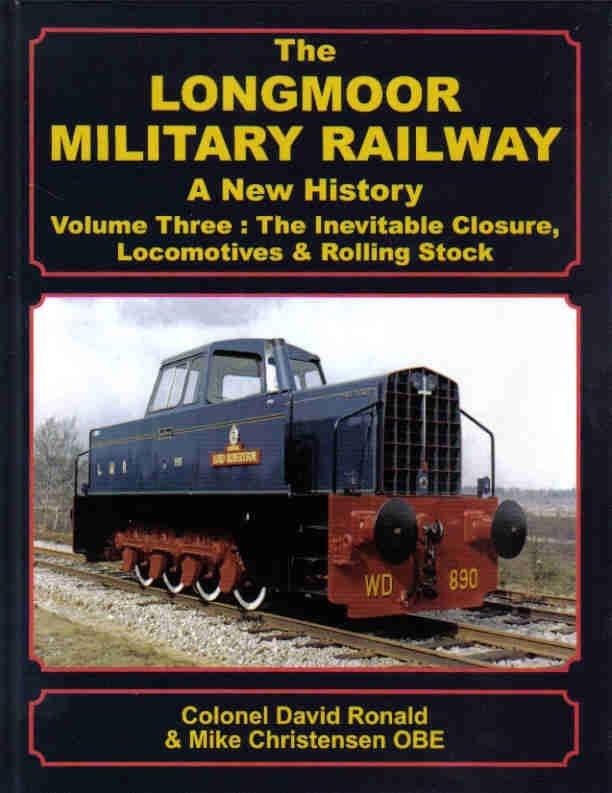 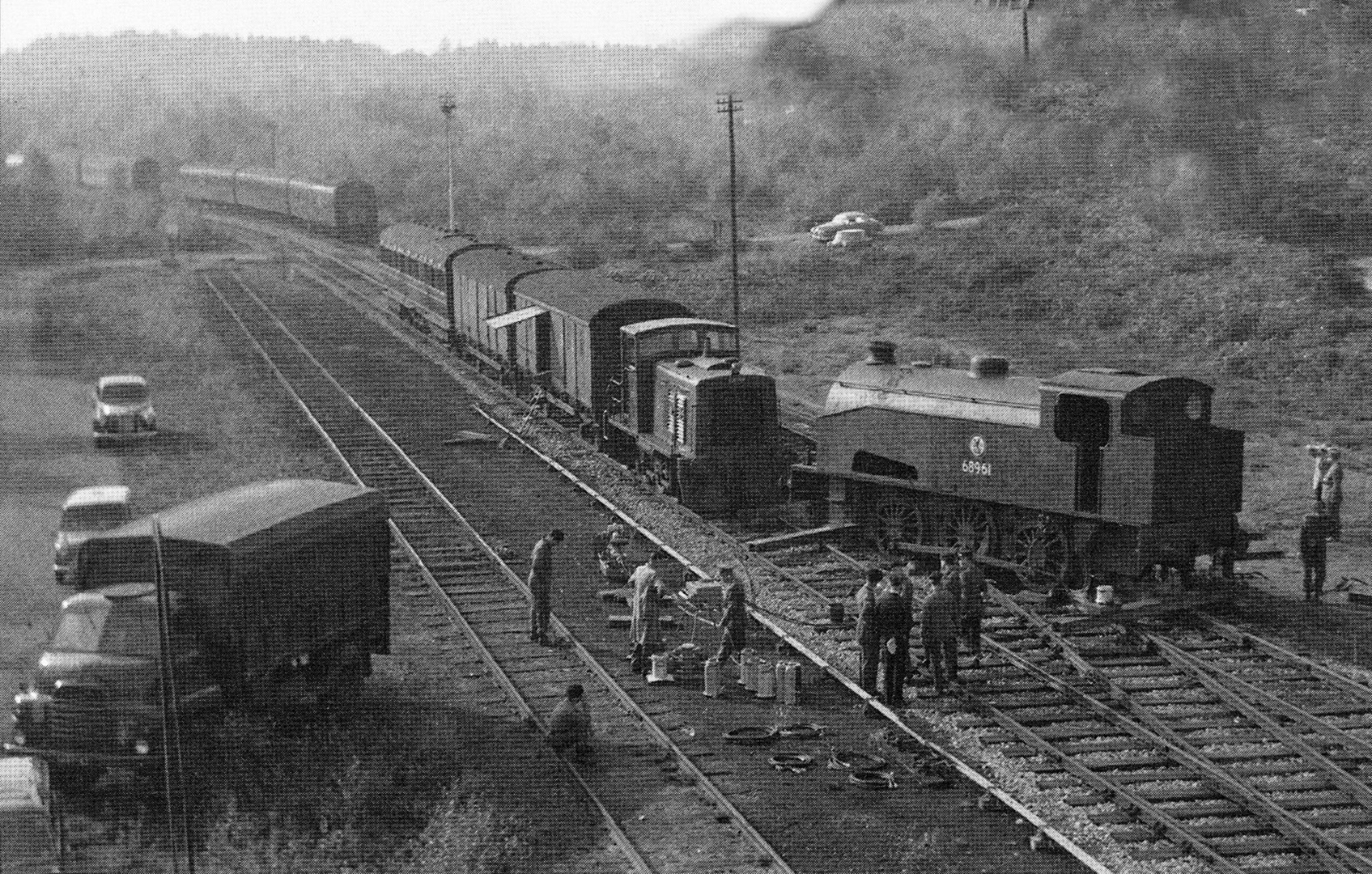 With all the complex manoeuvres needed in the the film there is no wonder there was a derailment. 68961 is off the rails and the recovery train hauled by a Ruston is on the scene, 1102 can be seen in the background

(inset) With the presence of unusual motive power the LMR men took no hesitation in getting to grips with new traction.

The large engine at the beginning of the film which was hauling the Mail Train was WD2-10-0 Kitchener, sadly this was the best shot of Kitchener we saw in the film 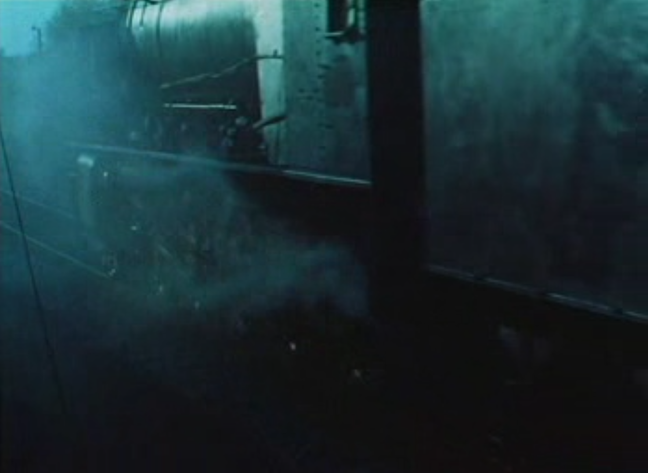 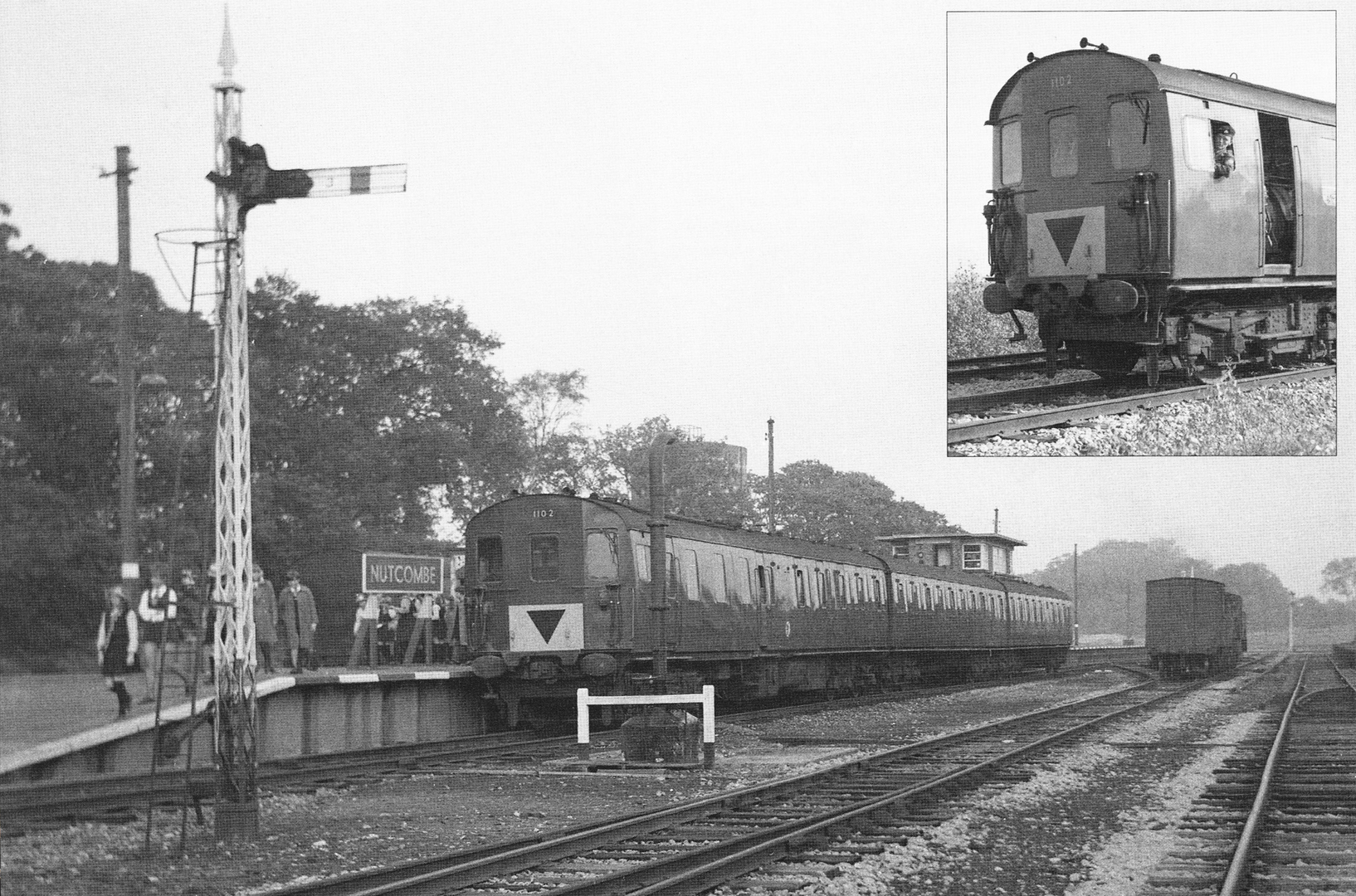 A recent book called 'The Longmoor Military Railway, A new history- Volume Three' by Colonel David Ronald and Mike Christensen OBE and published by Lightmoor Press, there is a section about films made at Longmoor and in this chapter there is a few pages dedicated to the St Trinians film. here are a few scans from the book 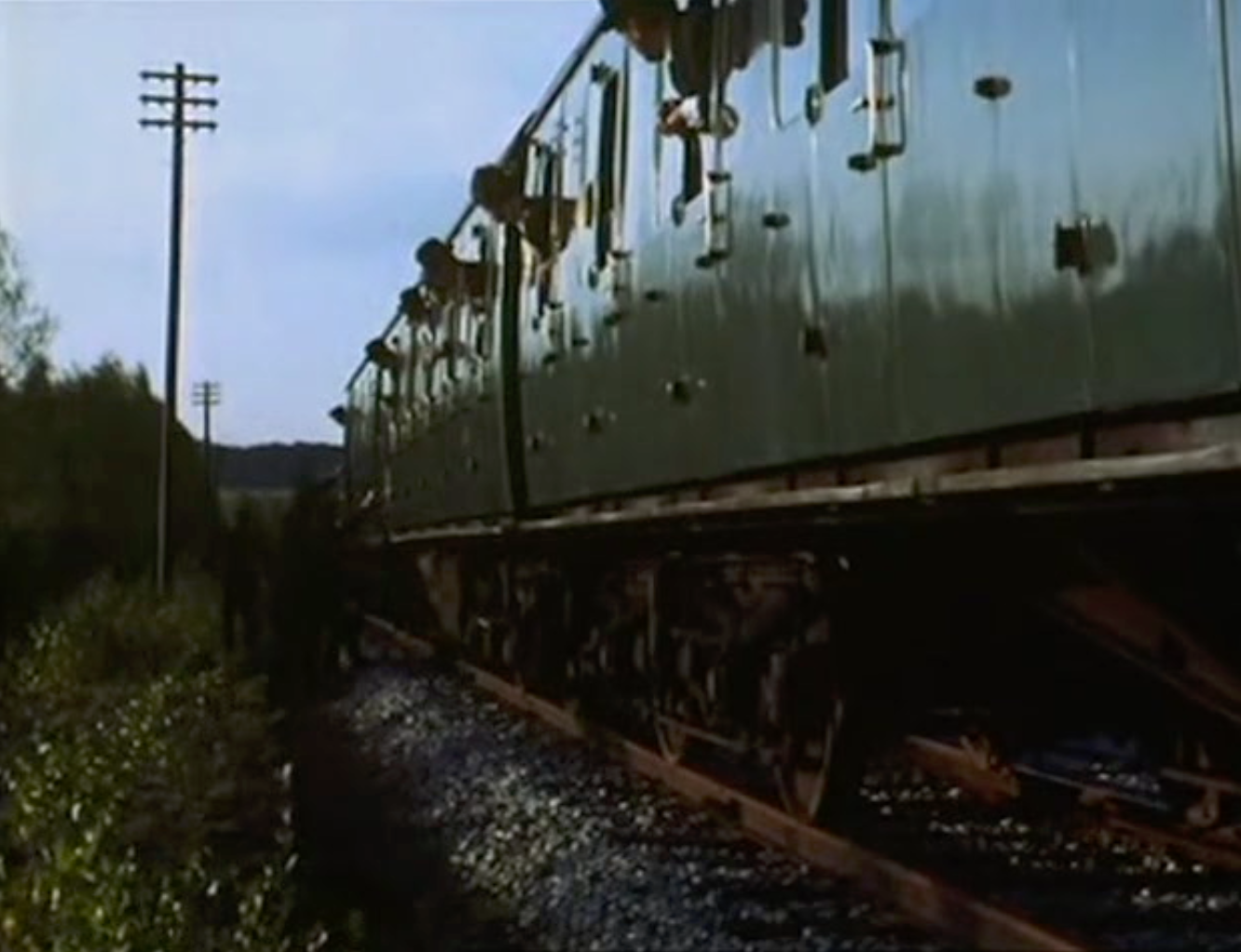 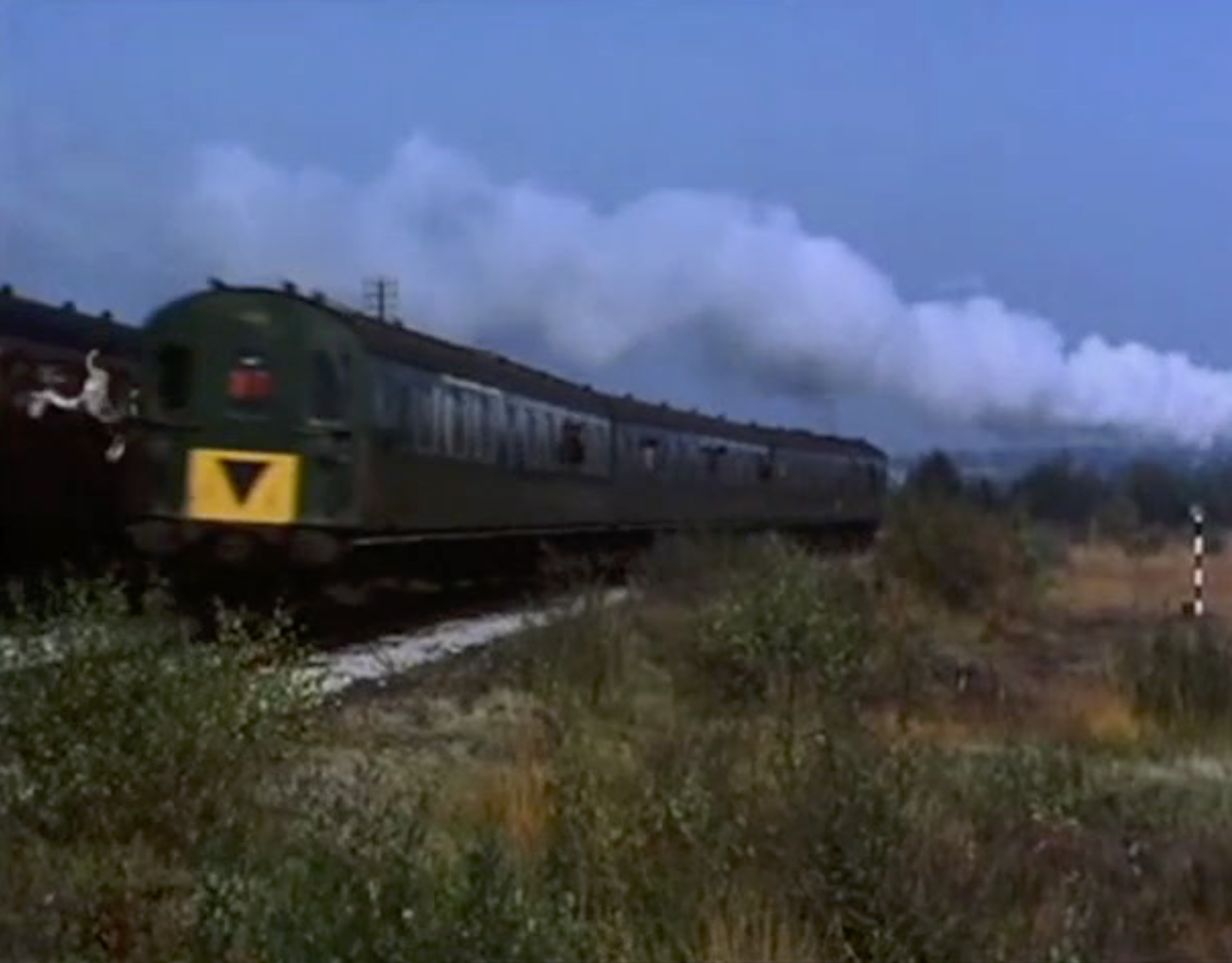 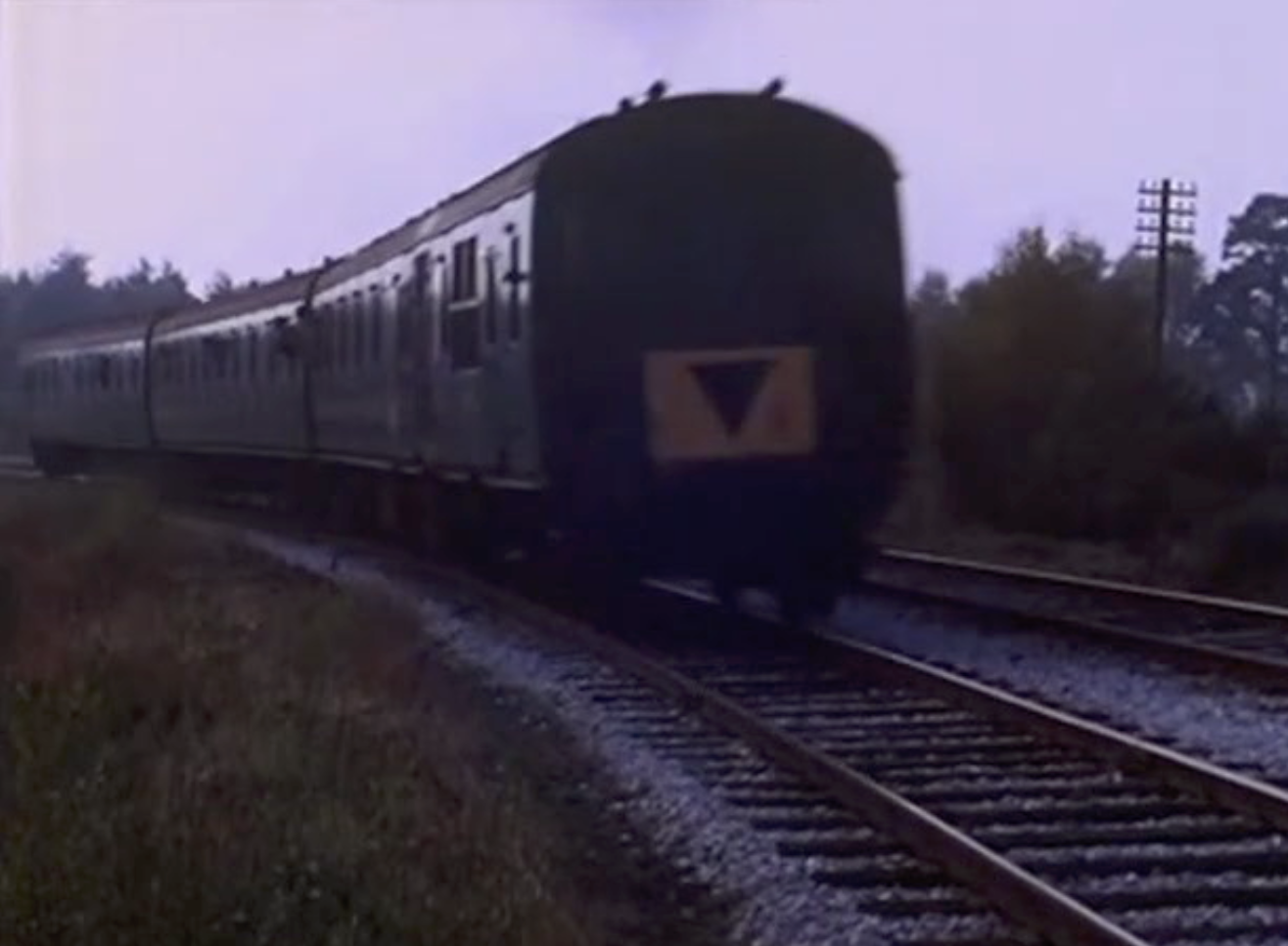 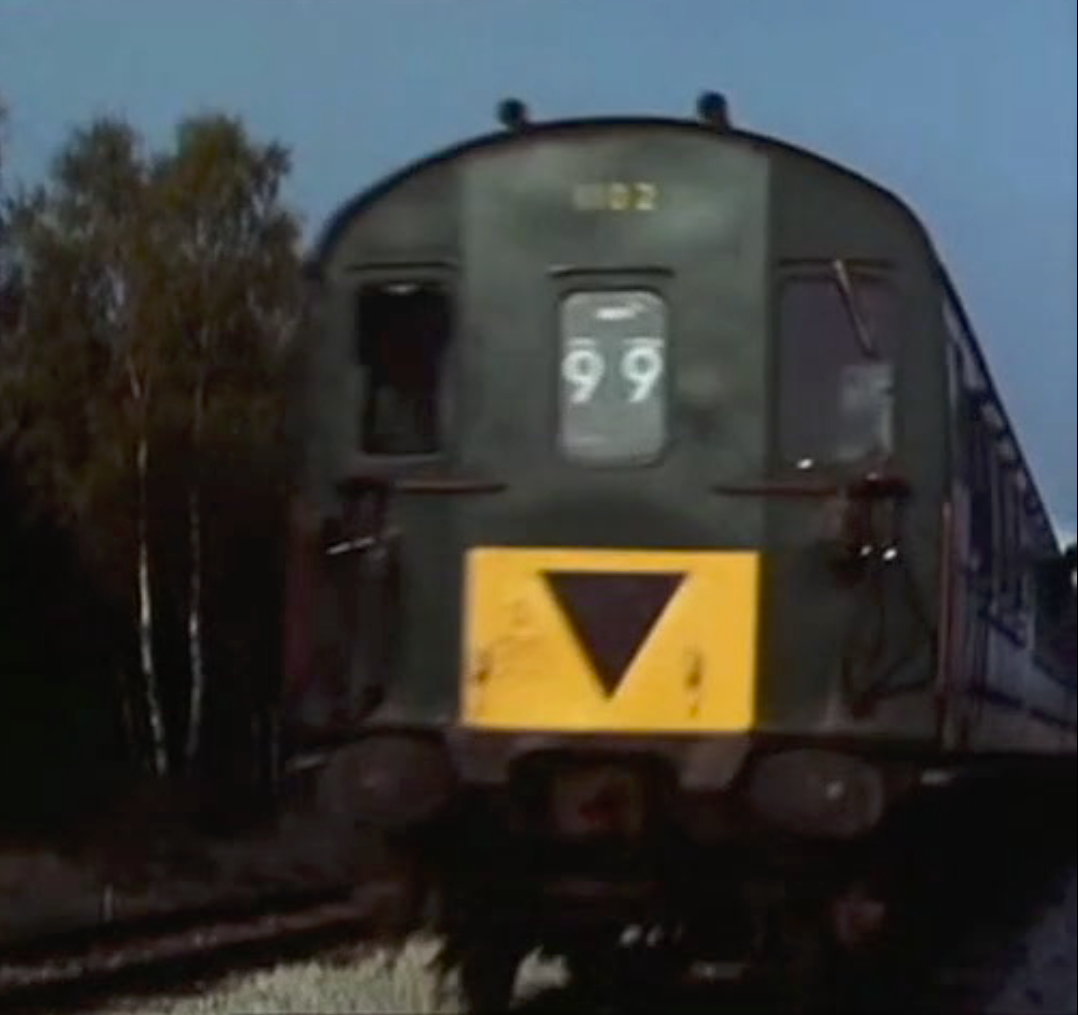 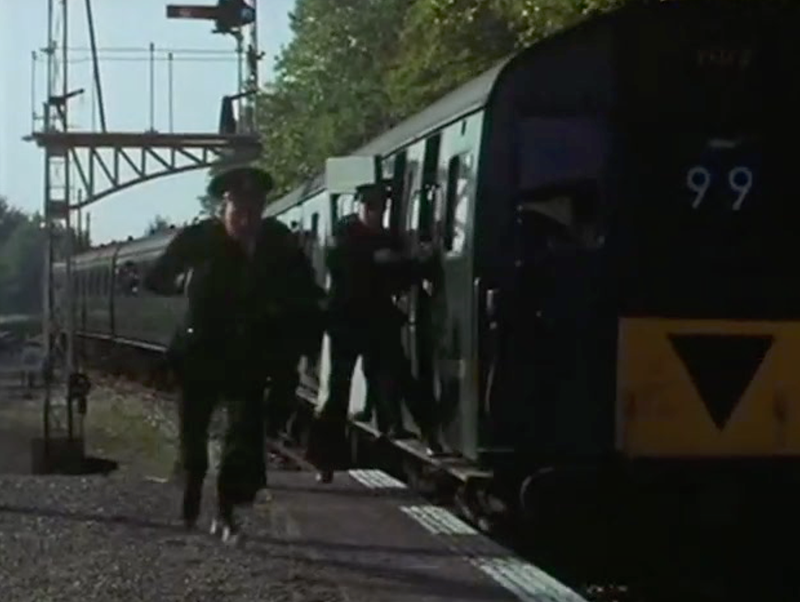