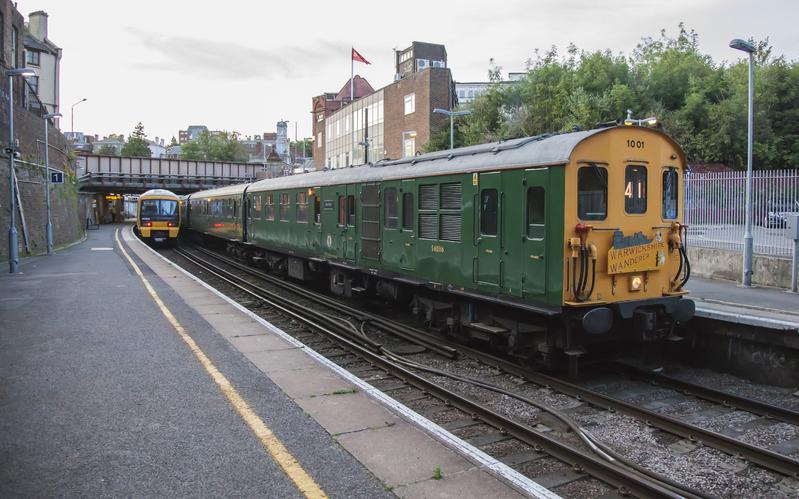 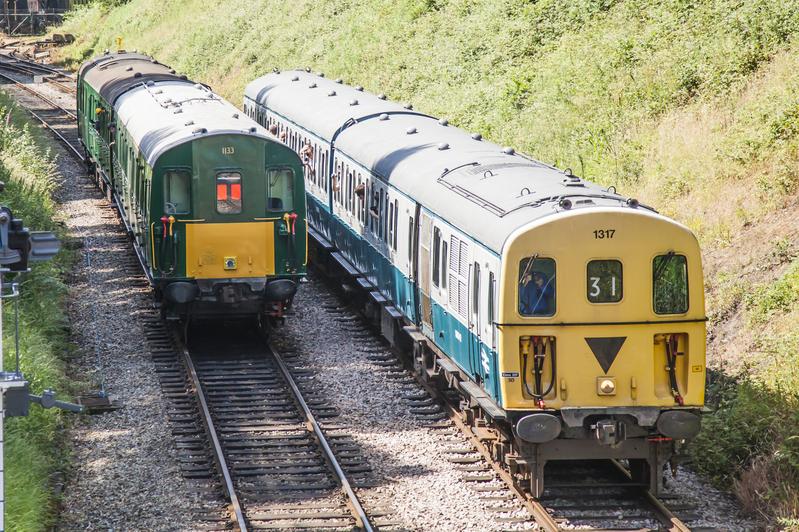 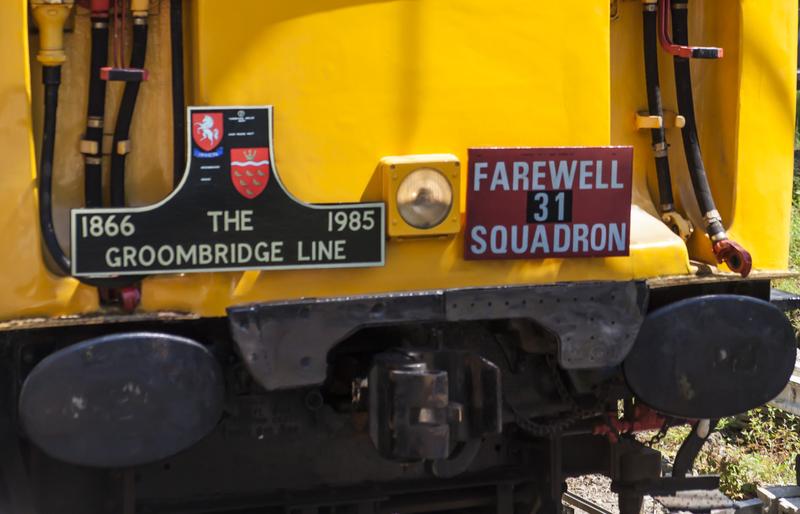 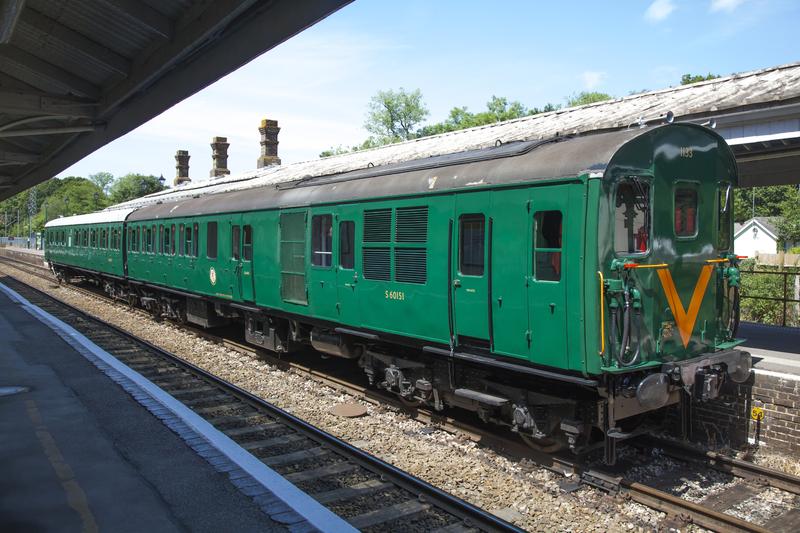 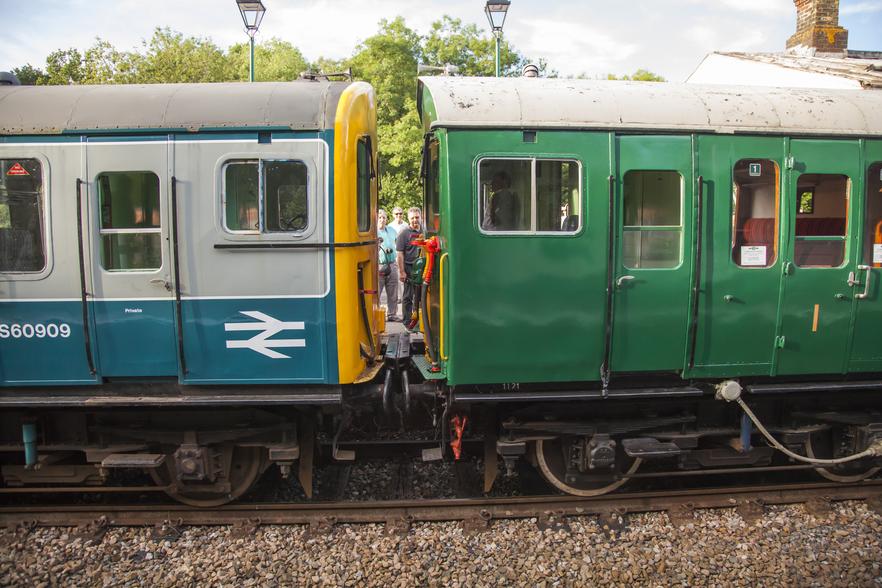 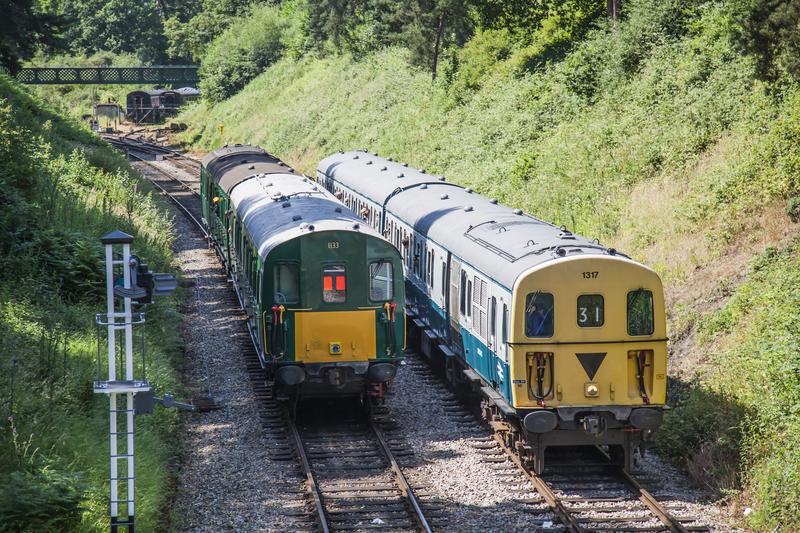 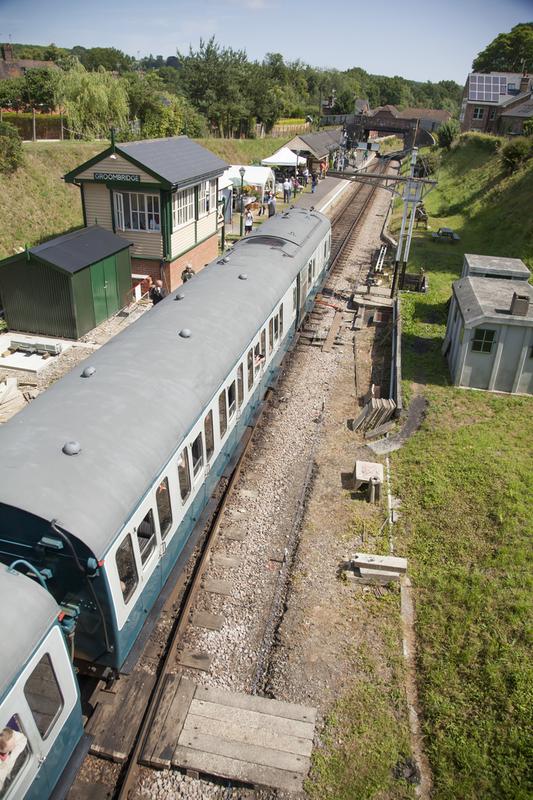 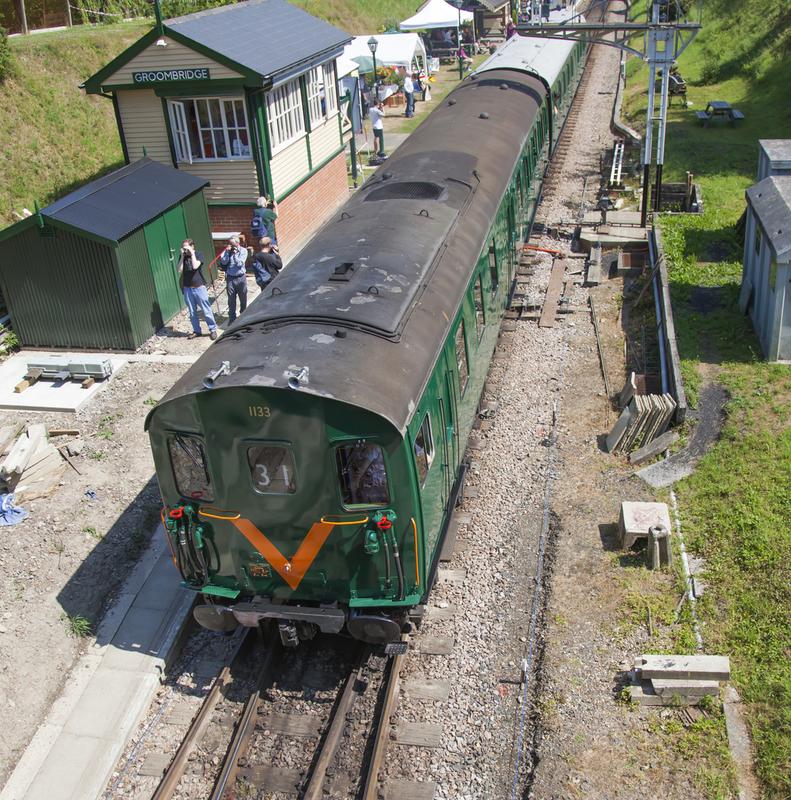 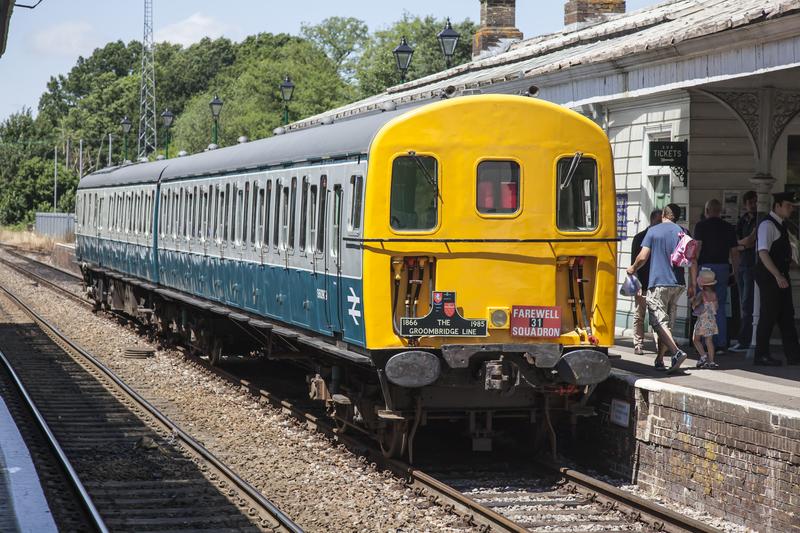 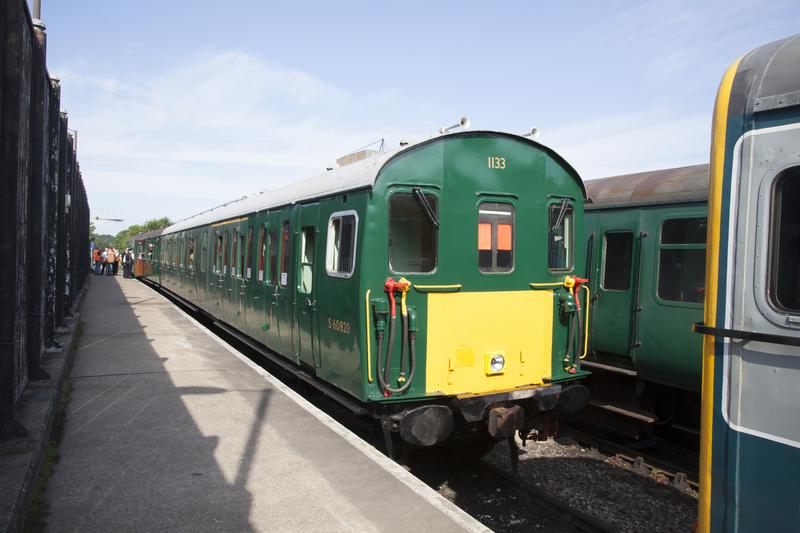 Also on the 4th July Hastings Diesels ran the Warwickshire Wanderer tour so it was only a few minutes from the Spa Valley to get this shot of the unit coming through Tunbridge Wells, giving the rare chance to see 3 units in one day.

We want to thank all the guys from the Spa Valley Railway and the Lavender Line for getting together and giving us one of the best ever events in Multiple Unit history, any other Thumper events will have to go a long way to beat this

We also have a video of the day on You Tube 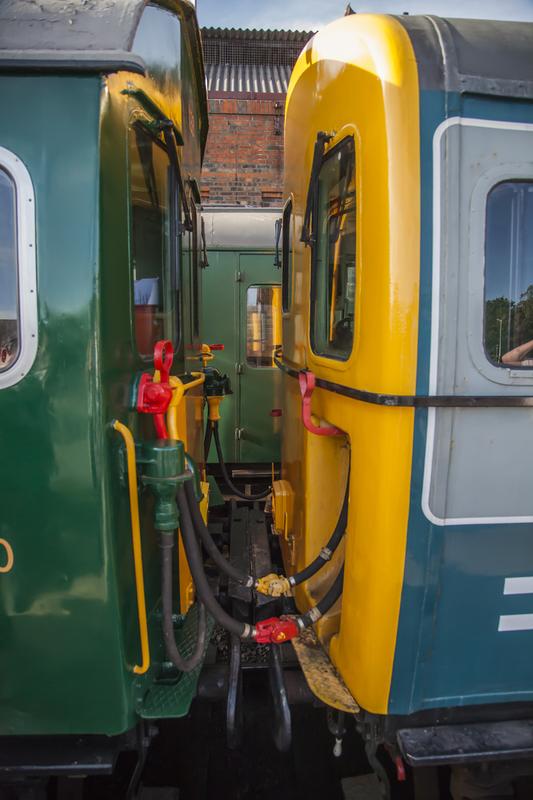 1317 is also seen at Eridge , during the day it carried the headboards it carried on that final day 30 years earlier.

31 Squadron was a nickname for the line as the Headcode used was 31. 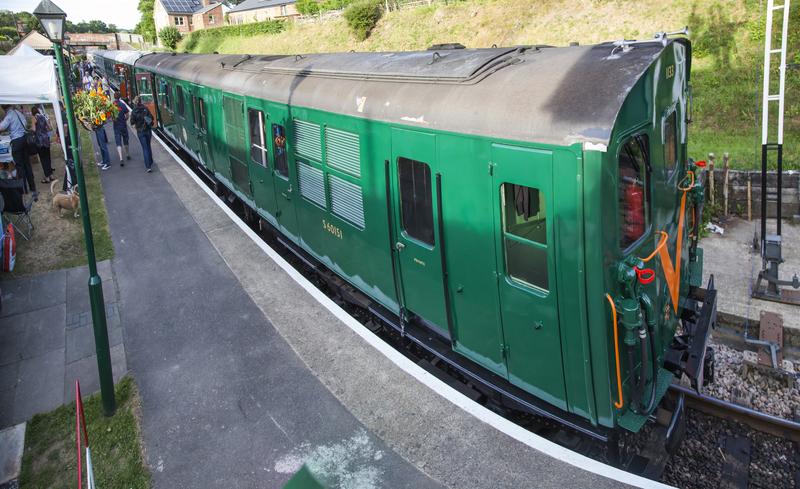 The middle of station on the line is Groombridge.

The original station was a little way further back but developers moved in before the SVR could get hold of it but enough space was left to run a track through and a new station was built to the West of the original.

As well as there being a footbridge just beyond the new station there is also a passing loop giving the view of 2 Thumpers passing a scene which hasnt been seen for over 10 years. 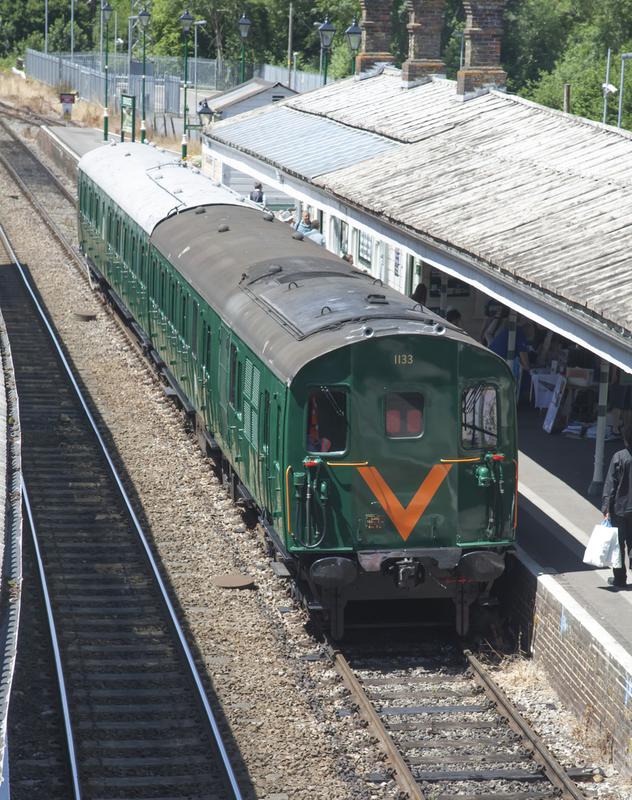 Just outside Eridge the 2 units were split again and they ran into separate  platforms, the positioning was a bit too tight to get a shot of both unit but this one was taken from many shots then merged together in photoshop giving a fantastic wide angle shot 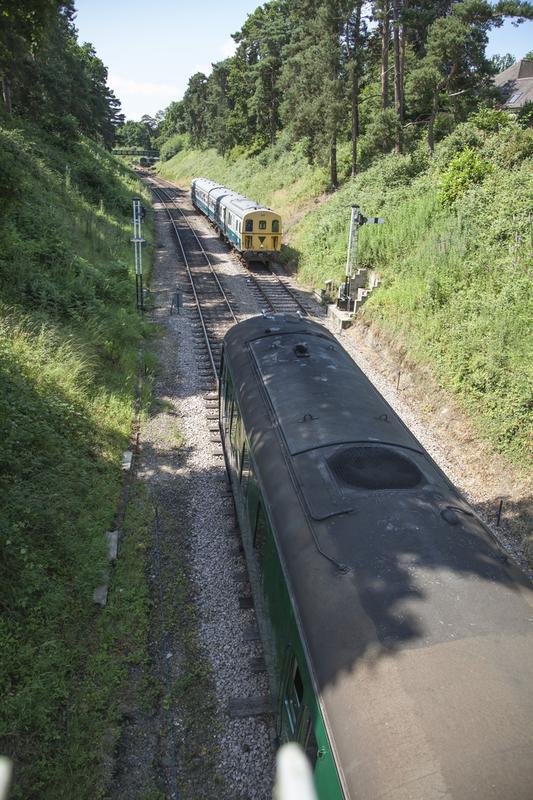 The First train of the day was 1133, it is seen here at Tunbridge Wells West with 1317 getting into the shot 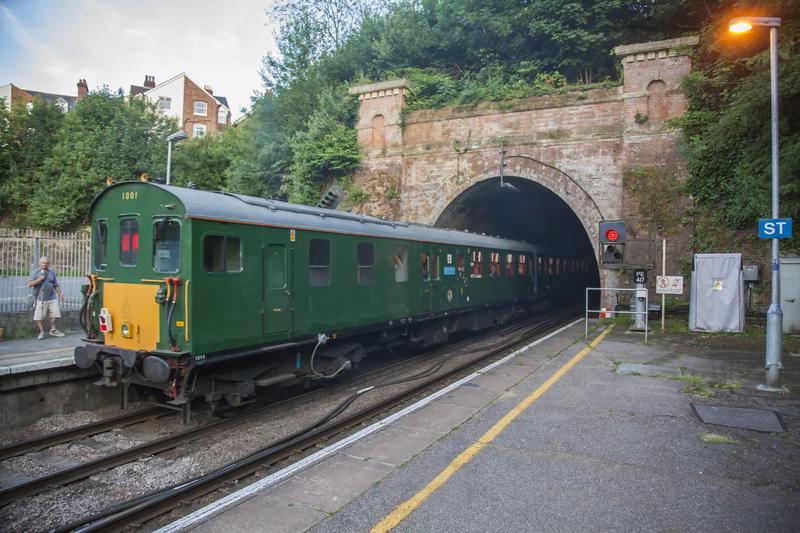 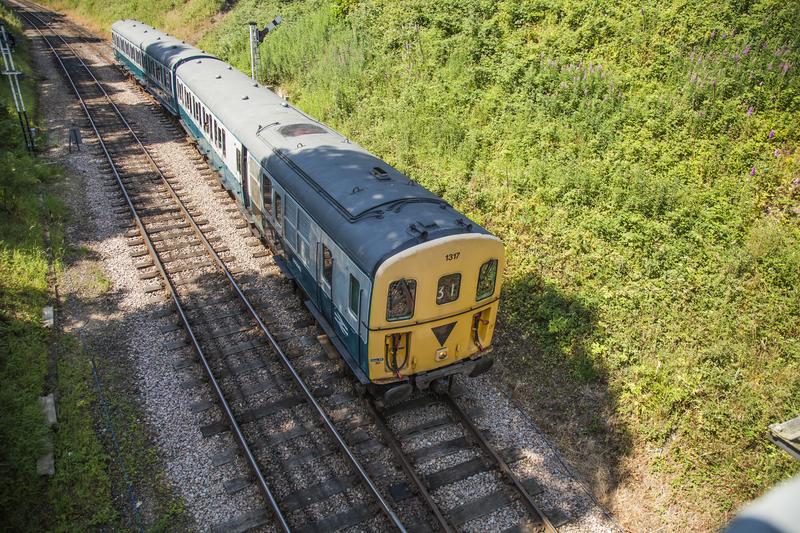 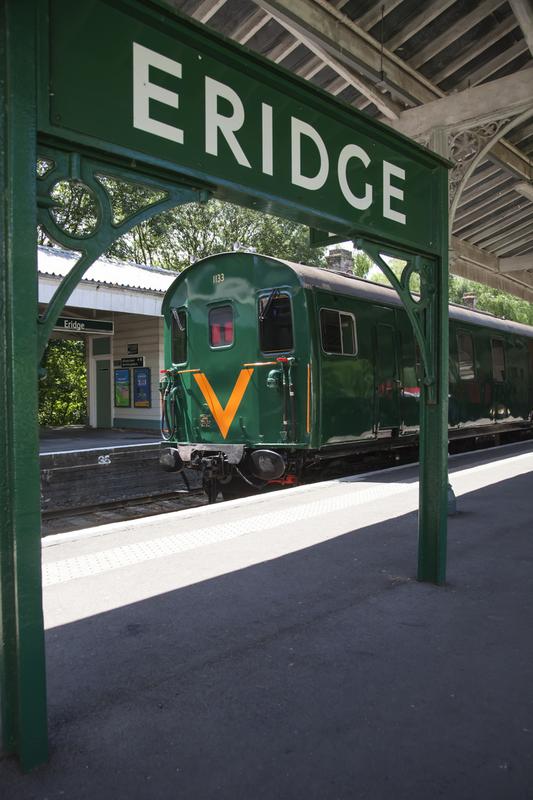 For the last few trips of the day the 2 units were coupled together, this was what everyone wanted to see, Two Units running together again.

The Western terminus of the line is Eridge where the Spa Valley use one side of the station whilst the other side is still a Network Rail station, all the station buildings are still complete giving a real timewarp feel which has to be one of the best places to see a superbly restored Thumper.

Ever since the Thumpers ran their last public trip on the 'Last Thump' tour in 2004 no Thumpers have run together in preservation.

The main problem about getting two units together is cost, you need 2 lorries to transport and then the capacity is about thats of 1 1/2 coaches so not very cost effective.

We first heard about it in March when we were asked by the Spa Valley about putting an appeal on the website, which we done and also pushed it in the facebook group, many other groups also promoted the appeal and thanks to many of the members the £6k was reached enabling the transport to be cost effective.

The Double Thump was the 30th  anniversary  since British Rail closed the Spa Valley line.

On that day the last train consisted of 2 thumpers one of them being the lines own unit 1317.

For the celebrations the second unit the the superbly restored 1133 from the Lavender Line which must have the finest paint job on any preserved vehicle, which is finished to such a high standard it wouldn't look out of place in the National Railway Museum.

The weekend was planned with just purely Thumpers on the Saturday and a mix of Steam and Thumper on the Sunday, so all naturally I visited on the Saturday the Pure Thumper day