I think its fair to say that Dormansland leads a fairly quiet existence. Its station "Dormans" is quite unremarkable, being the last stop before East Grinstead on the line from Oxted. However, all that was to change on Friday 27th March 1987 when DEMU 205002, on the line near the station, became the front page headlines in Eddie Shahs newspaper "Today". A big thankyou to Jonathan Ryder for keeping a copy of the paper and scanning it for us to use. Thankyou Jonathan.

As the text in the newspaper may not be clear on some devices, i have transcribed the newspaper report. I have tried to enhance the photos but coming from a newspaper, they were never going to be good.

This is the same unit that featured in the St Trinians' film for which Amy has completed an article.

Three people were seriously hurt when a falling tree speared a London bound train approaching Dormansland station near Lingfield in Surrey. Commuter Reginald Stear, 41, of Crawley Down was pinned under tangled wreckage for 3 hours. After emergency treatment at the trackside, he was taken to hospital in East Grinstead, Sussex with facial injuries.

Another passenger John Higgins, 42, of East Grinstead, who was catapulted from the train, later underwent emergency surgery at Redhill. Fellow  passenger Roger Harrington, 40, from East Grinstead, told how the tree ripped through his carriage. He said "The driver appeared to brake very sharply and then there was a juddering as though the train had run over something. Directly opposite me this huge tree crashed through the side, taking the window and seats with it. It completely tore apart the inside of the carriage, leaving it littered with shattered glass and bits of seats."

A report from the East Grinstead Courier

TWO people were seriously injured and another four were taken to hospital when a train crashed into a fallen tree.

The freak accident near Dormans station occurred during gale force winds which wreaked havoc throughout the area on Friday, March 27, 1987.

One man was catapulted out of the East Grinstead to Victoria train when the beech crashed into the side of the front coach, trapping another passenger under the mangled wreckage for two hours.

The 8.48am train was running about 12 minutes late when driver David McConnell rounded a bend to find the tree blocking the line.

He applied the emergency brake but the front carriage collided with the tree, which spun round and speared through the side of the train.

Firefighters had to use every piece of equipment available to free Reginald Steer, who spoke about his horrific ordeal after he was treated in hospital.

The 41-year-old, of Haven Gardens, Crawley Down, said: "All hell broke loose and it seemed as though the world had exploded.

"I blacked out and then came to with the tree across my legs, and I was able to give the emergency services my name and address."

Mr Steer required nearly 40 stitches for his wounds, which stretched the length and width of his face.

His wife Tina said she first knew of the incident when she heard it on the television news.

The man thrown out of the carriage was John Higgins, 42, of Halsford Park Road, East Grinstead. He suffered severe head injuries after being forced out of the train, across the other tracks and into the far embankment.

Witnesses attempted to attract the attention of the driver of a train just leaving Dormans station shortly after the incident and he was able to pull up in time.

The emergency services were on the scene for several hours but the line was reopened at 4.20pm that day.

The high winds caused further damage in the area that day, with East Grinstead firefighters being called out to more than a dozen weather-related incidents.

Shop hoardings, aerials and roof tiles were torn from town buildings and many cars were damaged by falling debris. 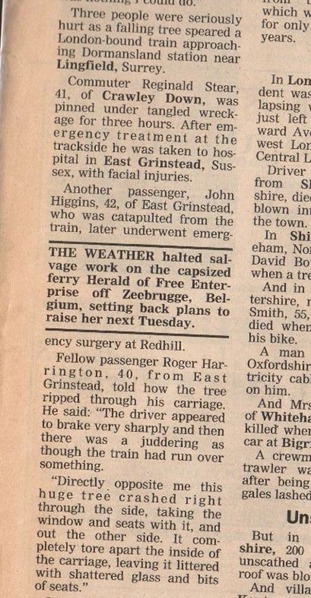