Looking through the BBC News Pages in 2007 they done an article about it as it was 40 years to the day the disaster happened, we have copied their report below

​
1967: Forty die in Hither Green rail crash
At least 40 rail passengers have died and 80 more have been wounded after a commuter train derailed in south-east London.

The 19:43 express train was travelling from Hastings to Charing Cross when at 21:16 it crashed off the rails between Hither Green and Grove Park stations near the Southern Region Continental goods depot.

It happened just over a mile from the scene of the Lewisham train crash in 1957 in which 90 people were killed and 175 were injured.

Only the first two of the train's 12 coaches remained on the rails. One overturned completely and the next two jack-knifed onto their sides.

Tonight, rescuers working under floodlights are trying to free those still trapped in them. Driving rain and the position of some of the overturned coaches has made the rescue operation especially difficult.

Firemen are using special equipment to cut through many coaches to release passengers.

Hospital medical teams and ambulances are at the crash site and doctors have had to crawl through twisted wreckage to treat survivors and give them painkilling injections.

Most of the survivors were taken to Lewisham hospital, praised for its work after the Lewisham train disaster ten years ago.

The driver and guard escaped unharmed but remain in a state of shock.

Eyewitnesses have been describing the accident to journalists.

Shirley Ward, a 21-year-old secretary from Broadstairs in Kent who emerged unharmed from the wreckage, told the Times newspaper: "The lights went out before we turned over. We felt ourselves travelling along on the carriage's side. Everyone was clutching on to one another. There were some terrible screams."

Another survivor, 19-year-old medical student Ray Moore from Hastings, said: "Stones came chipping up from the track as we went along this stretch which is usually a pretty fast one.

"Then it rocked and swayed and went over on its side. At least three people in my compartment were killed."

A spokesman for the British Railways Board said it was not know what caused the derailment. He said: "It is wide open what could have happened. [The train] could have crossed points or hit an obstruction." 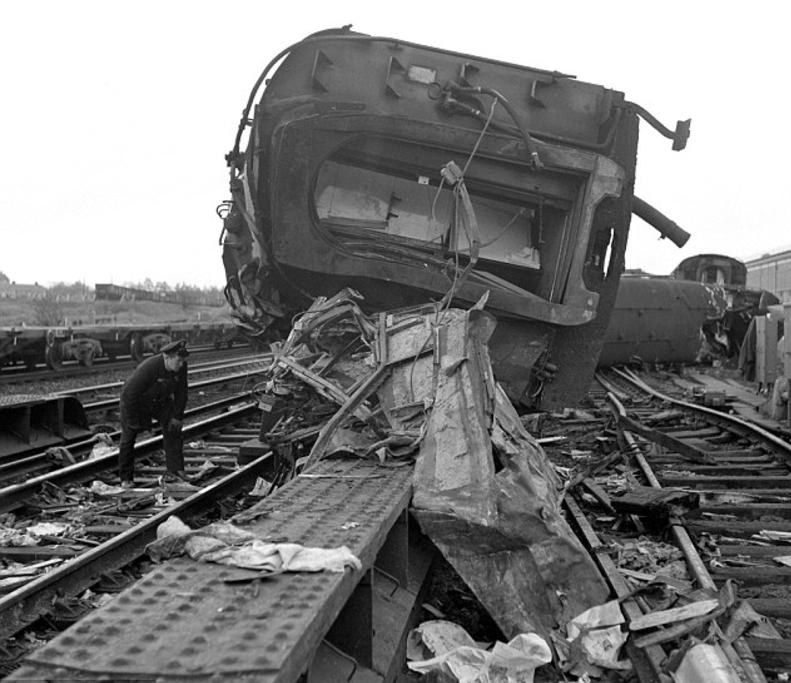 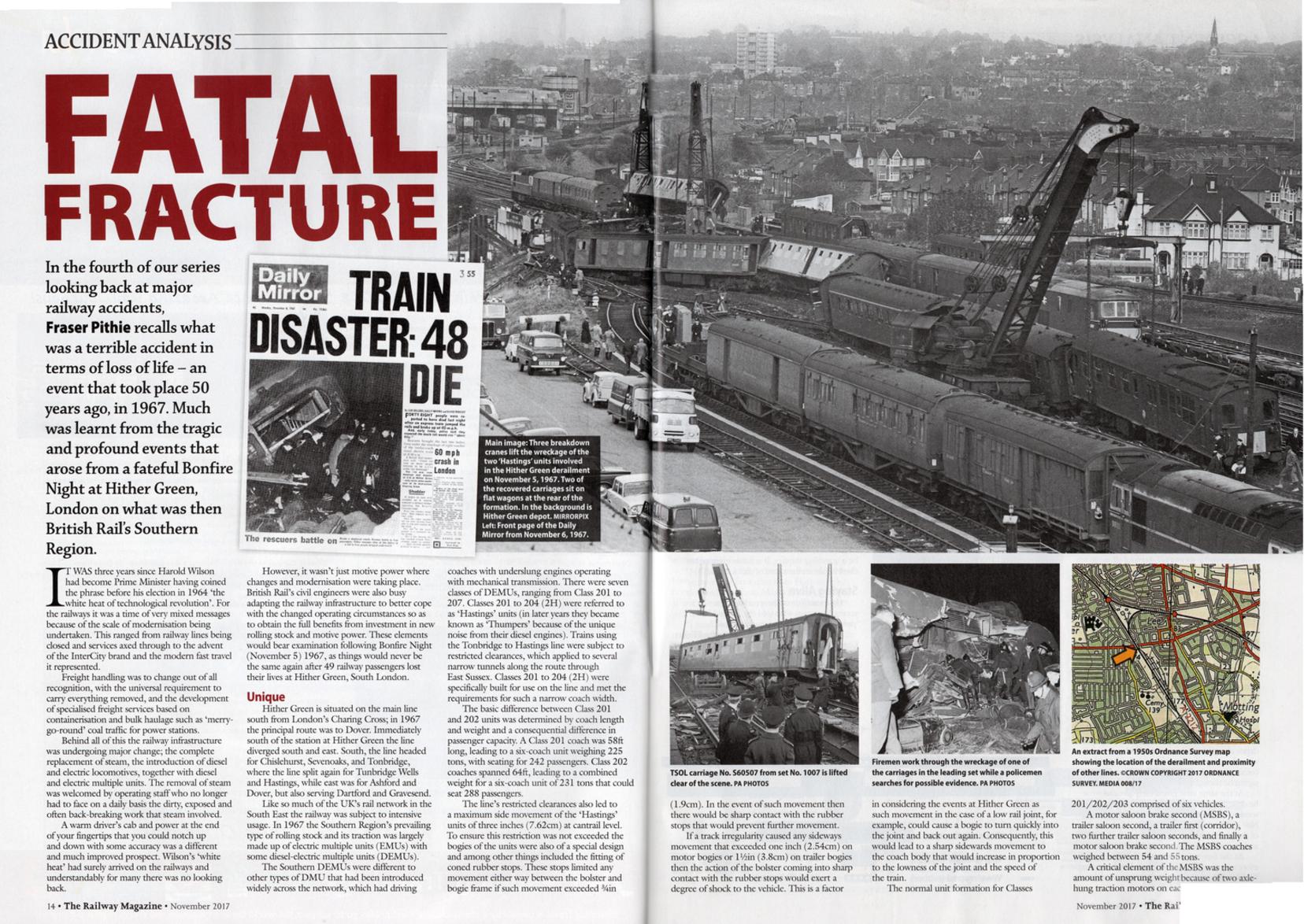 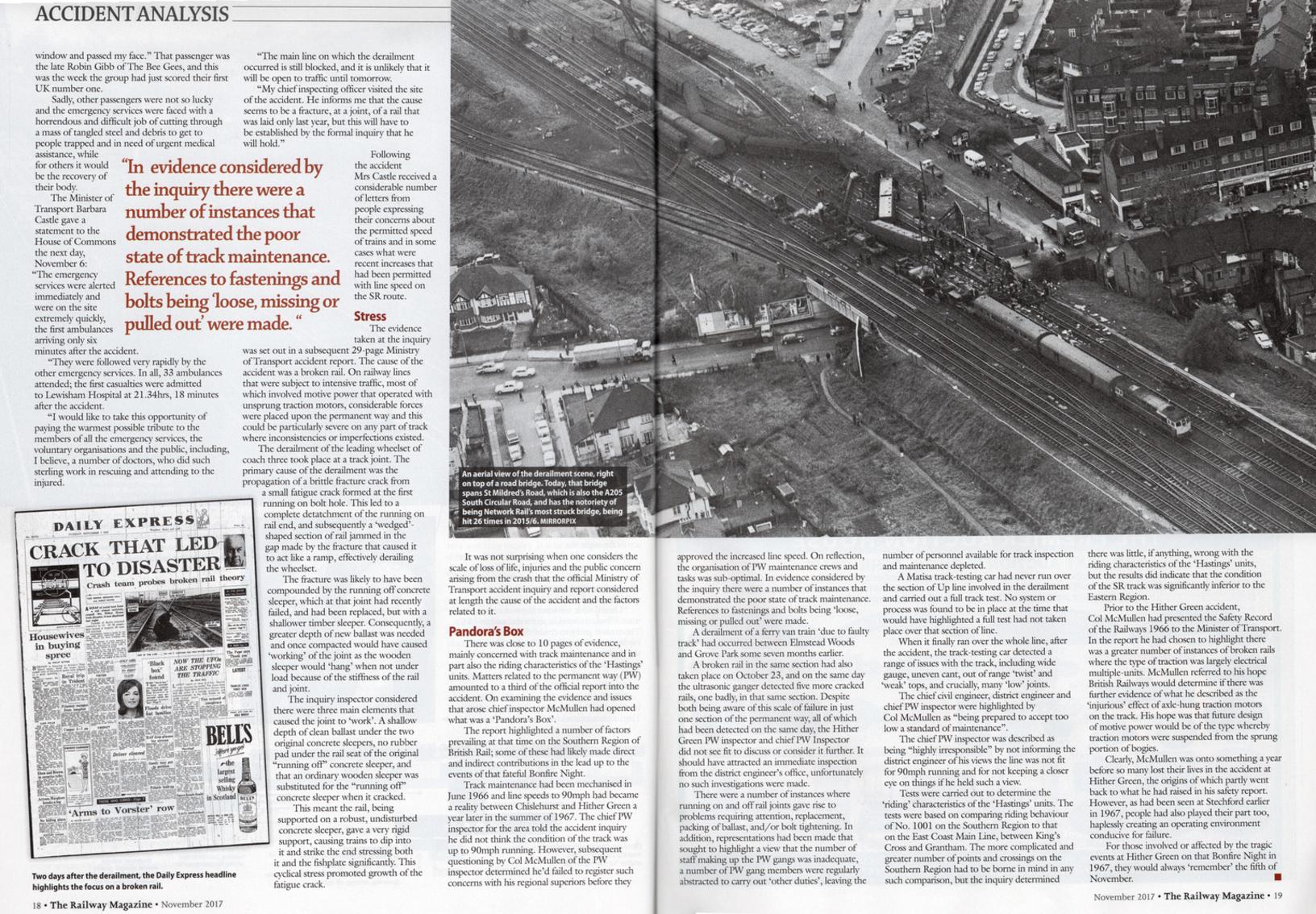 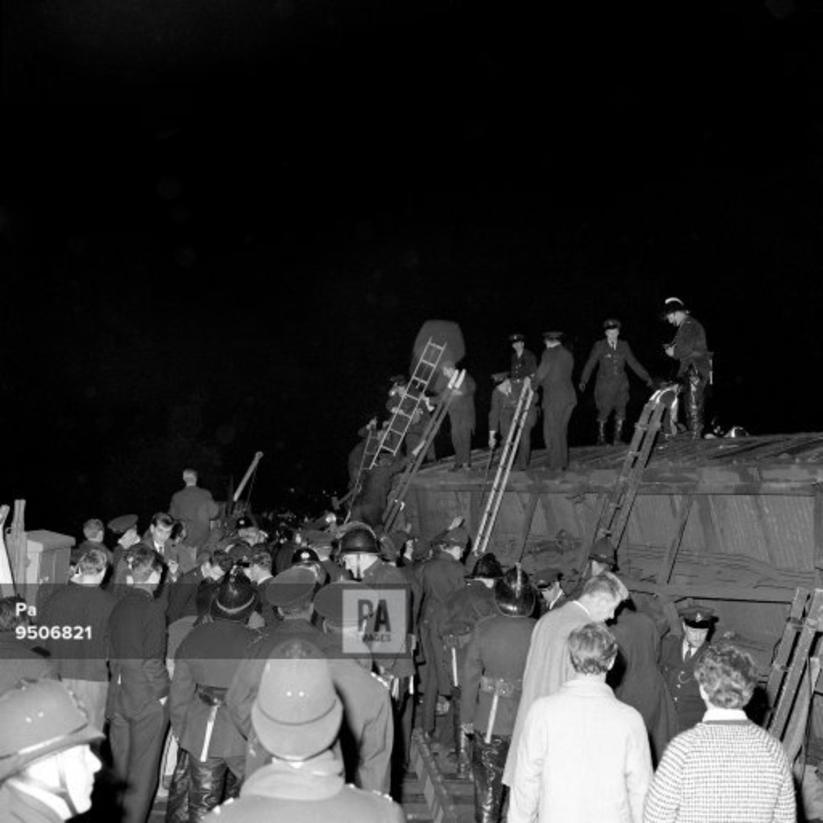 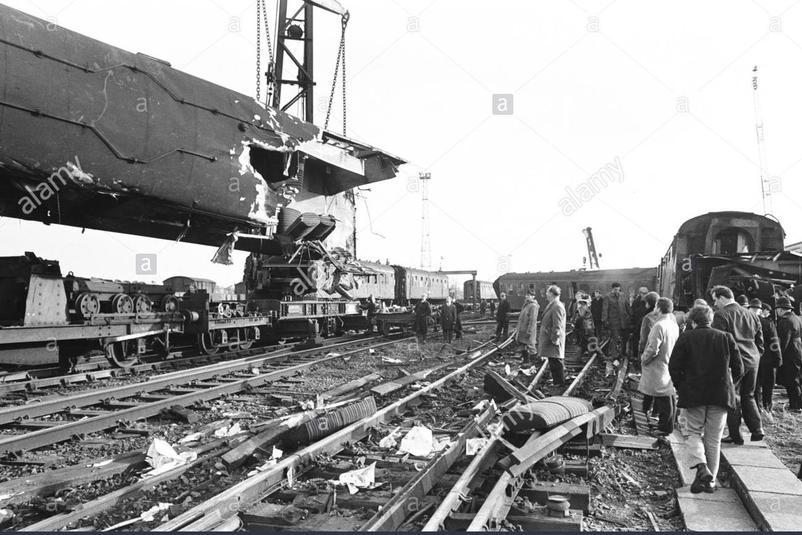 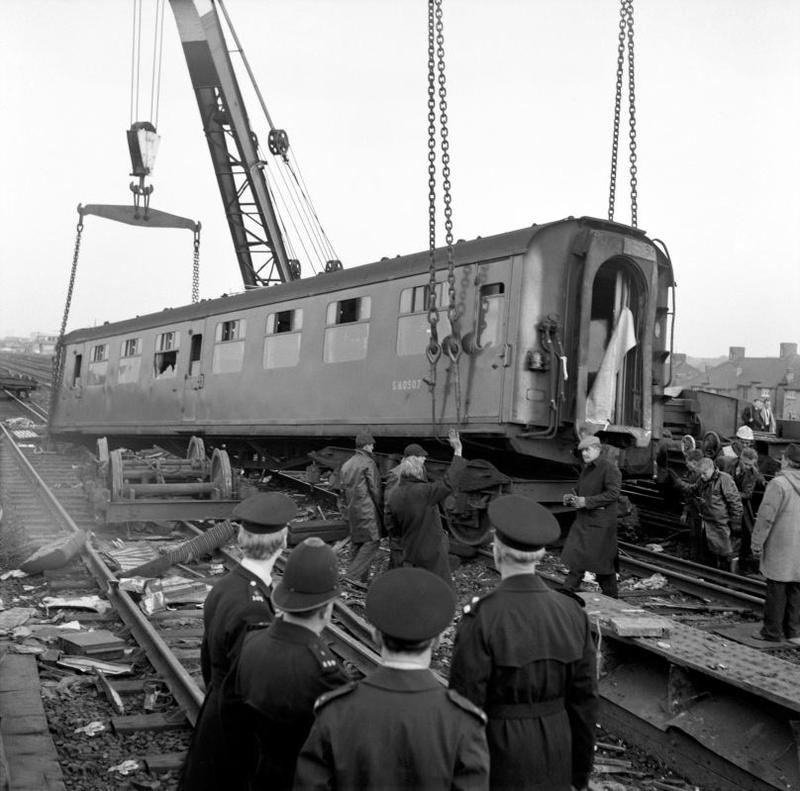 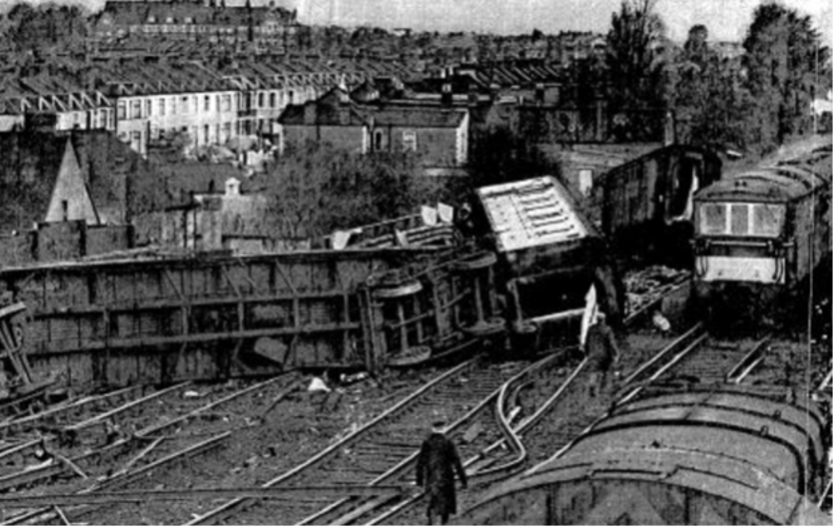 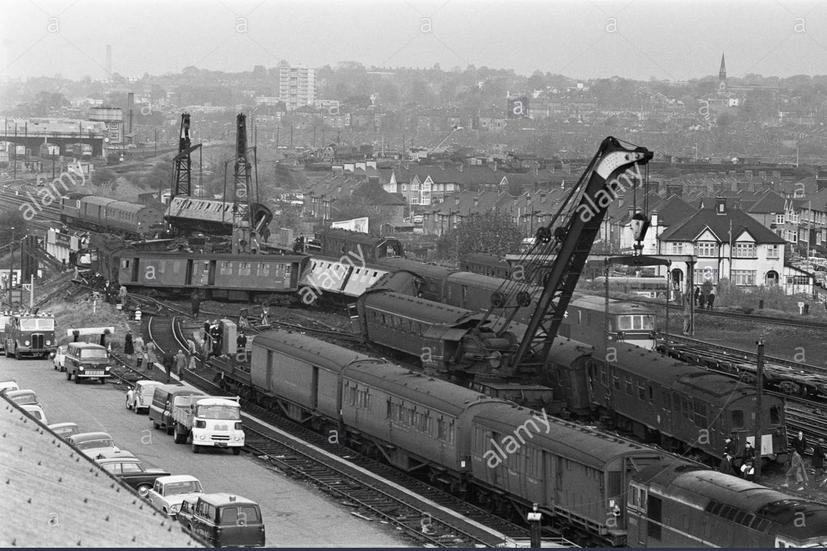 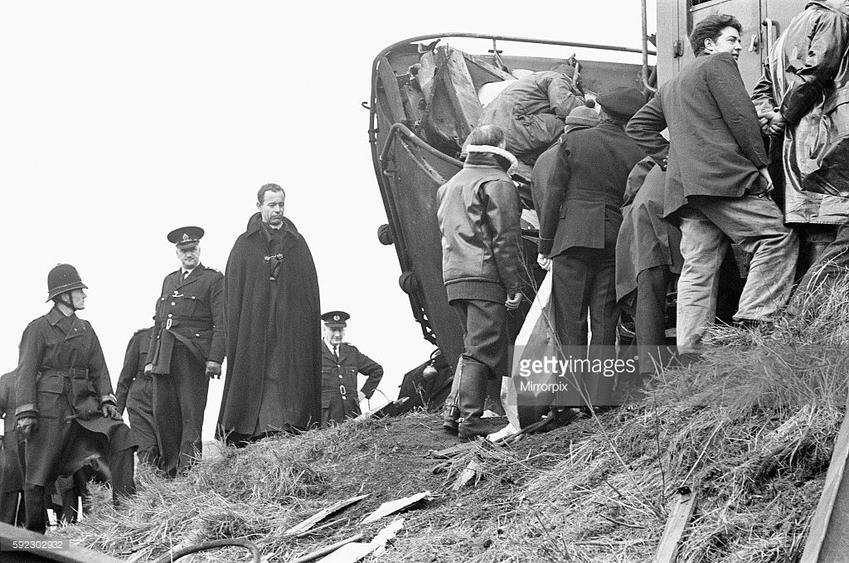 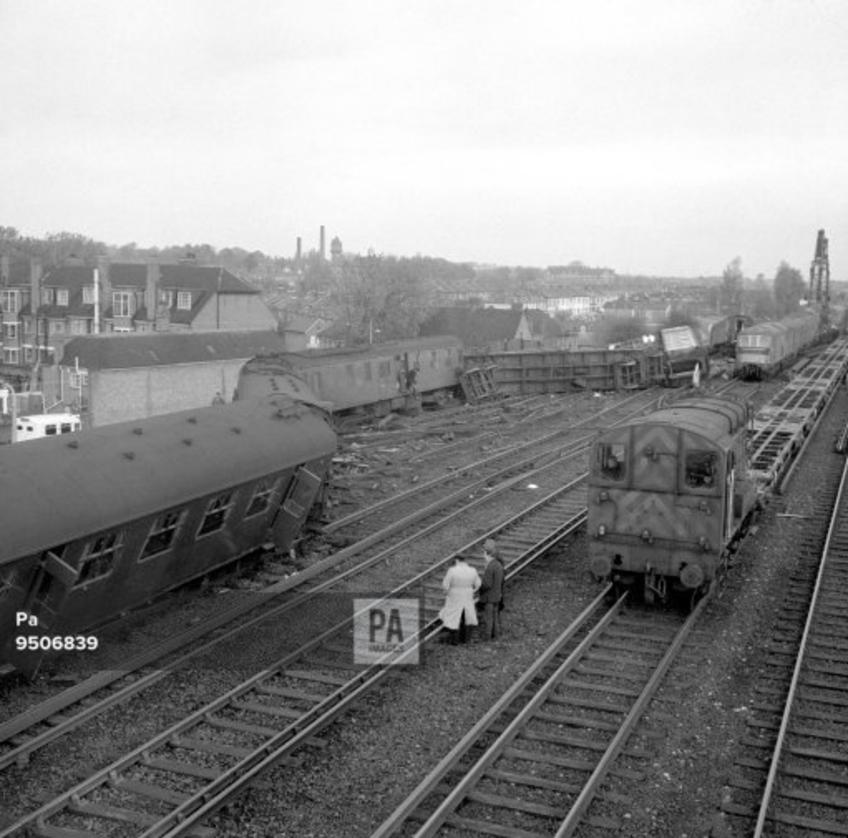 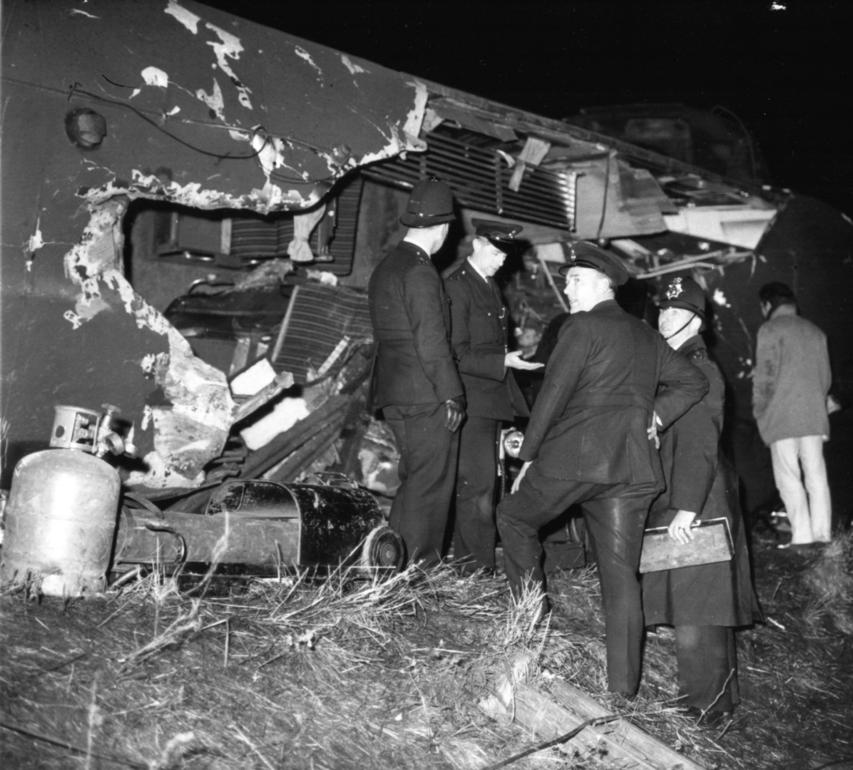 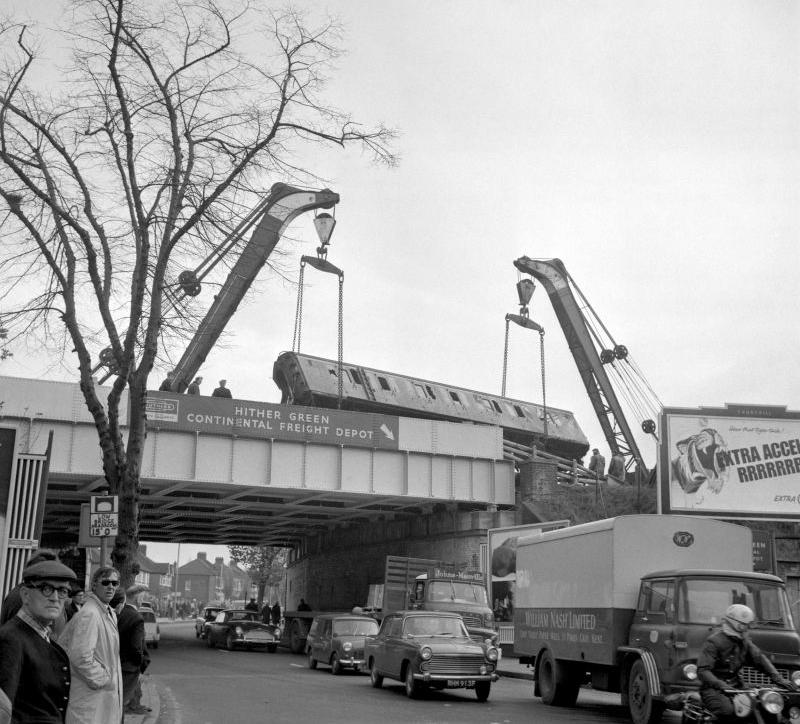 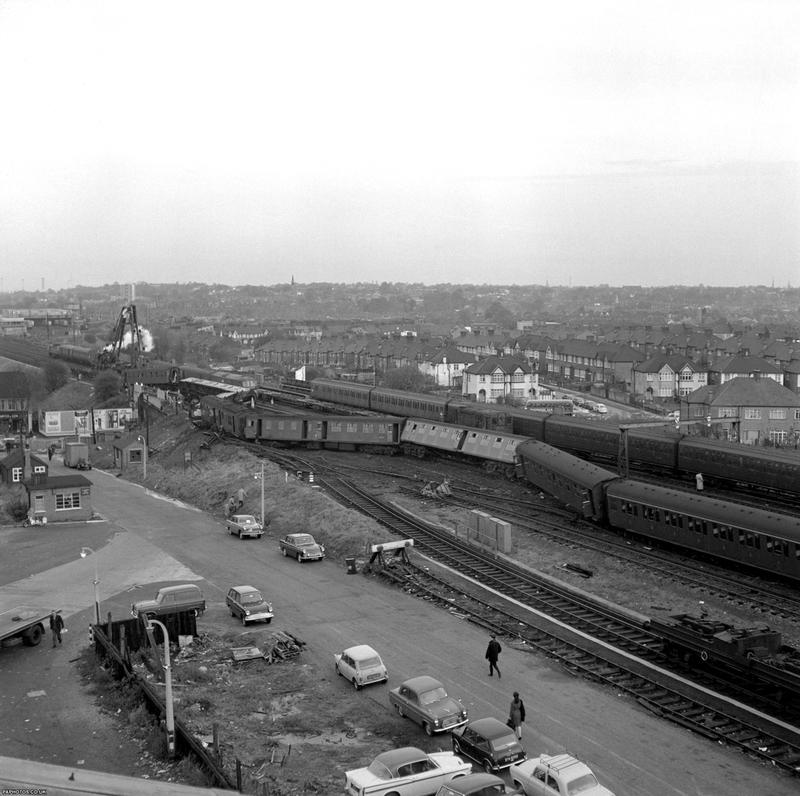 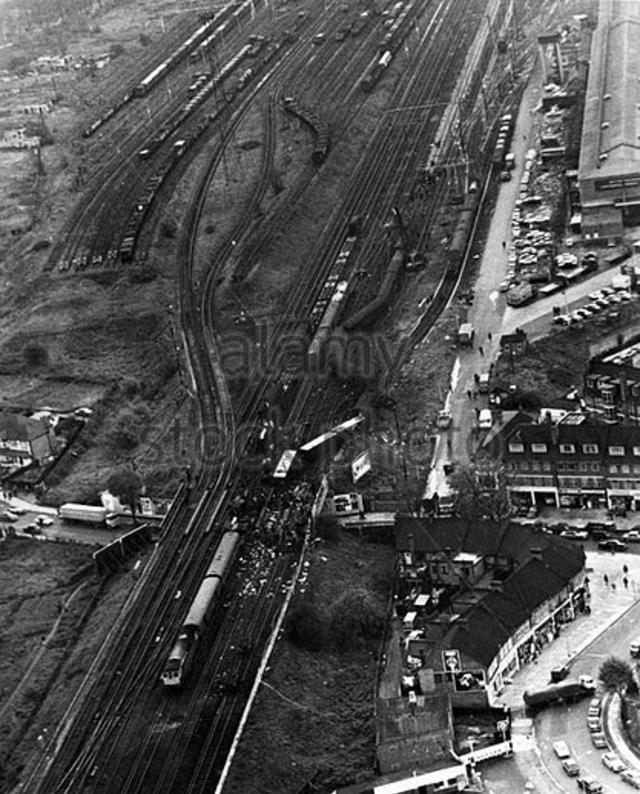 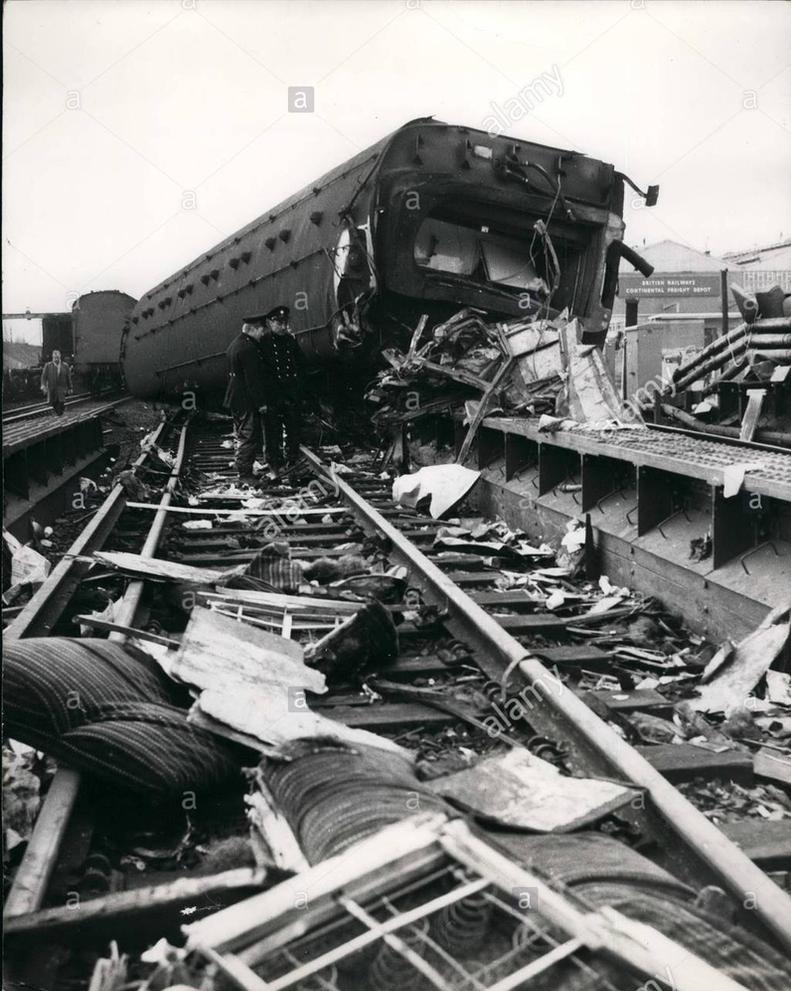 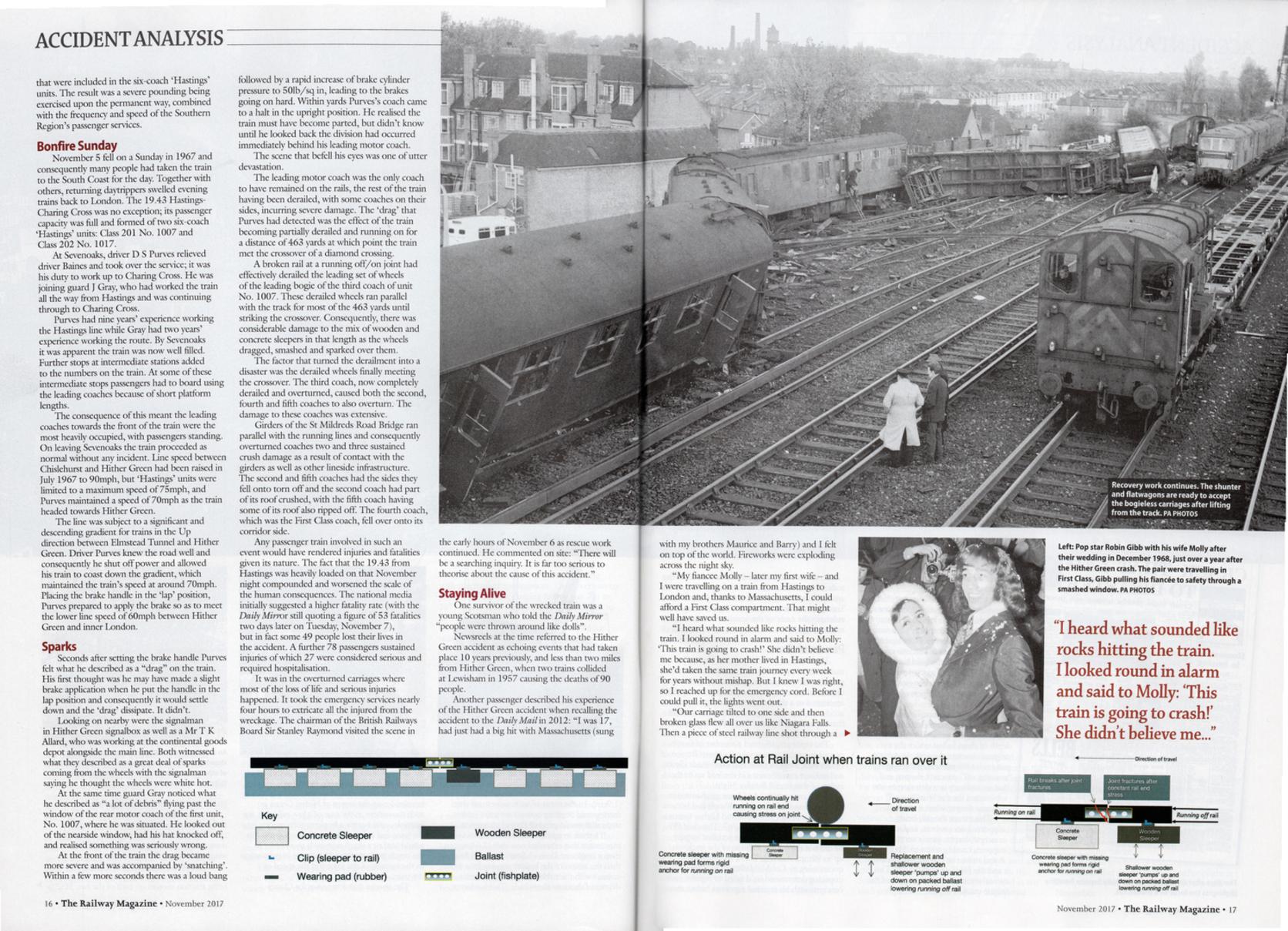 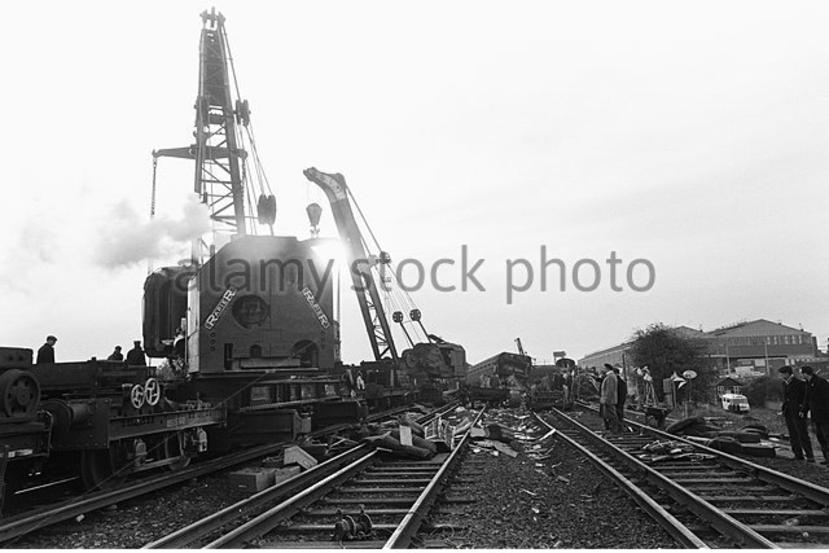 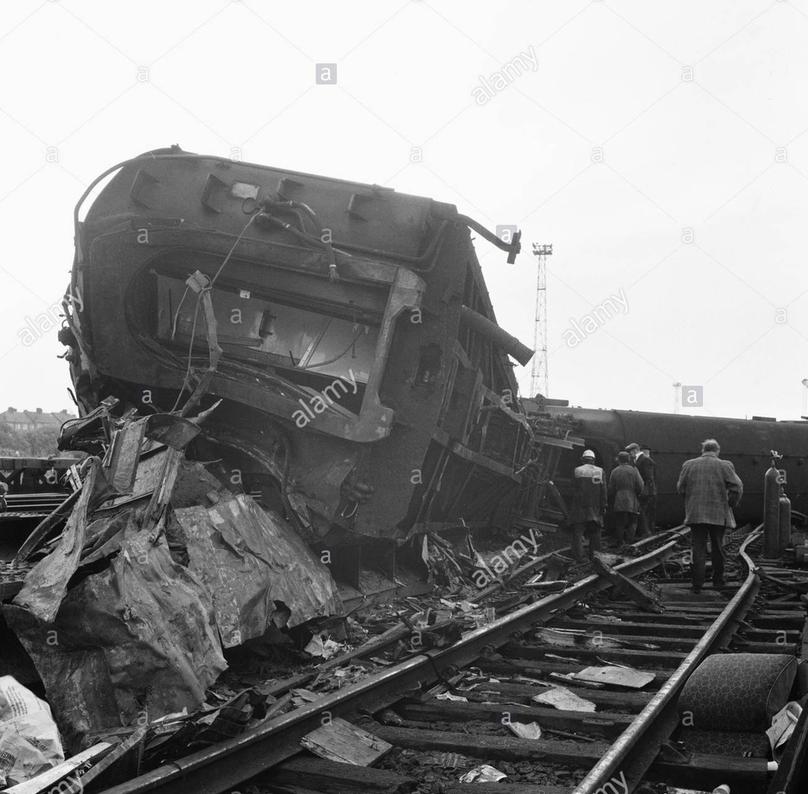 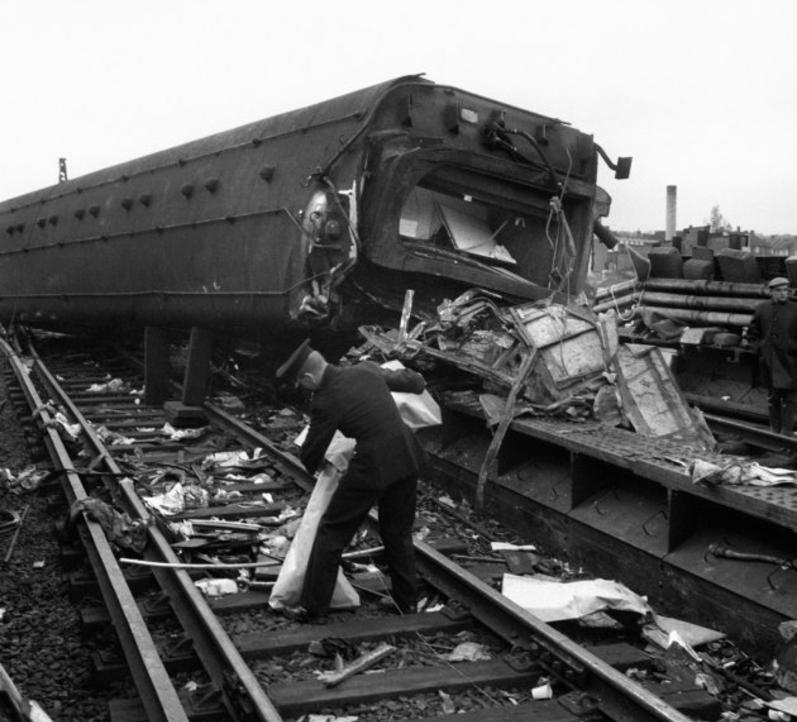 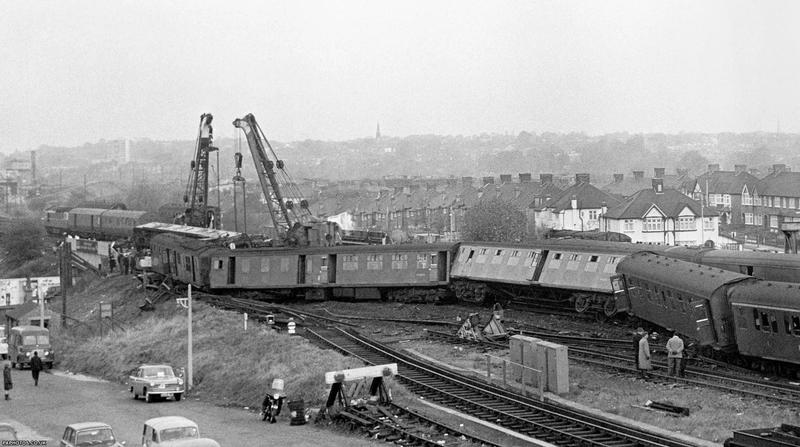 I know what it is to live through a mass disaster. Many years now separate us from the Hither Green rail crash in Lewisham, South London, but it haunts me to this day. It changed me for ever. Forty-nine people were killed and many hundreds more were injured, some of them terribly, on the evening of November 5, 1967.

I was 17, had just had a big hit with Massachusetts (sung with my brothers Maurice and Barry) and I felt on top of the world. Fireworks were exploding across the night sky. My fiancee Molly – later my first wife – and I were travelling on a train from Hastings to London and, thanks to Massachusetts I could afford a First Class compartment. That might well have saved us.

I’d flown in from Berlin early that morning, and as we boarded the train, Molly remarked that with all my flying around, I ought to get some travel insurance. An irony, given what was about to happen. Then we settled back in our seats, facing each other, me in a mac and trilby, and Molly  in a green-and-white coat with a fur collar.

Soon after we had passed Lewisham, I heard what sounded like rocks hitting the train. I looked round in alarm and said to Molly: ‘This train is going to crash!’

She didn’t believe me because, as her mother lived in Hastings, she’d taken the same train journey every week for years without mishap. But I knew I was right, so I reached up for the emergency cord. Before I could pull it, the lights went out.

I didn’t know it at the time, but we were hurtling along at 90 mph. Our carriage tilted to one side and then broken glass flew all over us like Niagara Falls. I had long hair, and the glass got tangled in it. It took me days afterwards to remove the shards.

Then a piece of steel railway line shot through a window and passed my face. If I had been standing an inch forward, I would have been decapitated.

The train came to rest. Our carriage was separated from the others. Molly and I looked out of the broken window, and all we could see were silhouettes of  all the other carriages – upside down, sideways, in the embankment, in the road.

Molly and I were covered in oil but otherwise unhurt. All around us people were screaming and moaning. We managed to climb out of a window and I helped other people out of their compartments. I did the best I could. One little old lady refused, though. She was holding on to her ticket and told me she wasn’t getting off the train yet as her ticket was to Charing Cross. The rescue services had to get her out. Eventually, we got up on to a bridge above the track.

Through it all, the Bonfire Night fireworks were flaring all around us. We were taken to a hospital in Lewisham so they could examine us. When we arrived there,  the scene was like something out of a war zone. All around us,  people on stretchers were being carried in. Some of the injuries were horrific.

It all got too much for me. I knew that I couldn’t help anyone, and I couldn’t cope with that.  I had to get away from the hospital. So Molly and I checked  ourselves out, and went to stay at the London home of Robert  Stigwood, our manager, then to my parents’ house in Buckinghamshire. I had a delayed reaction; in the days that followed, I started crying and crying and couldn’t stop.

Getting involved in the routine of composing and singing again really saved me. I’d written about terrible events on a previous occasion: the Bee Gees’ New York Mining Disaster 1941 was inspired by the Aberfan disaster (when a collapsing slag heap crushed the primary school in the Welsh village in 1966). It was our first single in England and our first hit. But I couldn’t write about Hither Green because I couldn’t bear to think about it. Nor do I ever dream about it.

I don’t wish to go around saying that I understand the Titanic tragedy because I lived through Hither Green, but I do think it is easier for me to walk in the shoes of the people who were on the Titanic. I’ve experienced some of what they experienced and there is some level of empathy. I have seen the terrible fragility of human life. 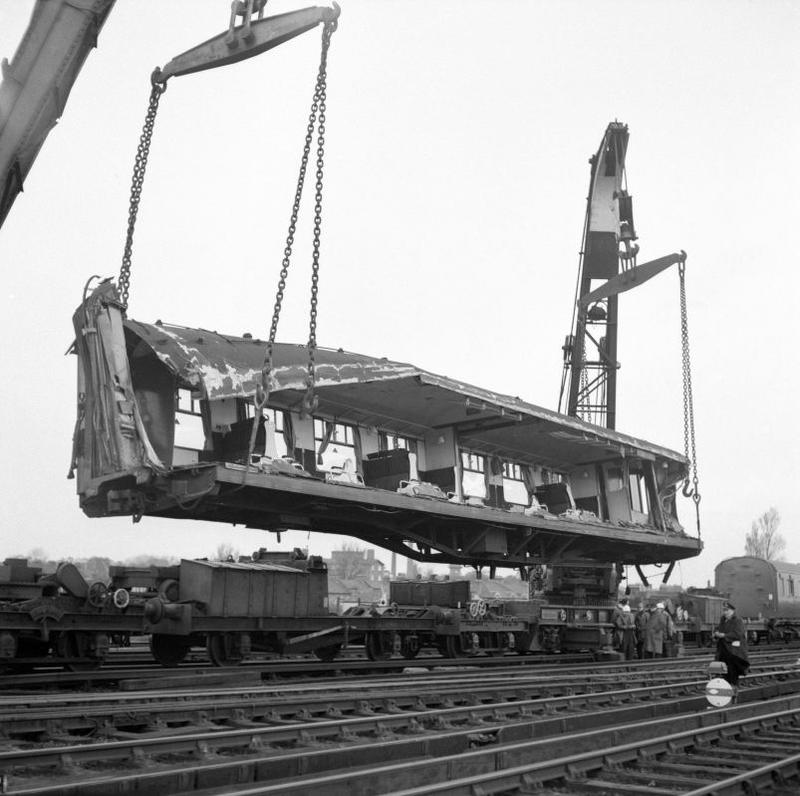 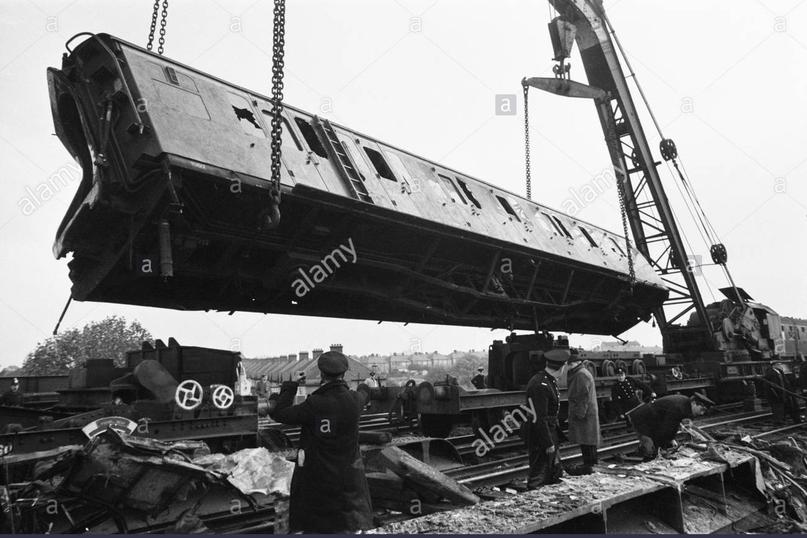 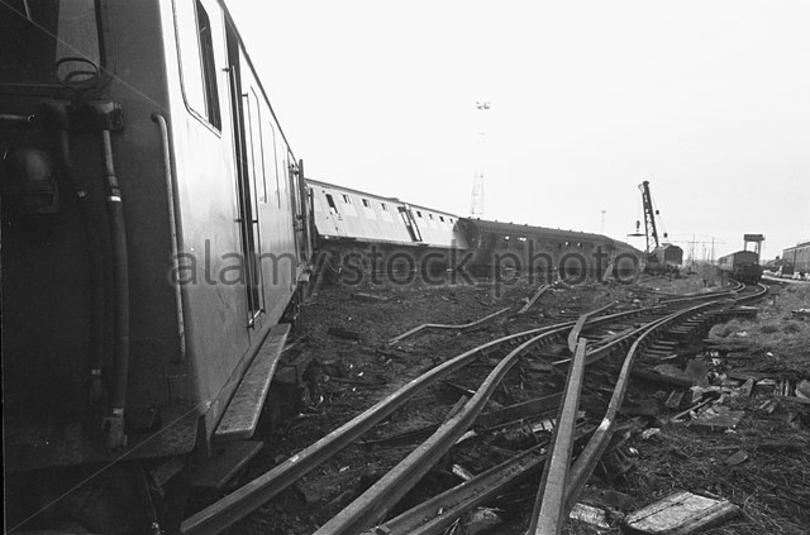 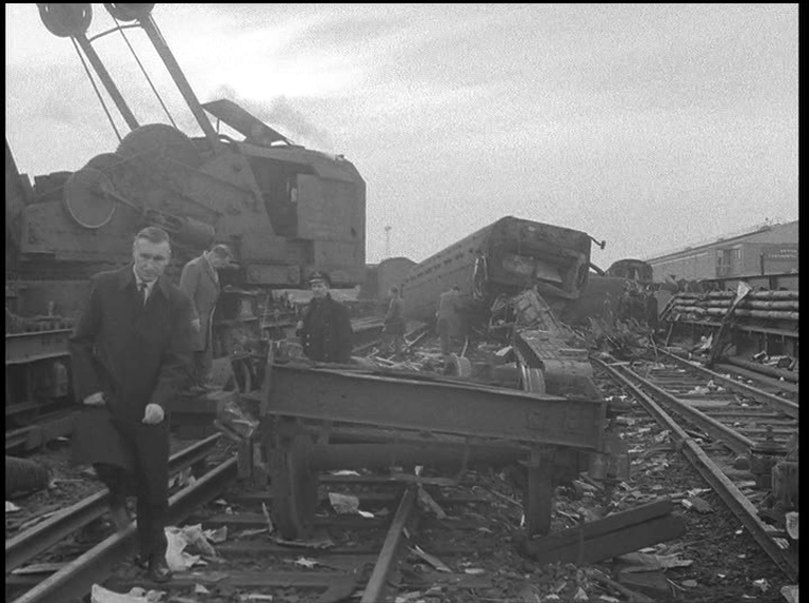 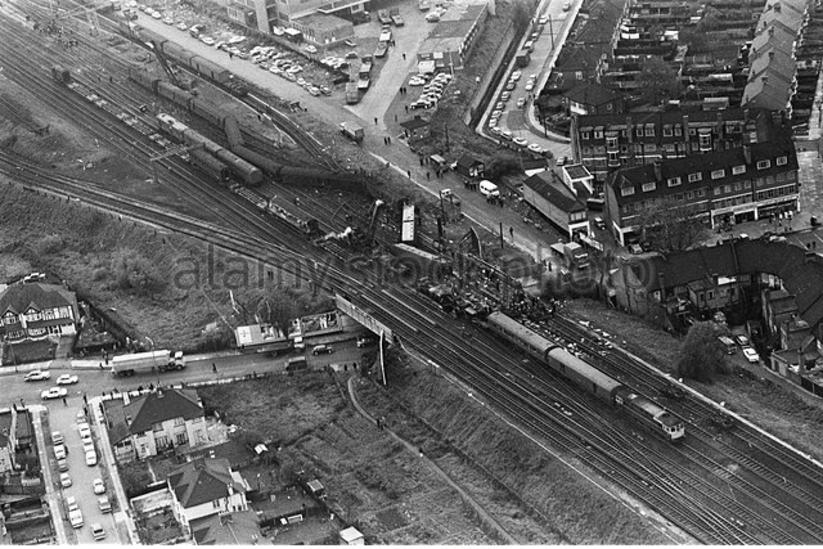 A couple of newsreels were made about the disaster, we have put them all together on our YouTube Page

​At 2116 hrs on a cold and damp Sunday 5th November 1967, the 1943 hrs Hastings to Charing Cross service was approaching Hither Green station in South London under clear signals on the up fast, and travelling at around 70 mph. The train was a 12 carriage combination of two Hastings units, consisting of unit 1007 at the front and unit 1017 at the rear. The train was well filled with day trippers despite the poor weather. Because there were a number of short platforms on the route and no inter connection between the two units, the front carriages were particularly full with reports that passengers were standing in the corridors.

At the time of the collision, the leading right hand side pair of wheels of the third coach became derailed towards the down fast line. After around 400yards the derailed wheels struck a crossover, causing the third coach, the second carriage in front of it and carriages four and five to turn over onto their sides and all the following carriages  in turn become derailed travelling a further 250 yards before stopping. The coupling behind the first carriage broke allowing the first carriage to travel some 250 yards further on and 750 yards short of the station.

The collision resulted in 49 passengers being killed and 78 being injured, 27 seriously; this was despite the fact that police and ambulance arrived at the scene within five and six minutes respectively and fire brigade only two minutes later. The first casualty arrived at hospital at 2134hrs, only 18 minutes after the incident. Attention quickly turned to the state of the rail in an effort to explain the derailment.

The Inquiry by Col McMullen subsequently heard evidence that a six inch triangular piece of rail had fractured at a rail end and had subsequently become detached. This piece of track was not otherwise worn and was quite new and when tested was found not to possess any flaws. So what had caused it to fracture?

The Inquiry heard that the ballast at the failed joint was not clean; one of the concrete sleepers was not supported properly and that a wooden sleeper had been used to replace a concrete sleeper. All this meant that the sleeper had been pumping (up and down lateral movement) causing the ballast to reduce under the joint and that this lack of ballast support had caused the rail end to fracture at the first hole for the fishplate. Questions were also raised about the standard of the maintenance of the track in the area.

This type of fracture was noted to be more common where electric multiple units were used, caused by the greater weights on the smaller wheel diameters and it is clear that the Hastings units, with their heavy under-slung traction motors and smaller diameter wheels would have contributed to this deterioration in the track. This effect is multiplied with higher speeds and this particular piece of line had recently had its line speed increased, without any corresponding reduction in track maintenance periods.

This accident eventually led to more extensive use of continuous welded rail and a strengthening of the rail web as well as improved inspection and jointing techniques.

The relevance of this collision to the preserved thumper story was that unit 1001 (The preserved Hastings Limited unit) was subsequently used in tests on Southern and Eastern region lines (the eastern region lines were thought to be better maintained) as a direct result of this collision.  Another interesting point was that a survivor of the crash was pop singer Robin Gibb of the BeeGees.

Ministry of Transport (1968). Report on the Derailment occurred on 5th November, 1967 near Hither Green. Her Majesty's Stationery Office.