Murder on a Thumper​

On Monday 29th June 1964 a 12 year old male train spotter was travelling in Unit 1107 on the 3.25pm Southampton to Reading thumper service when he had the misfortune to open the unit’s toilet door as the train approached Basingstoke. Lying on the ground was 15 year old Yvonne Laker, the daughter of an RAF officer based in Singapore who was travelling back to her boarding school after spending the weekend with her grandparents. She had got on the train at Southampton Central and somewhere between there and Basingstoke she had been brutally murdered, having her throat slashed with a broken sherry bottle. The frenzied attack appeared to be motiveless and police confirmed that she had not been sexually assaulted.

Sixty passengers had been travelling on the service and within hours some 40 passengers had contacted police and been eliminated. Yvonne had been wearing a grey blazer over a blue dress and her holdall had been found in the centre carriage. Her shoes and beret had later been recovered from the line around 10 miles south of Basingstoke. It was believed that she was murdered just afterWinchester.

Detectives were convinced that the killer had left a vital clue behind in the form of a brown paper bag with a reinforced bottom, similar to that supplied by wine retailers. In the bag was a grease-proof bread wrapper and some Marks and Spencer’s biscuits. The bags owner never came forward, reinforcing the belief that it was owned by the killer.

Three days later a 27 year old male was arrested for driving offences and whilst being interviewed mentioned that he had seen Yvonne’s murderer, having been a passenger on the train. He claimed to have been on the train as a result of making a mistake and provided police with what they subsequently determined to be an implausible story of his actions on the day. He was subsequently charged despite maintaining his innocence throughout.Type your paragraph here. 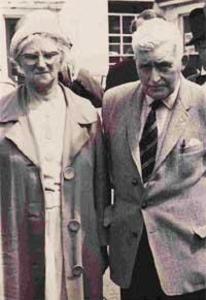 Jeremy Hutchinson QC, led the case for the prosecution at the Hampshire assizes at Winchester on November 23 1964. He described in detail how the innocent schoolgirl had been knocked unconscious with a sherry bottle that had shattered on impact before being dragged to the toilet where her throat was cut. The defendant was found to have a shard of broken glass in his pocket that he could not account for.

Various railway staff had reported that they had seen a man on the track as the train slowed down at Basingstoke when the emergency cord had been pulled by a passenger upon the discovery of the body, but this individual did not match the description of the defendant. Indeed, there was no blood on the defendant’s clothes despite the lavatory being heavily contaminated and none of the girls fibres were found on his clothing.

On the 1st Of December, after 6 hours deliberation, the individual was found Not Guilty of the offence and to this day, no-one has been convicted of Yvonne’s murder.

Although the offence occurred in the toilet, this and other assaults provoked the railway authorities to remove the isolated, 12 seat second class compartment at the end of the Driving Trailer Composite and converted them to luggage compartments.

http//www.truecrimelibrary.com/crime_series_show.php?id=1382&series_number=11. Accessed on the 18th October 2012