From 2000 onwards, the units were overhauled, and most repainted into a new livery of blue and yellow, with pictures of dinosaurs.

002 is seen departing Smallbrock Jcn, this station was built purely to connect with the steam railway and is therefore unique as the station has no exit. 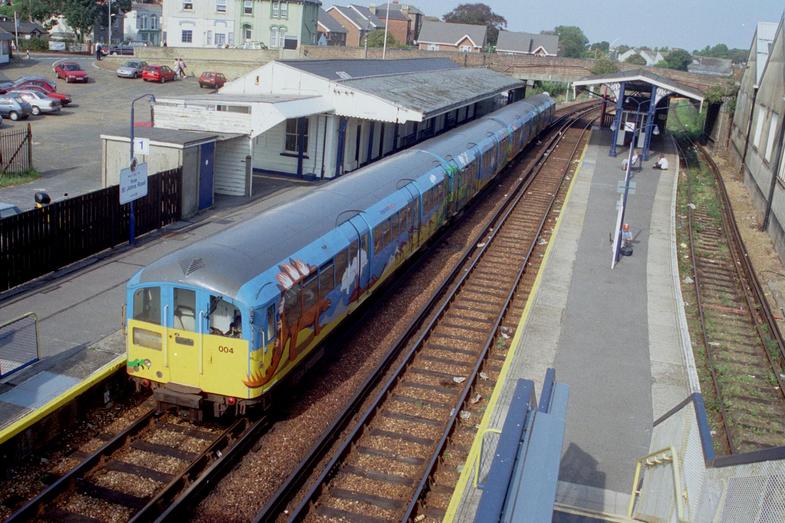 Ryde St Johns is the largest station on the Island as this is where the depot can be found.

004 is seen with 002 heading towards Ryde Pier, the building just visible on the right is the side of the depot

006 is seen on the pier heading South, the rusty construction between the walkway and railway was once the pier tramway, this was two lines which were not connected to each other and a tram used to shuttle back and fo on each one

The Spare vehicles which were plated over at Eastleigh and brought over incase spare shells were needed but these were scrapped at the same time as the others when the fleet was reduced. the vehicles are 10139 (above) and 11171 (below) these kept their original numbers and never allocated BR numbers 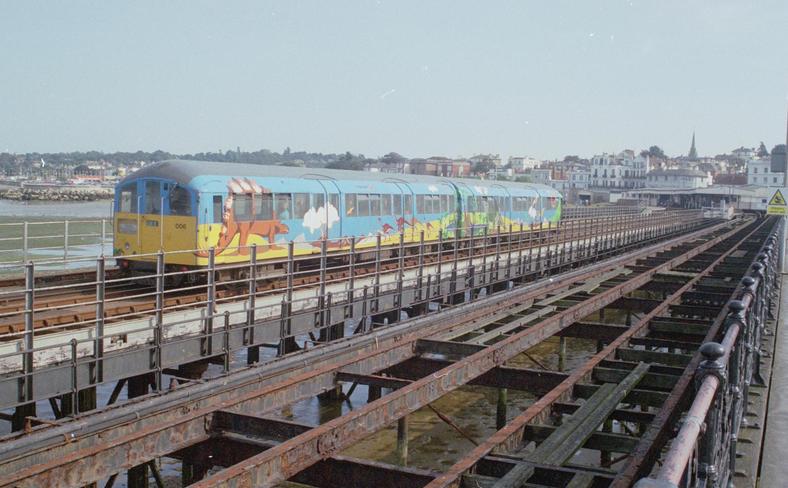 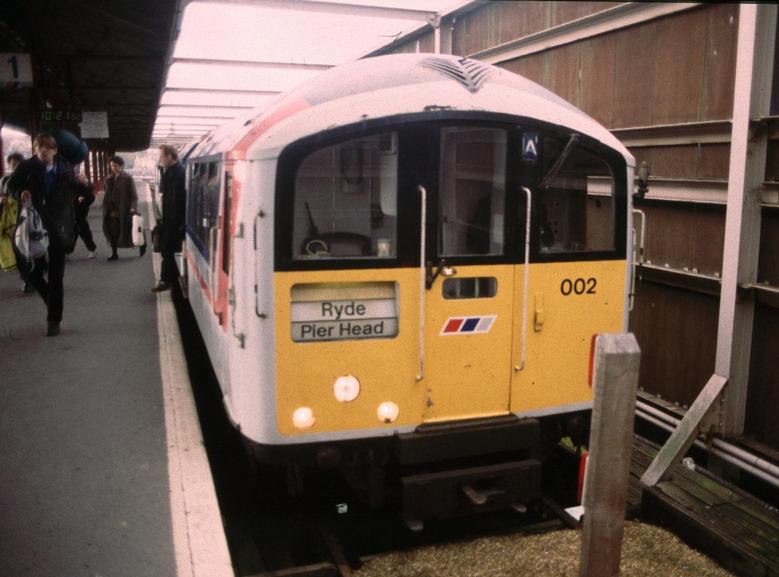 Unit 002 is seen just at Ryde Pier, one of the few modifications made was removal of two marker lights, there was originally two above as well as the pair below the main headlight 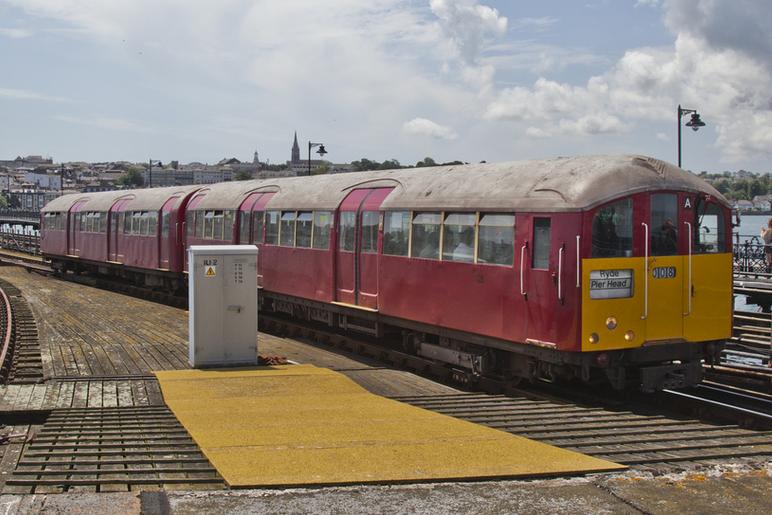 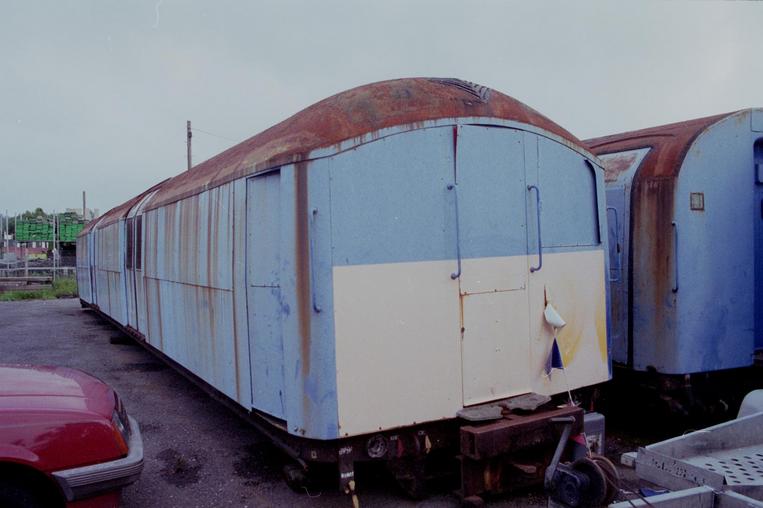 Unit 008 is at the Pier, note the number is now carried inside the the door instead of being painted on as the previous liveries 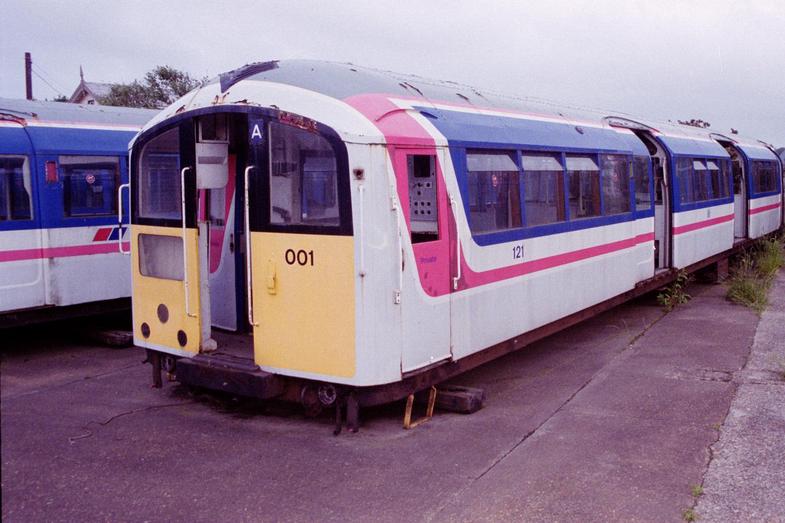 The Isle is Wight is famous for its use of former London Underground tube Trains.

The first of the former tube stock was sent over in the 60's and consisted of the very antiquated Standard Stock from the 1920's.

In the 1980's it was realised that these trains were now getting on a bit so the decision was made for 'new' trains and once again former Underground trains were purchased but this time dating from 1938.

The reason tube stock was used was due to a low tunnel at Ryde, in steam days it was considered low as it was 25cm lower than standard but as it was prone to flooding when electrification happened in the 60's the decision was made to raise the track by 25 cm leaving the overall hight 50cm or 20 inches lower than normal which made tube stock an obvious choice.

As I write this in October 2019 the days are numbered for the 1938 stock and I was going through my photos taken over the years and thought I should do an article. 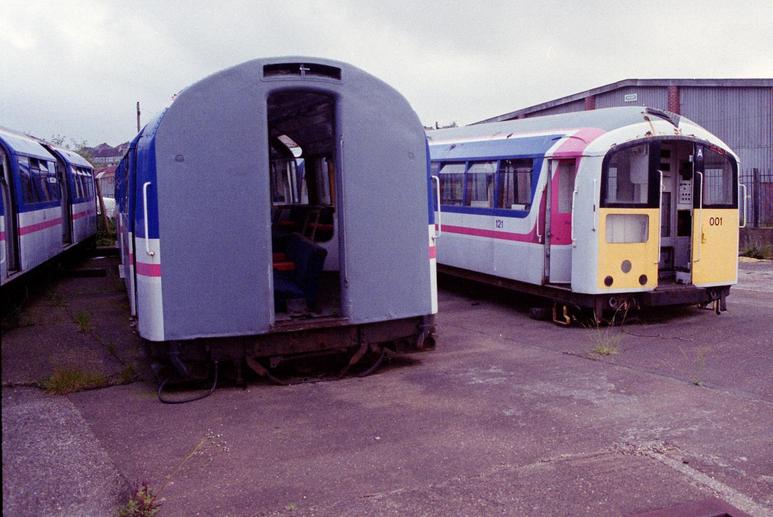 A crew change at Ryde St Johns with unit 004

In 2003 the first of the heritage liveries was applied, this was a red similar to the original but with a yellow front, all the remaining units were eventually painted in these colours. 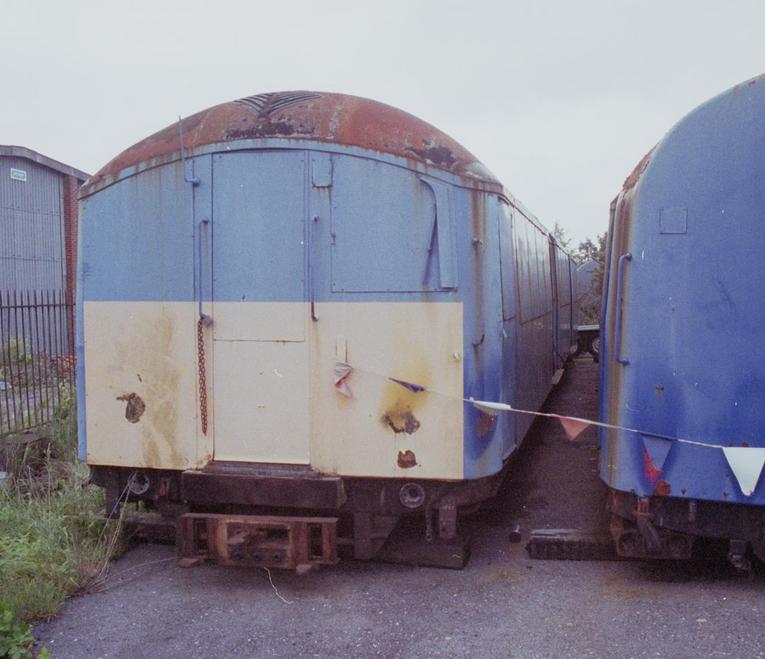 222 from unit 002 is at the rear, 002 is still running today but the D end vehicle was switched with 225 as it was in better condition

The first unit, 001, arrived on the Isle of Wight on 5 July 1989, followed by another 8 along with 2 bare shells incase major repair was needed.

on Underground stock the ends of unit are classified by either A or D this comes after the axle numbering, this is something the Underground done until the newer generations of trains came into use. the only time it became a problem is if a unit got turned round and there was differenced in the couplers but that wasn't going to happen on the island and all trains were formed A end North to Ryde and D south towards Shanklin

When the railways were privatised in 1996 it was decided that it didn't need 9 units so the units in the worst condition were withdrawn, the bodies of the vehicles were dumped in the disused part of the carpark at Ryde and over the next couple of years stripped for spares, above is 121 from 001 which was the first of the 38 Stock on the Island 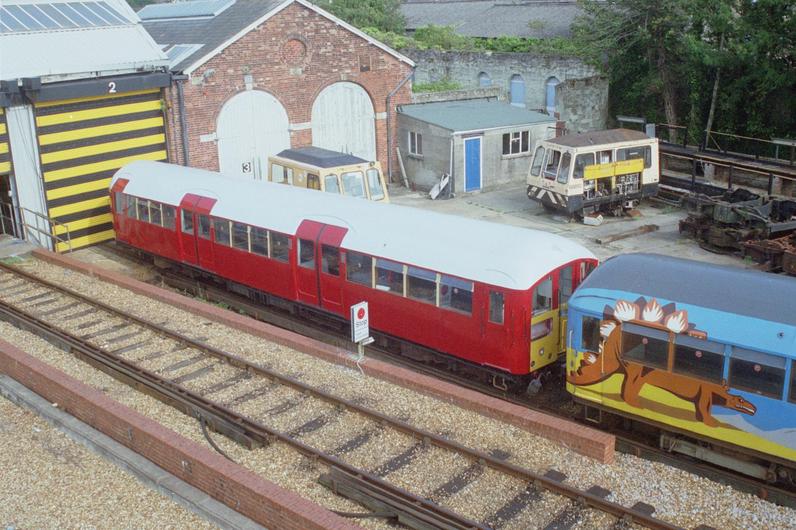 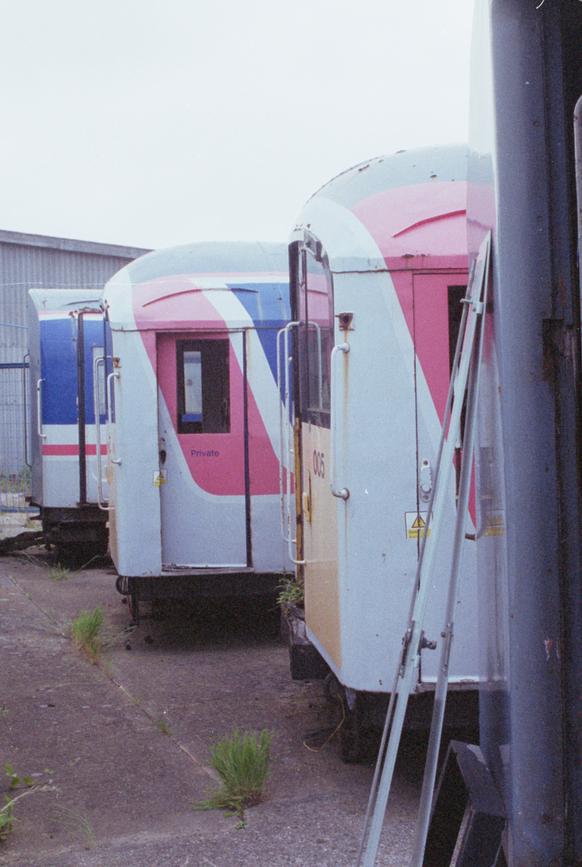 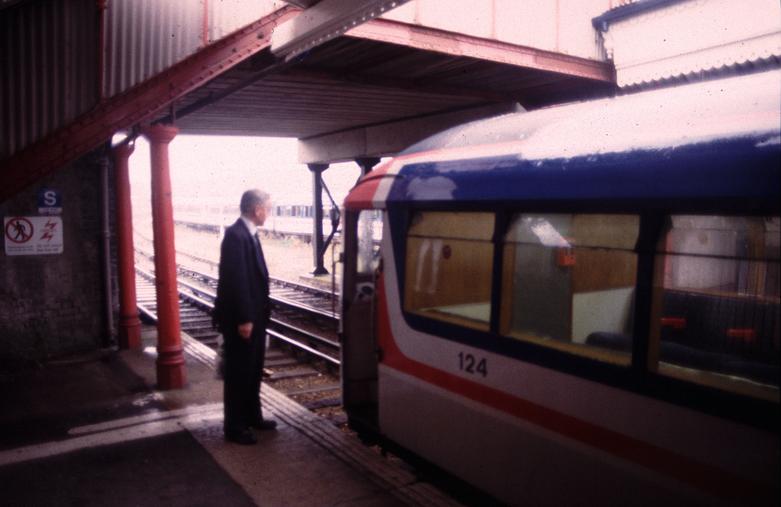 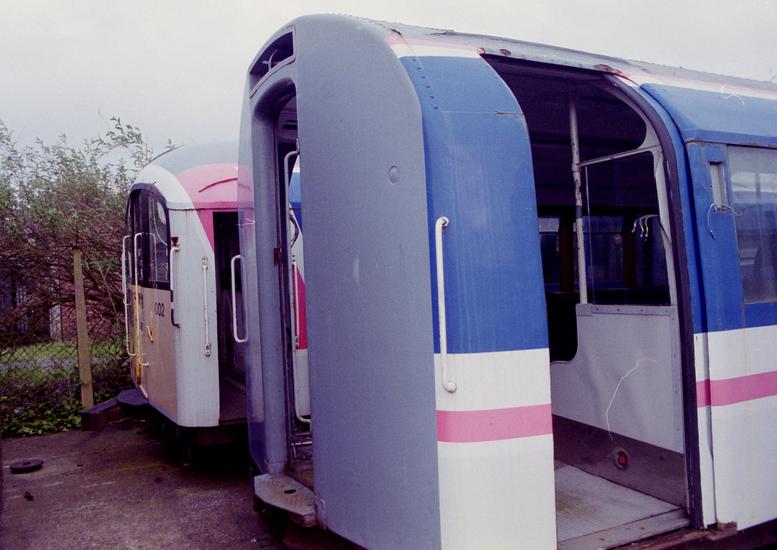 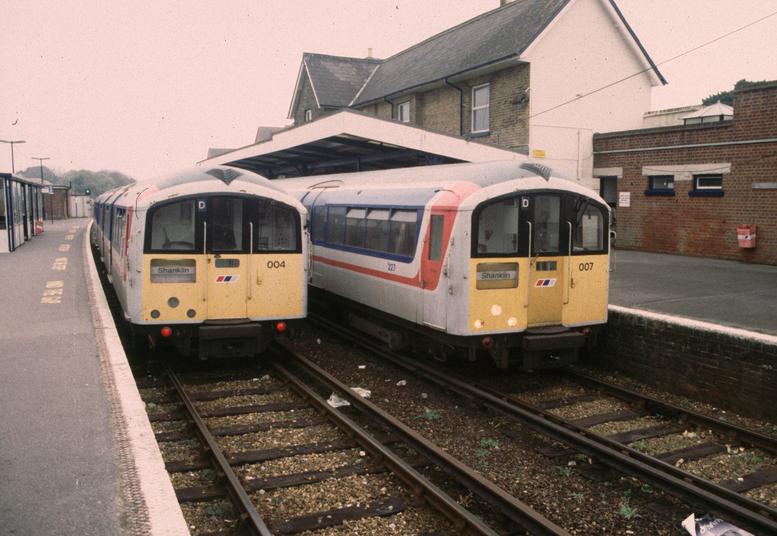 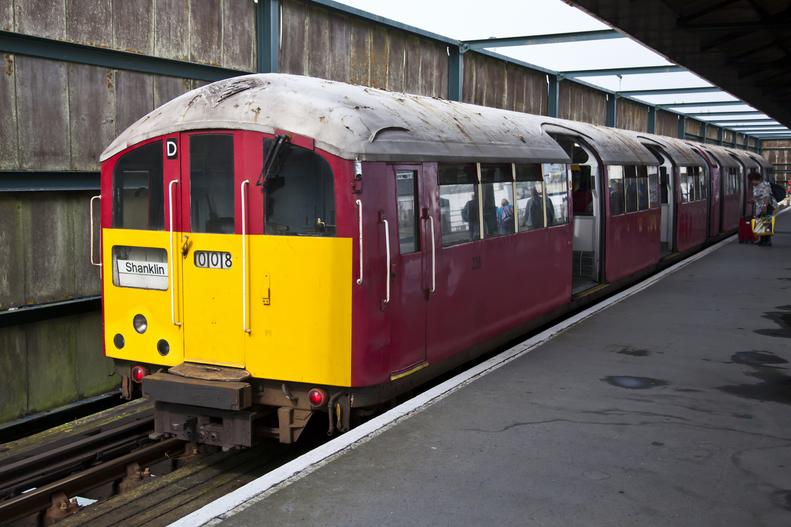 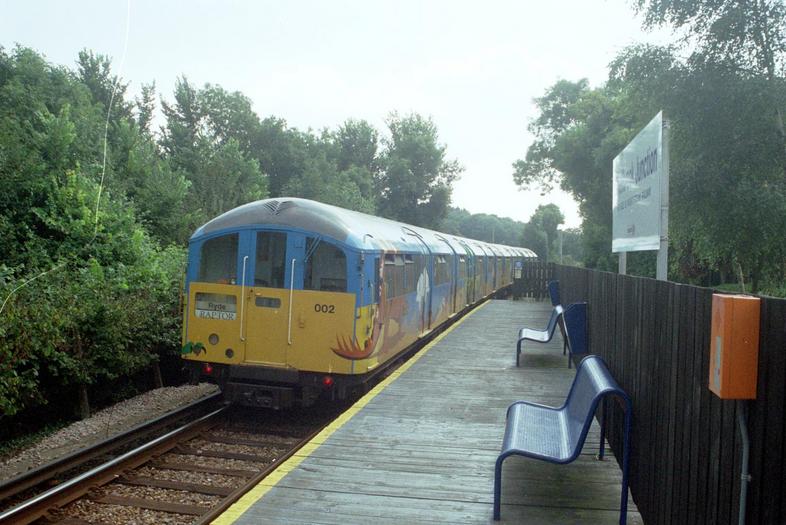