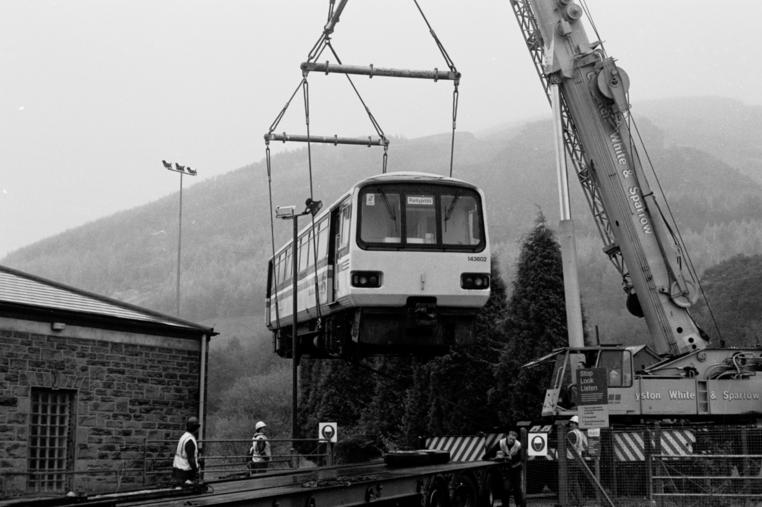 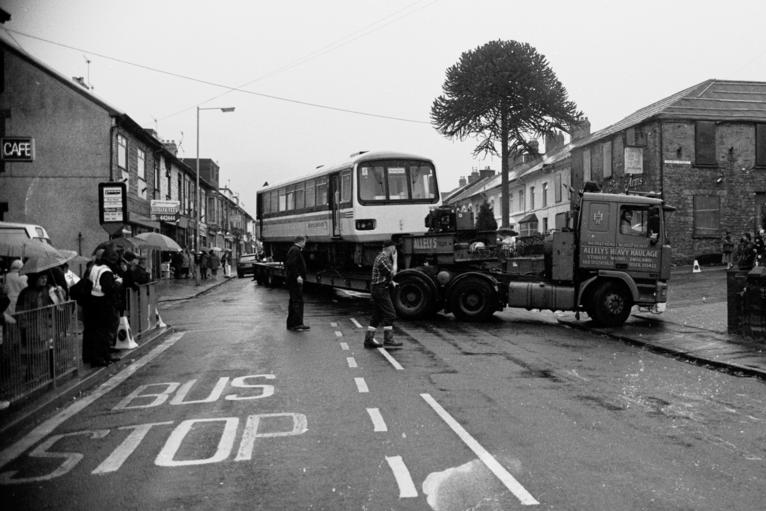 The lift wasn't an easy one due to the location of everything on the site.

The truck couldn't park alongside the unit as there were gas pipes just under the surface and they were worried about rupturing them and there was nowhere to park up winch the vehicles on board, so the trucks had to park at 90 degrees to the truck.

you may think thats an easy enough link but bear in mind the station building was in the way for a simple swing round.

Also it couldn't be lifted over the building, because of the rigging straps on the lifting harness the crane could lift it much higher 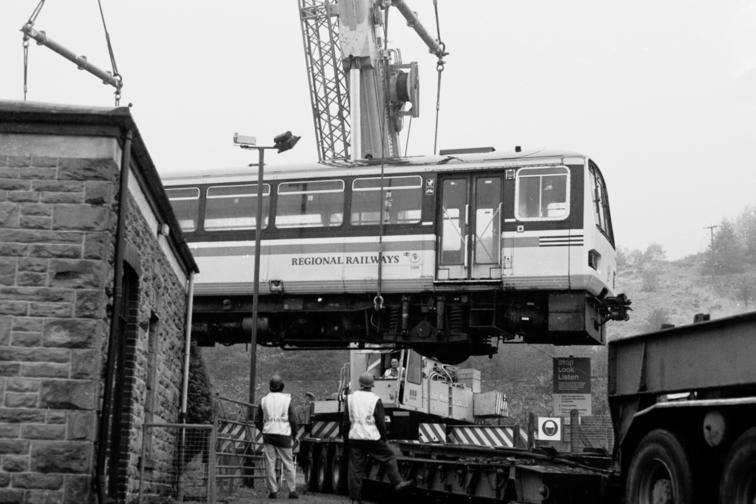 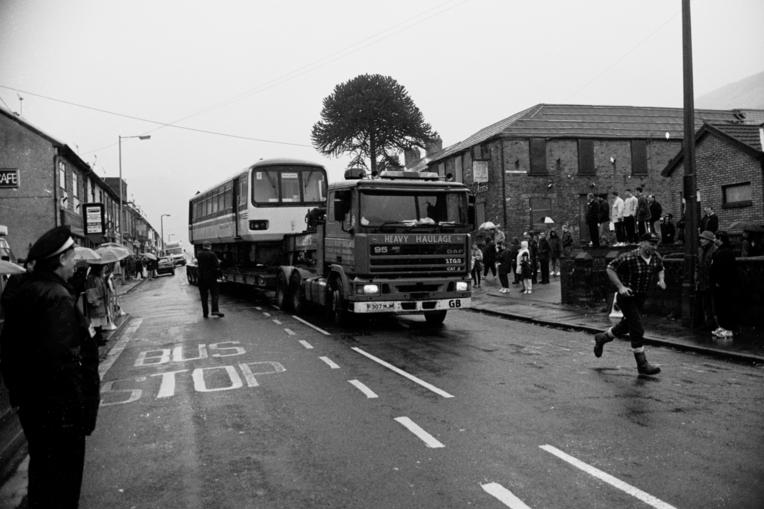 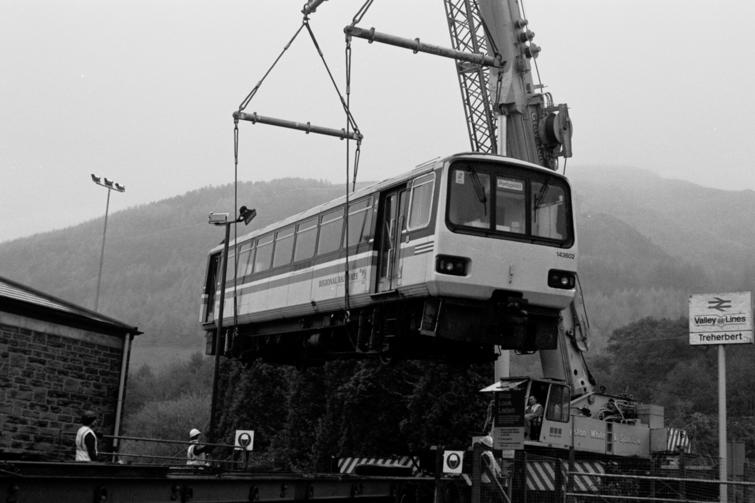 The next problem was to get the trucks out of Station Road, like a lot of small town stations the approach road leaves the main road at 90 degrees so it has a tight turn to negotiate. 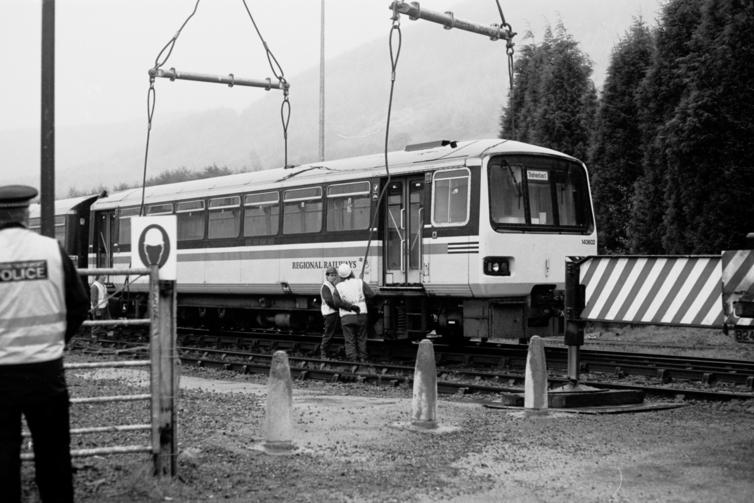 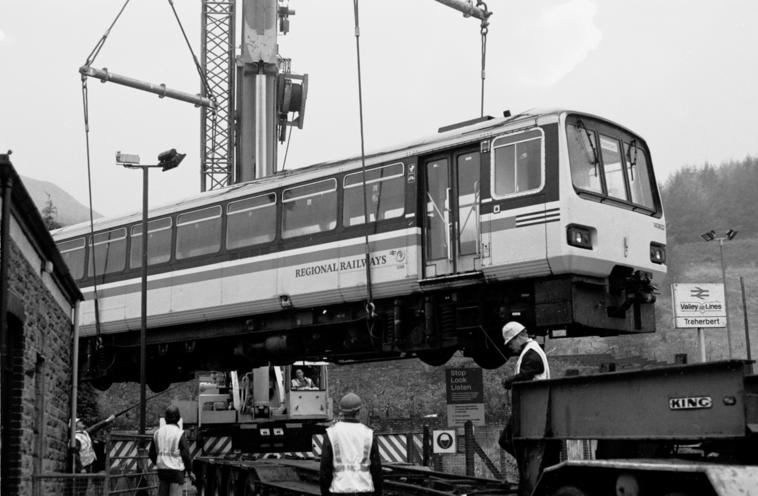 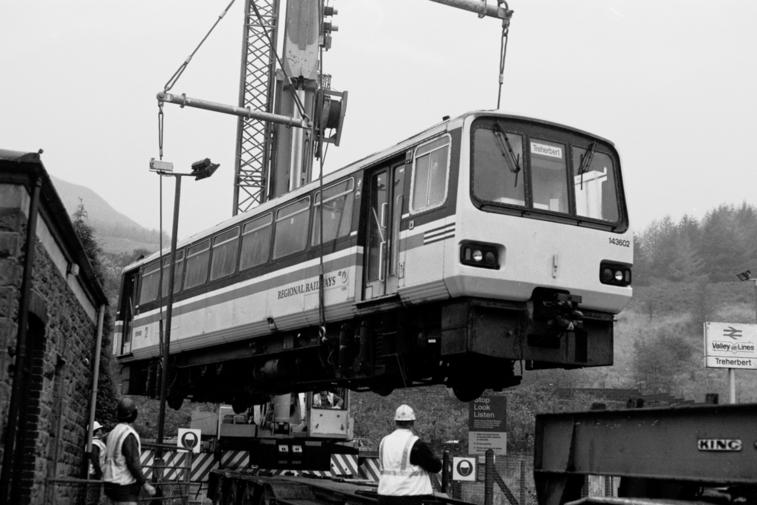 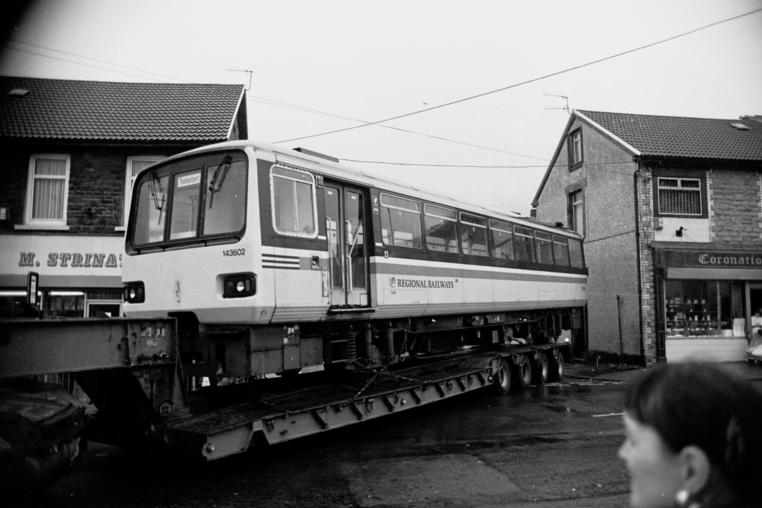 The second vehicle was the harder to load, as it also had to be turned an additional 180 degrees.

This was the lead vehicle which struck the object and if you look around the skirting below the coupler and equipment under the cab in these shots you can see traces of damage, there was a lot of damage done underneath 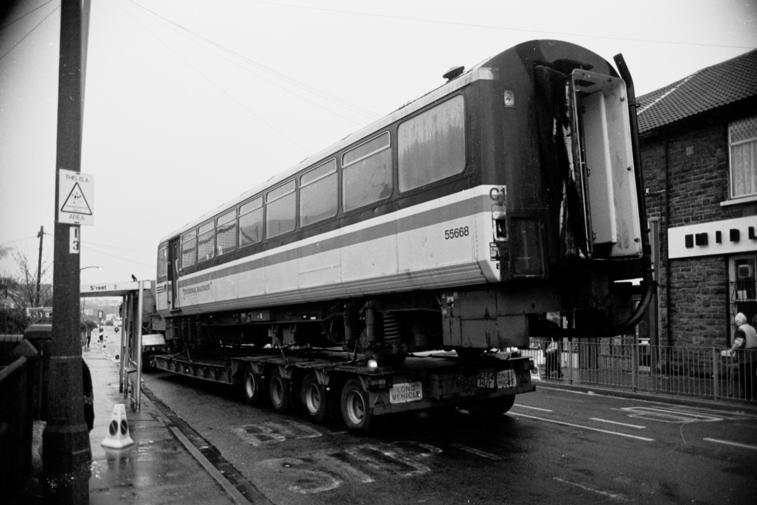 because of a small wall just out of shot on the right he couldn't take a wider swing and the railings and bus stop on the left is preventing it swinging round. At this point everyone was starting to thing the railings would have to be removed but they decided to take it from another angle. 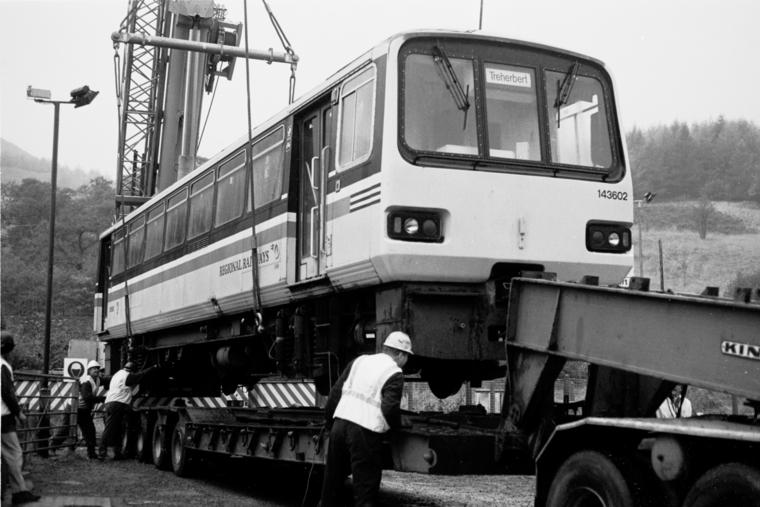 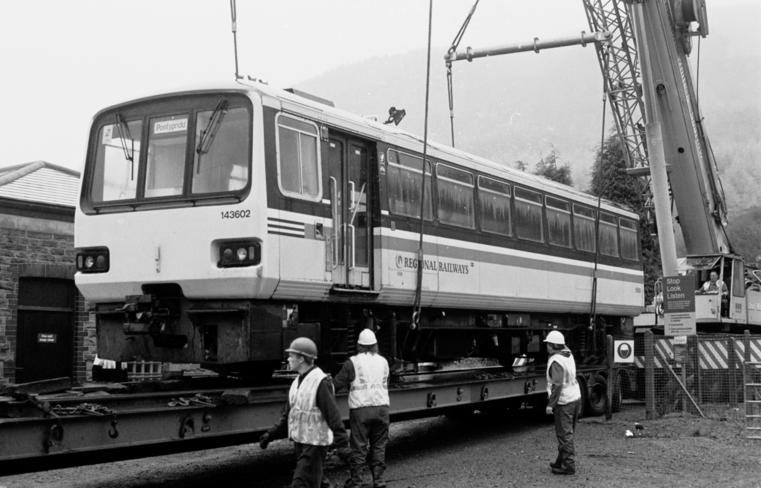 Even though it looks ok there was a lot of damage done to the unit and the drivers based there at the time told me it couldn't be declared fit to be towed. 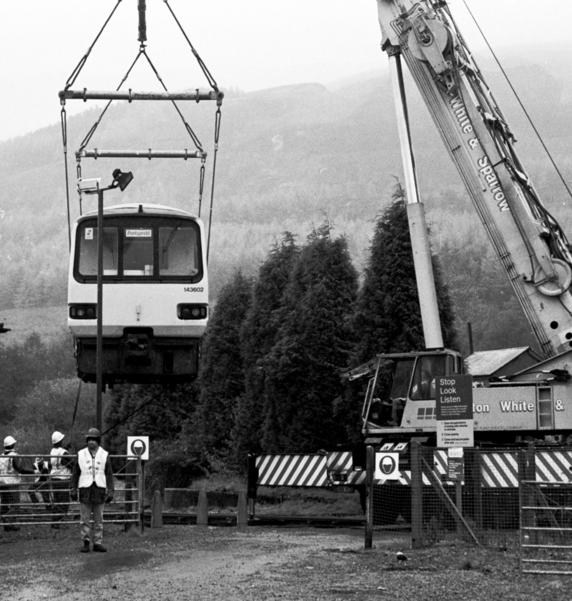 This was the view which met me on the was to the station on the Friday morning, 2 of Allelys finest Dafs on the station forecourt. 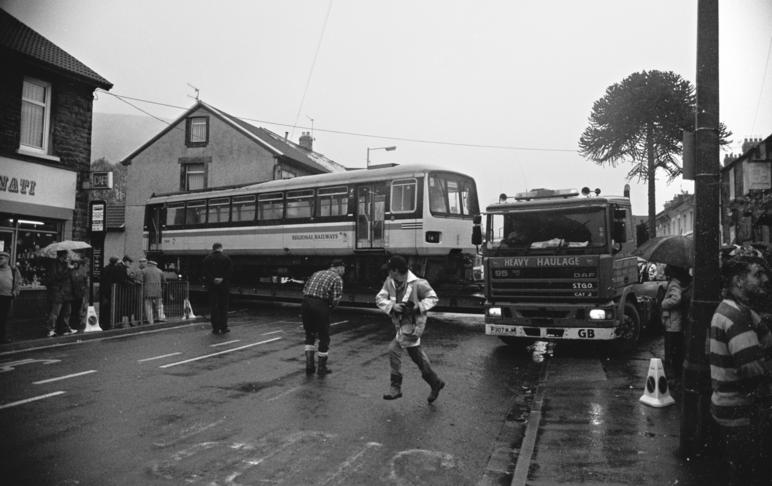 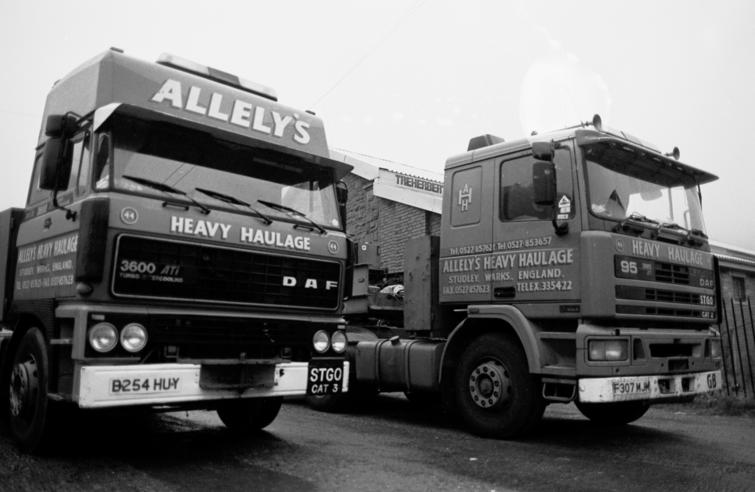 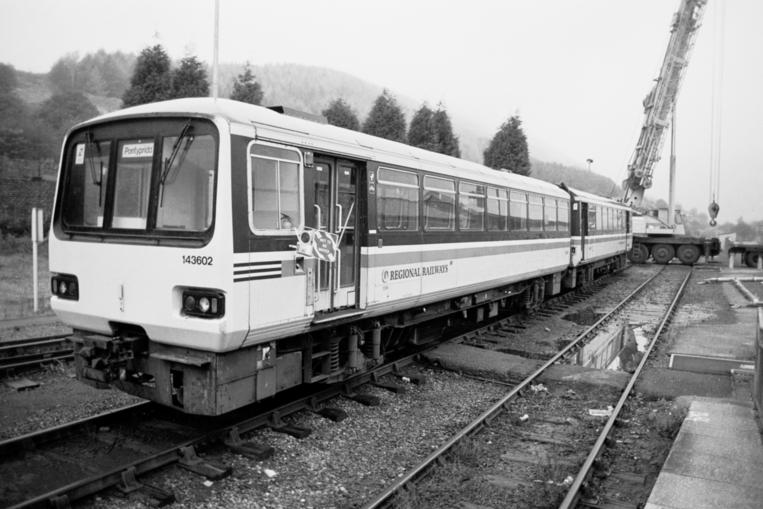 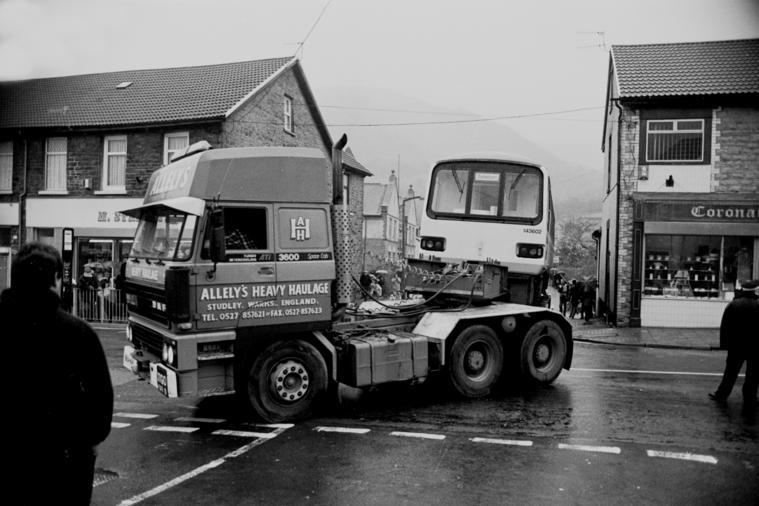 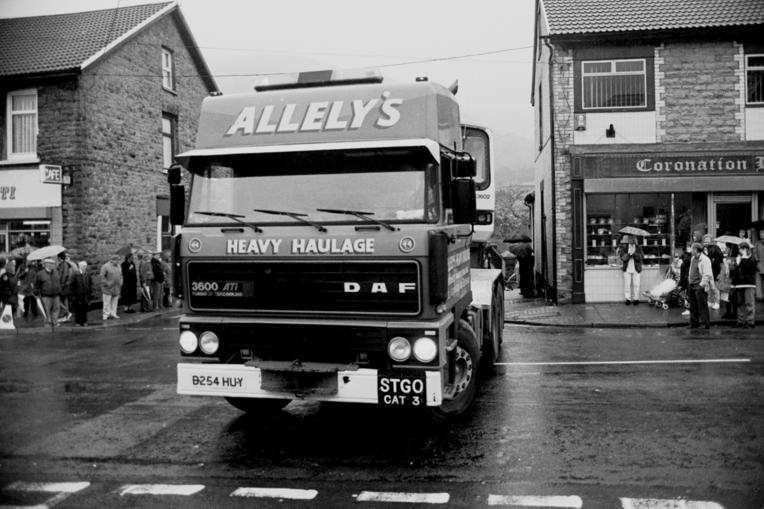 In 1996 some youths places a concrete block on the track near Treorchy A couple of miles down the line.
This caused severer damage to underneath the train and actually distorted the chassis, the train 143 602 had been moved to Treherbert just up the line where from there it could be loaded for road movement to the works for repair.

I can't find any reports about the incident and I still don't know anymore about it as it was just before all news agencies went online and its to new to be given priority to as they update their digital libraries.

On 1st November 1996 A crane was hired along with two of Allelys trucks to move the unit to the works, I think it was rebuilt in Crewe but I could be wrong