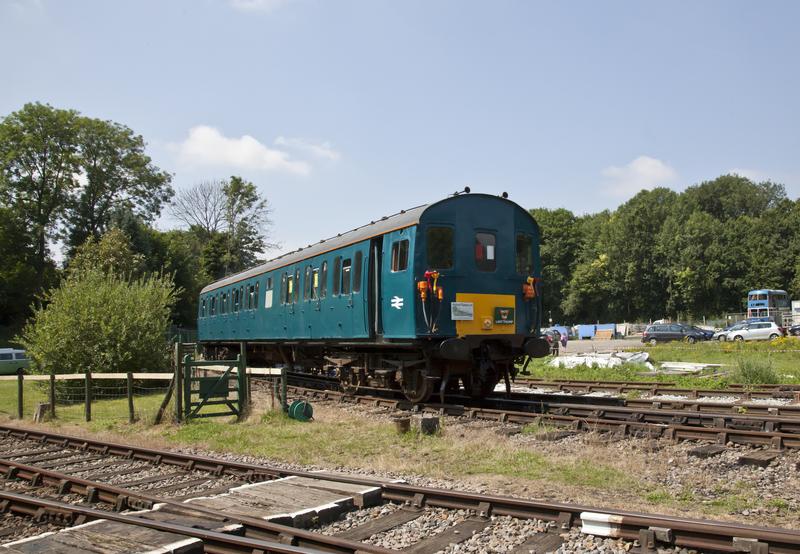 Not long after preservation in 2005 1101 sits at Shepherdswell, at this point the preservationists have already changed the unit number and put 1101 back on it 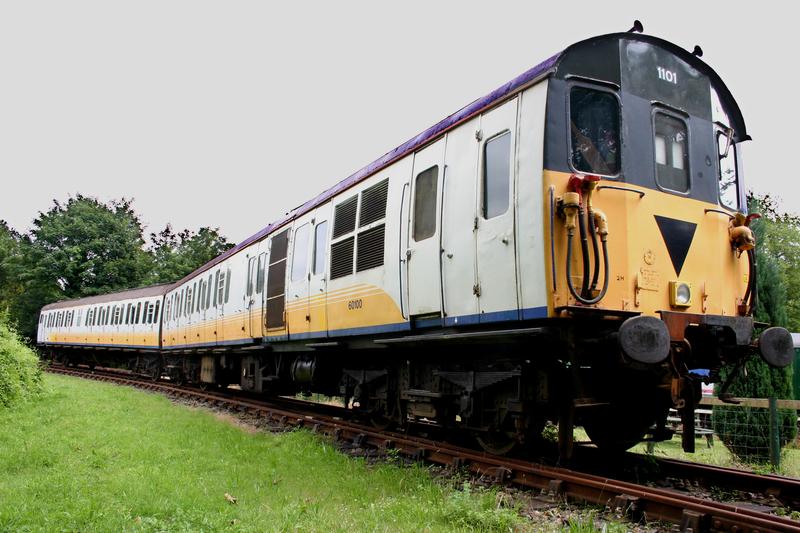 1101 at Shepherdswell in May 2013, this was taken not long after it had been restarted but still had a long way to go before it was carrying passengers 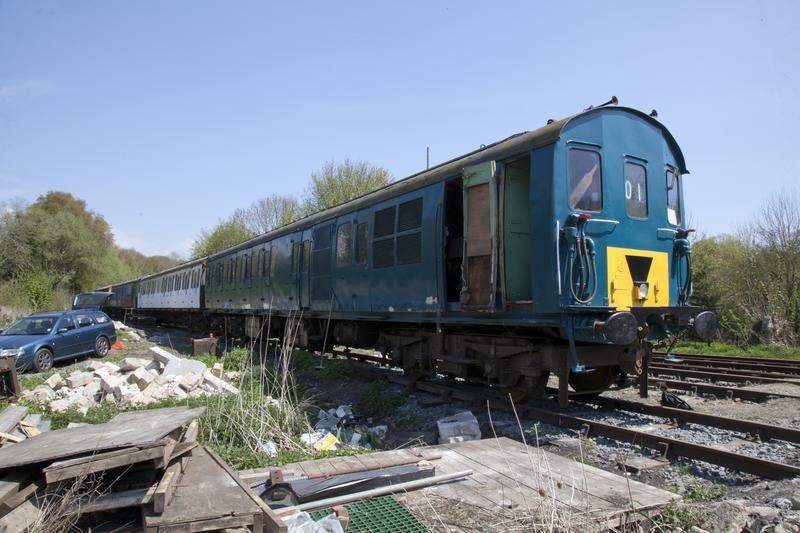 DEMU 1101 was the first unit from the first batch of 18 units to be produced at the Eastleigh works, having been built on Ashford produced under-frames. These DEMU (Diesel electric Multiple units) were based on the BR designed 2 HAP units (Half lavatory with Electro Pneumatic Brakes, i.e. one lavatory to serve both carriages) as opposed to the Southern Railway design, that were produced from 1951 onwards; and the electric, BR designed, 2EPB (Electro Pneumatic Brakes) units that were produced from 1954-5 originally for use on the Tyneside 3rd rail system, but transferred to the Southern region in 1963 after the north eastern line was de-electrified. This first batch of DEMU was designated 2h units, reflecting the number of coaches and the intended route base (Hampshire) and released for use on the 16th September 1957 for use on the Portsmouth / Southampton and Alton, non – electrified routes in Hampshire.

This particular unit had been exhibited at the Eastleigh works open day on the 7th August 1957 and had commenced test runs on the 12th August 1957.

British rail and Southern railway had a long working relationship with English electric motors, so inevitably, The English Electric Company were tasked to produce a diesel engine for these new units. The English electric 4srkt diesel engine, which sat on a three point mounting (4 cylinder, supercharged, RK engine designed for Traction as opposed to marine use) was subsequently fitted which powered 2 English electric EE507 motors that provided the drive to the bogie at the inner end of the DMBSO (Driving Motor Braked standard open). It was fitted with a suburban gearbox. In early 1958 the engine was up-rated from 500hp to 600hp with the replacement of its Napier MS100 turbocharger with a Napier MS200 model.

The 2 car units consisted of a Driving Motor Braked standard open carriage, which carried the engine, a driving cab and guard compartment. The second carriage was a Driving Trailer Composite, which had a driving cab and some first and second class compartments.  Together the 2 carriages were 133 feet, 3 and a half inches long; weighed 88 tons and seated 13 first class and 114 second class passengers. A breakdown of each carriage is now discussed.

The DMBSO – carriage no s60154 ( although originally numbered 60100 which had to be changed in 1989 to allow the number to be used for class 60 diesel locos), consisted of a full width drivers cab – and was fitted with 2 EE507 motors with suburban gear ratios, and behind the engine was a guard’s compartment 8’2 and a half inches wide. There was access from the guard’s compartment to the engine room, but no access to the rest of the passenger compartment. The passenger compartment consisted of 52 seats, located within 5 bays consisting of 3 seats on one side and 2 on the other. Smoking was allowed in this compartment. The carriage was 64 foot long – weighed 56 tons (split 32 tons on leader bogie, 24 tons on motor bogie) and was fitted with a buckeye coupler with rubbing plates, as opposed to the central buffer and 3 chain arrangement used on the 2HAP units mentioned earlier. It also consisted of an external lighting conduit along the roof. Underneath and between the bogies were fuel tanks and battery boxes. This first batch of these units had been ordered on the 16th November 1955.

The Driving trailer composite (DTC), carriage 60800, had a large 2nd class compartment but, unlike the 2 hap units of the time, did not have 3 first class cabins; only two. The outer first class cabin, behind the cab, was converted to a 12 seat second class compartment and was not linked to the other first class accommodation. The first class compartments had access to their own lavatory via a corridor and consisted of a total of 13 seats. The large second class saloon consisting of 50 seats; was designated as non-smoking and also had access to a lavatory. This lavatory was positioned in the centre of the carriage and on the opposite side from the 1st class lavatory. The two lavatories were completely separate and isolated from each other.  This carriage therefore consisted of a total of 13 first class and 62 second class seats, 12 of which were located in the outer cabin next to the driving compartment. It was 64 feet long and weighed 32 tons and was also fitted with a buckeye coupler with rubbing plate’s arrangement. It also consisted of an external lighting conduit along the roof.

Shortly after implementation, a new “Burgess” straight through silencer was fitted, following complaints about the excessive noise and there was also a problem with the mk 3 bogies. The 2HAP and 4 EPB units had been fitted with the same bogies, but very quickly cracking on the frames was discovered. From around September 1958 all of the Batch 1 DEMU stock was sent back to Ashford for the bogies to be modified. The modifications included more robust side spring hanger brackets and various types of vibration reduction dampers being fitted. With theses modifications the bogie was redesignated as a mk 4 and this bogie design lasted until the end of the units life.

In august 1959 the entire first batch of units (unit 1101 to unit 1118) was augmented with an additional centre coach, which had become a necessity due to the popularity and reliability of the units. These “Trailer second” coaches consisted of 2 saloons of 5 bays each, seating 104 second class passengers. One of these saloons was designated as non-smoking. The carriages were 63 feet 6inches long and weighed in at 30 tons. With the three carriages, the unit was 199 feet 6 inches long and seated 13 first and 206 second class passengers. These trailer second coaches lacked the external lighting conduit along the roof. This augmentation was completed by November 1959 with the units subsequently re-designated as 3H units. The trailer second for this unit was s60650.

By the end of 1964, the 12 seat, second class compartment in the DTC had been cleared of seating to become a luggage compartment.

During 1960 all units began to have a large orange “V” painted on the cab ends and from 1965, this was replaced by a small yellow warning panel. The end with the guards compartment was supplemented with a black upside down triangle within it, to indicate to station staff at which end the guard compartment was located. By the end of 1966, this unit was repainted in blue with full yellow ends.

During the 1980’s, blue asbestos insulation was stripped out and it was only those units that had this operation that now have survived into preservation.

In Dec 1998 the unit was sent for overhaul and released as a 2 car unit in Connex yellow/white livery.

On the 15/10/1994 unit 1101 was the rear unit of the northbound train (attached to 1118 at the front) that was involved in the fatal Cowden train crash. The unit escaped with no real damage but 1118 was less fortunate. Five people died in the crash.

This unit was fitted with TPWS (Train protection warning system) in late 2002 / early 2003 and was withdrawn in December 2004.

The DMBSO and DTC have been preserved on the East Kent railway and both are in 2014 returned to service.