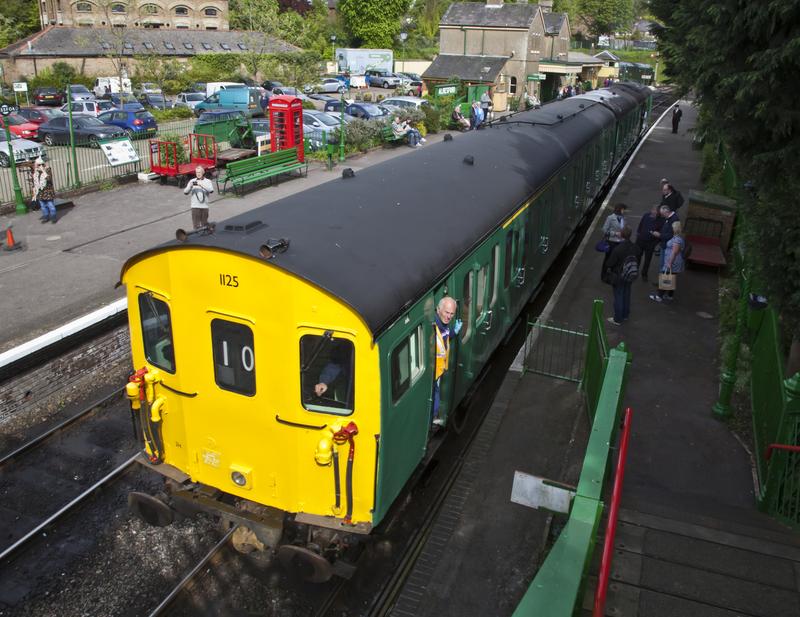 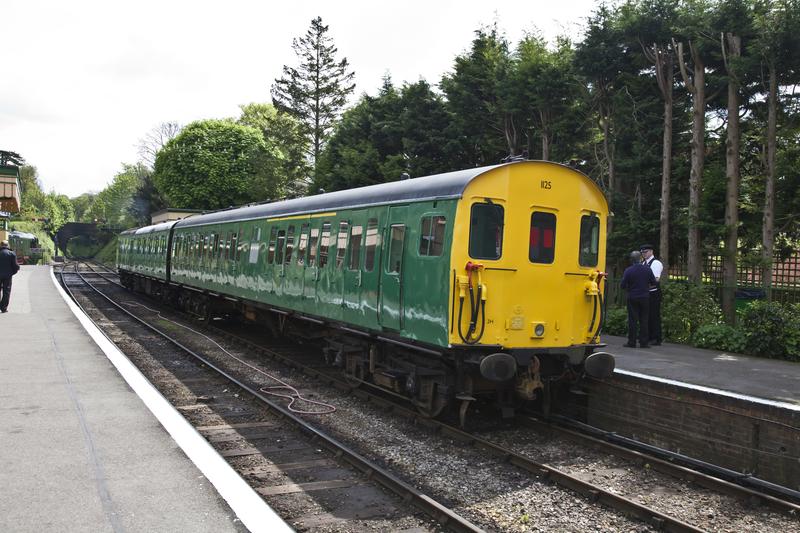 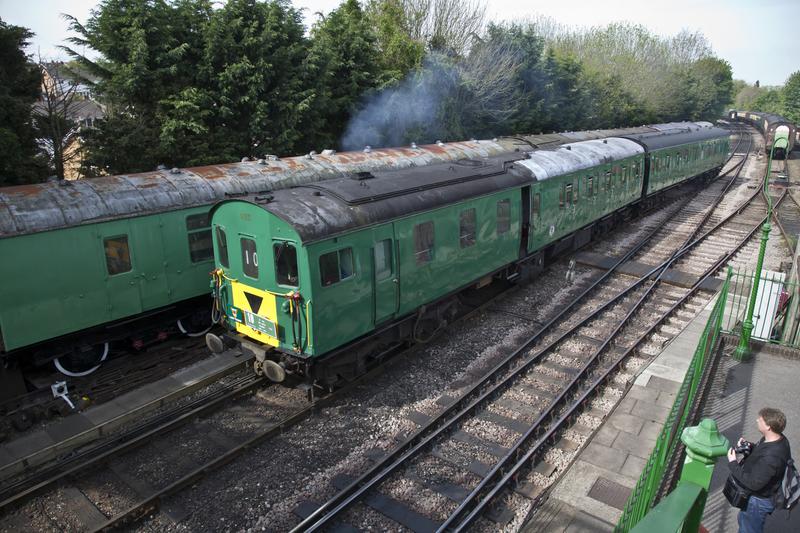 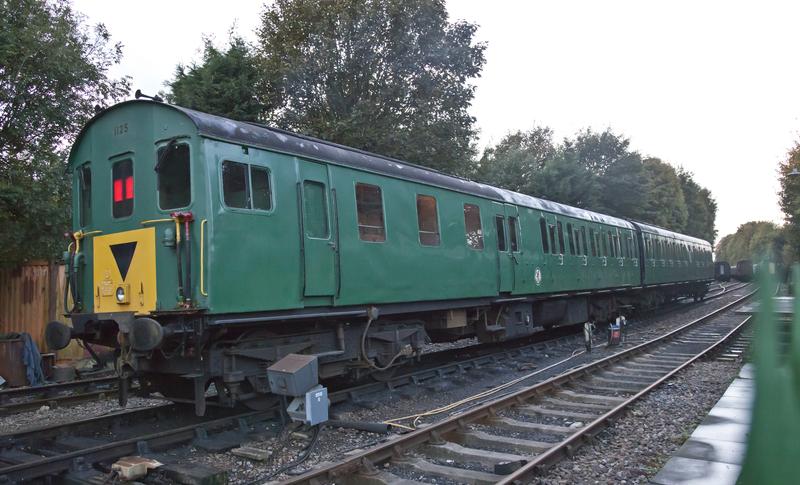 1125 was one of the first units to be returned to service after preservation by a dedicated team on the Mid Hants Railway. 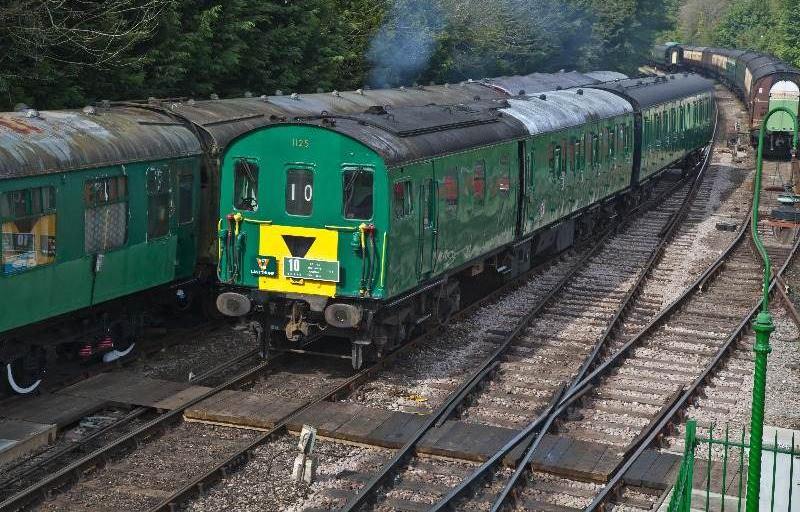 These DEMU (Diesel electric Multiple units) were based on the BR designed 2 HAP units (Half lavatory with Electro Pneumatic Brakes, i.e. one lavatory to serve both carriages) as opposed to the Southern Railway design, that were produced from 1951 onwards; and the electric, BR designed, 2EPB (Electro Pneumatic Brakes) units that were produced from 1954-5 originally for use on the Tyneside 3rd rail system, but transferred to the Southern region in 1963 after the north eastern line was de-electrified. This third batch of DEMU was designated 3h units, reflecting the number of coaches and the intended route base (Hampshire). This batch was ordered on the 13/10/1958 and delivered on the 26/12/1957.

British rail and Southern railway had a long working relationship with English electric motors, so inevitably, The English Electric Company were tasked to produce a diesel engine for these new units, which sat on a three point mounting. The English electric 4srkt diesel engine (4 cylinder, supercharged, RK engine designed for Traction as opposed to marine use)was subsequently fitted which powered 2 English electric EE507 motors that provided the drive to the bogie at the inner end of the DMBSO (Driving Motor Braked standard open). It was fitted with a suburban gearbox. It was fitted with a suburban gearbox and the Napier MS200 supercharger providing 600 hp.

The DMBSO – carriage no s60124 consisted of a full width drivers cab – and was fitted with 2 EE507 motors with suburban gear ratios- behind the engine was a guards compartment 8’2 and a half inches wide. There was access from the guard’s compartment to the engine room, but no access to the rest of the passenger compartment. The passenger compartment consisted of 52 seats, located within 5 bays consisting of 3 seats on one side and 2 on the other. The carriage was 64 foot long – weighed 56 tons (split 32 tons on leader bogie, 24 tons on motor bogie), and was fitted with a buckeye coupler with rubbing plates. This unit consisted of 52 second class seats and smoking was allowed in this compartment.

The Trailer second coaches consisted of 2 saloons of 5 bays each, seating 104 second class passengers. One of the saloons was designated as non-smoking. The carriages were 63 feet 6inches long and weighed in at 30 tons. With the three carriages, the unit was 199 feet 6 inches long and seated 13 first and 206 second class passengers. The trailer second for this unit was s60670. The unit was delivered on the 26th Dec 1959.

During 1960 all units began to have a large orange “V” painted on the cab ends. From 1965, this was replaced by a small yellow warning panel. The end with the guards compartment was supplemented with a black upside down triangle within it, to indicate to station staff at which end the guard compartment was located. By the end of 1966, this unit was repainted in blue with full yellow ends.

On the 4th February 1973, this unit was involved in the last day of working on the Mid Hants railway.

During the 1980’s, blue asbestos insulation was stripped out.

In 1998 the unit was sent to Eastleigh for an overhaul and re-emerged as a 2 car unit and painted in Connex yellow and white colours having also received a new engine.

This unit was fitted with TPWS (Train protection warning system) in late 2002 / early 2003.

Unit 1125 was the first to be sold by Porterbrook (The BR leasing company) to a private company, being sold to the Mid Hants railway on the 18th May 2004. As a testament to these units, the unit moved from Selhurst to Ropley on the Mid Hants under its own power.