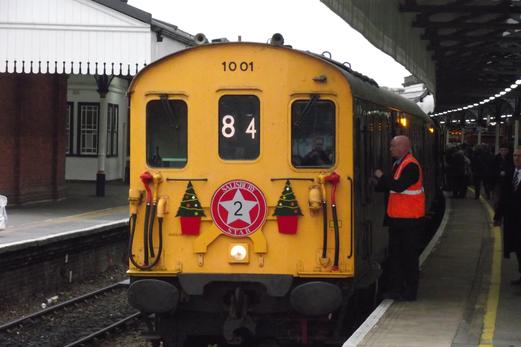 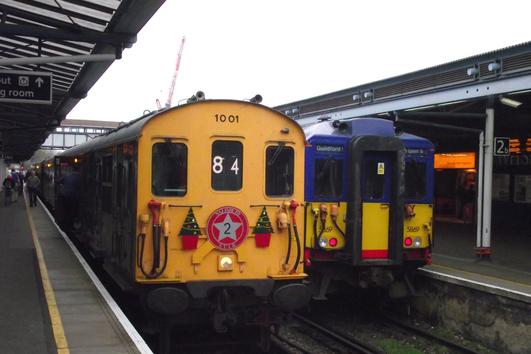 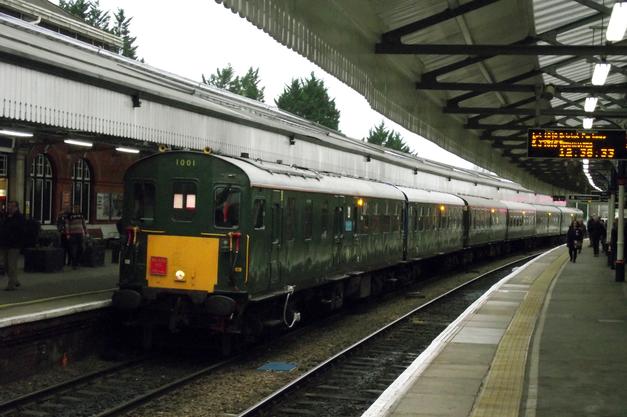 ​HDL traditionally undertake a shorter excursion in December with festive decorations and complimentary mince pies.   On Saturday 6th December 2015, 1001 ran to Salisbury ; not for the first time, hence the trip being named the “Salisbury Star 2”.

The weather was quite dismal making for limited photo opportunities.   The outward journey ran from Hastings via Tonbridge to Redhill where I joined the train.   Redhill was even more congested than usual thanks to a block on the Quarry line and an incident at Battersea Park leaning Victoria services were turning back at East Croydon.   However the special had a long pathing allowance outside and arrived on time.   After reversal, departure was slightly late due to a passenger not having boarded before the doors were locked, to the guard’s obvious frustration.

Slippery conditions made for a steady climb through Dorking to the summit at Gomshall, with lots of leaves blowing around as we passed, and arrival at Guildford was slightly behind schedule.   However we again had a generous stop, during which a number of SWT crews were looking at 1001 with great interest.   The driver – apparently an Eastleigh man who drove at least from Redhill through to Salisbury without the need for a conductor – changed ends and we set off over the Portsmouth direct line.   On this heavily graded route littered with speed restrictions, including a 40mph through Buriton tunnel at the summit, and with some signal checks, we used all the pathing allowance and passed Fareham a few minutes down.   At one intermediate station we were brought to a stand on a  red, which enabled a photographer, who apparently knew the driver, to pass the time of day.   We then gained on the schedule to St Denys but had to wait our path at Northam on fairly lax timings.

Some of the fastest running of the outward journey occurred between Redbridge and Romsey, but we were brought to a stand at Romsey station and delayed on the final stretch of the run due, apparently, to a preceding steam special that had come up via Chandlers Ford.   At Salisbury we watched 1001 depart for the depot before going off to explore.

Amongst the highlights enjoyed by participants were the Christmas market, the Cathedral, a festival of Christmas trees as well as some good real ale hostelries and one that has a set of horns of a Class 33 that are used to call “time”.

A punctual departure was made from Salisbury in the hands of Tonbridge-based GBRf driver Rob Lane, and the train this time ran via Chandlers Ford and Eastleigh (where the outward driver was dropped off).   It was a windy evening with a nasty drizzle and some wheelslip was noted on the climb to Haslemere.   Driver Lane kept it well under control but nevertheless there were some evocative smells reminding us of commuting by Thumper in the leaf fall season.   Because of the conditions and a fairly tight schedule, we were about 20 minutes late into Guildford.   We were routed into the double sided platform 6/7 where the crew, unusually, released the doors on the platform 7 side rather than the usual 6.  We were given the road to leave on the up line, running through St Catherine’s tunnel parallel with a Portsmouth-bound Desiro, which obviously went ahead at Shalford Junction before we crossed to the right line.

Some more slipping was experienced climbing to Gomshall before a rattling good run back to Redhill where the CIS operators had overlooked us and announced 1001 as the London Bridge service.   I alighted here but I am told by Spa Valley colleagues that arrival back at Tunbridge Welss was “right time”.

Another reliable and splendid day out thanks to HDL and GBRf.