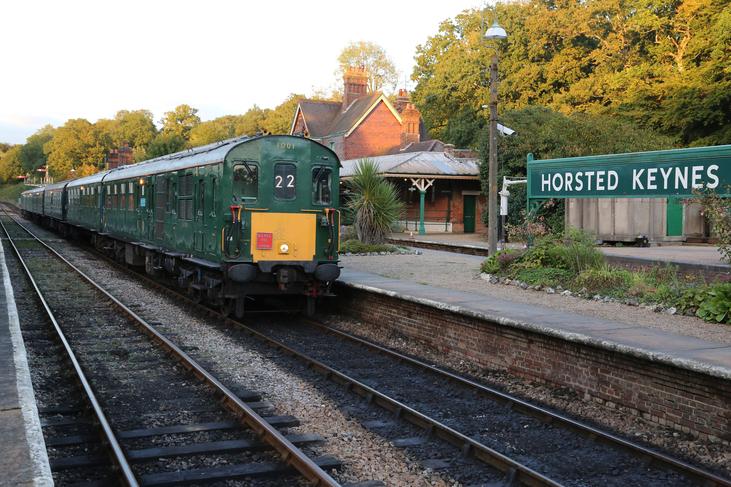 Thumping to the Bluebell 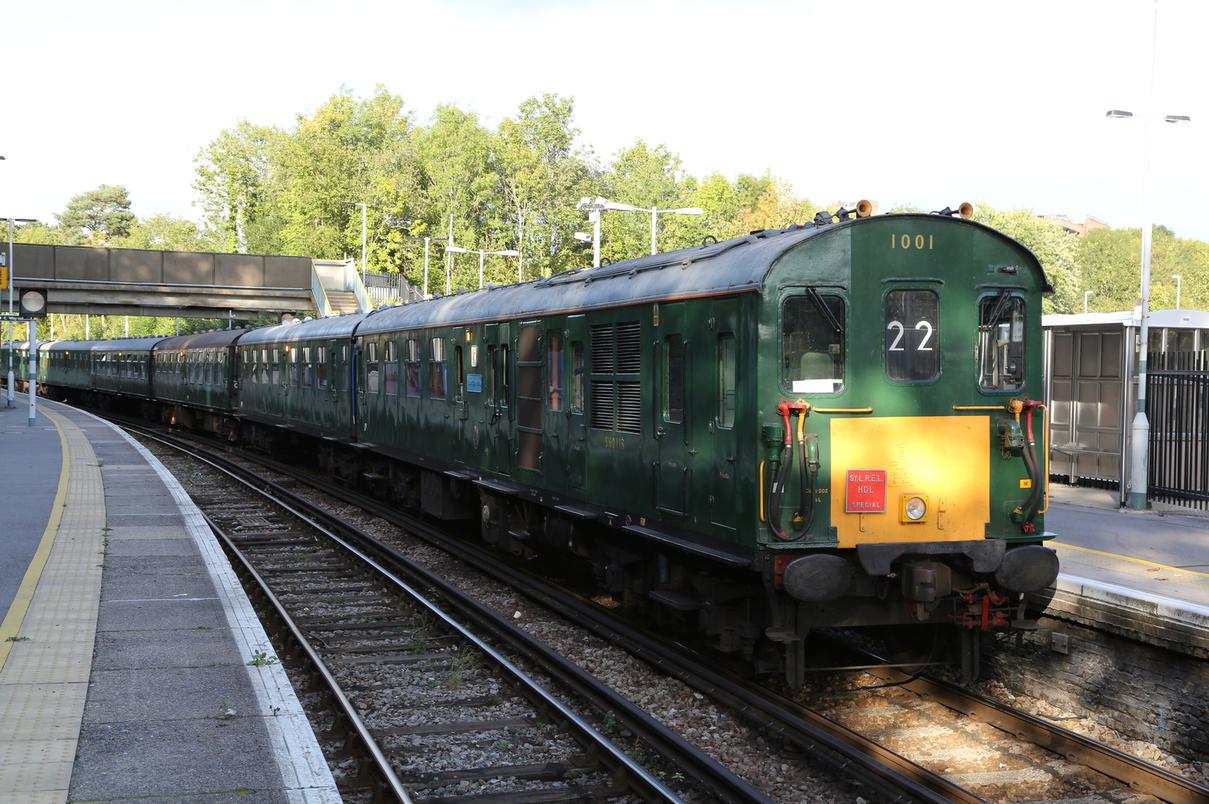 The return run was pretty much a rerun of the outward trip with an extra stop at Lingfield.   The loadings thinned out pretty quickly as many who had travelled out to Tonbridge or beyond to join the train bailed out at East Croydon to get home.   A combination of darkness, tiredness and he fact that the party was getting quite merry by this time means I paid less attention to the details of the journey although I noticed the train again getting a lot of attention at East Croydon with staff and passengers who were probably too young to have travelled on a DEMU getting out their mobile phones to film it ; no doubt attracted by the noise.

Enormous thanks to John for putting on such a splendid retirement event ; to his colleagues who helped put it together ; to Hastings Diesels and GBRf for running it so efficiently ; to the Bluebell for allowing us access and keeping all the facilities open for us ; and to all the Southern staff who handled the train at its calling points, especially East Grinstead.   Finally special thanks to Paul Winter for the use of his excellent photographs of the tour.

So just after lunchtime, unit 1001 in its customary fine fettle left St Leonard’s depot for its first pick up at Hastings.   A nice touch was the allocation of reporting number 1Z22, so that it could carry the traditional Hastings headcode 22.   As usual a headboard was carried ; colleagues having made up the nameboard “Controller in a Million – John Atkinson”, perpetuating an “in” joke among the Control staff centred on Class 442 2416, which carried the name “Mum in a Million – Doreen Scanlon”.   “Doreen”, as the unit was generally referred to, was the first to be withdrawn by SWT as it reportedly had non-standard air-con, which was troublesome.

The train ran via the traditional Hastings main line to Tonbridge where I joined it.   We were a bit thrown on boarding because the unit had got turned round on its tour to Loughborough the previous weekend - something HDL always try to avoid – so the Club Class was at the back.   We were given a timetable leaflet produced in the 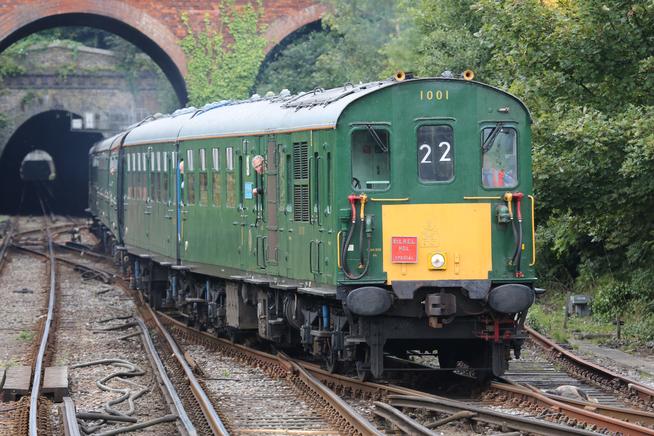 When the young John Atkinson joined me on the daily commute to school on board the 0744 Edenbridge to Tonbridge train in September 1968, neither of us could have had any idea where this would lead 47 years later.   DEMUs, and particularly the Hastings units and their Tadpole offspring, would be part of our lives through school and commuting until their respective withdrawals.

Anyone who has followed the postings about the John Atkinson Retirement Special on 25th September 2015 will realise that John has been a highly respected professional railwayman with a host of friends and contacts.   Add to that his involvement with the Bluebell and Hastings Diesels and it was clear that John had unprecedented capacity to organise something truly exceptional.

The special train that ran on 25th September was the fruition of a dream John had held for some years.   It made history in being the first visit by a DEMU to the full length of the Bluebell line.   1001 had previously been onto Bluebell metals at Imberhorne Viaduct (East Grinstead) but this was the first time such a unit had penetrated to Horsted Keynes and Sheffield Park.

house style of a Southern route timetable and an Edmonson card ticket – some of which, including mine, bore the numbers of Hastings units (1006).   In homage to our personal history with DEMUs, and to suit a handful of John’s guests, it called at Edenbridge on the way to Redhill.   Now we were in Southern territory, and the Information System operators had risen to the challenge by putting the train on the screens as “Private charter : the JKA retirement special.”   However, CIS can only show Network Rail stations as destinations and couldn’t show Sheffield Park, so they had opted to show the destination as “Audley End”, because it was the end of an era !

After Redhill, where more passengers joined, we were treated to some impressive thumping through the long tunnel at Merstham, reminding us that people didn’t try to talk on their mobiles in the DEMU era.   Conversation of any sort was largely impossible.   Then it was up to East Croydon where we reversed in Platform 5 between 1602 and 1607 ; a tight schedule at the start of the Friday rush hour.   Nevertheless, the usual reliability of 1001, the efficiency of the GBRf crew, and the skill of Three Bridges panel 1B made sure we were into Croydon comfortably on time, and a slightly late departure was entirely due to waiting for the road behind a Southern train.   The train attracted considerable interest although the noise of the engines on departure seemed to catch a number of waiting passengers off guard.

We enjoyed a swift run to East Grinstead, arriving punctually.   As the Bluebell were running a Fish and Chip special that evening, we had been warned that catering in the Sheffield Park buffet would be limited, so it had been arranged that a delivery of sufficient pizzas for the 160 passengers would be delivered to the train at East Grinstead from a well-known franchise.   Fortunately we were routed into the platform that gave level access to the street, while a service train was diverted to the other platform.   I noticed one commuter coming off the London train walking up and down admiring 1001 with a huge smile on his face, and I wondered whether he regarded DEMUs that fondly back in their day.

The run down to Sheffield Park was both the main event and largely uneventful, although the fact that we came to a stop just past Kingscote signalbox led me to think the token exchange might have been fumbled !  However I have since been told by a fellow traveller who was filming at the time that the exchange was smooth but we stopped for additional instructions from the signaller.  We arrived punctually at our final destination and alighted for speeches and a presentation of a signed shoe paddle (although one non-railway guest thought it was a bat !).  Our host had once been a member of the station staff at Horsted Keynes, and so guests had a choice either to remain in the bar at Sheffield Park or join an extra shuttle trip to Horsted Keynes for an extended photo opportunity.   I had thought to stay at the Park to get a photograph of the unit approaching on its return, but it was clear that there would be insufficient light by then, so I joined the trip up to HK.   Thanks to it having been a fine day, there was just enough daylight for some good shots there.

We waited until the Fish and Chip special had arrived and then returned to Sheffield Park.   Standing on the platform there, a group of us were discussing the fact that in BR days, the engine room lights in a DEMU would rarely be turned on, and seeing them lit was usually a sign that there was or had been an engine problem.   On 1001’s outings, however, it seems usual to have them on after dark.   As someone said, now the engine is so clean you could eat your dinner off it, so why not show it off ?

It was dark when we finally left Sheffield Park and the experience of driving in the pitch dark with only semaphore signals is probably not an everyday one for modern crews.   In what may have been a deliberate strategy, we made a cautious approach to Sharpthorne tunnel, enabling the driver to give 1001 all seven notches through the tunnel itself, which was quite impressive, if perhaps unpopular with the residents of West Hoathly !