East Croydon where the units got into trouble. The impromptu stop was to enable a Class 33 to couple up.

Hastings, just after being towed in by 33048

The rear end of the train at Hastings. The red lamp at the rear is the giveaway that the train was being towed.

Revue and Images by Tony Watson

A farewell to the 3R Tadpoles was run by the Southern Electric Group on 6th May 1979.   As a long term user of the Tonbridge-Redhill line, it was inevitable I would be on board and thanks to some close links with some BR staff who were also members of the SEG, I was involved in planning the route.   As well as remembering the day, writing this note has taken me back to days when things happened that would be unthinkable now, such as the driver allowing one of the SEG stewards to ride in the cab and participants being allowed to wander unchallenged over the running lines at photo stops.

The train started at London Bridge and was booked to run non-stop to Brighton (via the old loop from Purley platform 6 to the down main !), then Eastbourne, Hastings, Ashford, Tonbridge and Redhill to Reading.   Thus having covered all the usual Tadpole lines (including the regular ECS moves), we ended the day with a bit of silliness, running up the GW main line from Reading to North Pole Junction, then via Blackfriars to terminate at one of the down through platforms at London Bridge.  St Leonards came up trumps as requested and fielded 1206 in all blue with the driving trailer leading and 1203 in mixed blue and grey and all blue, with the power car leading to give the maximum variety of photo opportunities.

Unfortunately the day did not start well. The scheduled non-stop run was stymied by a special stop in order to pick up a late running passenger at East Croydon.   He was not popular !   However, as we climbed Forest Hill bank slowly it was apparent all was not well.   I leaned out of the window of the leading compartment where I was travelling and was able to converse with the SEG steward who was riding in the cab. 1206 was leading and he said that 1203 was not providing power.

At East Croydon, fitters were called from Selhurst but failed to rectify the problem and simply managed to stop the engines and not get them restarted at all.   A Crompton was called and we were loco hauled to Brighton, Eastbourne and Hastings, with no lights through the tunnels because the engines weren’t running.

We were booked a lunch stop at Hastings and the train was taken to St Leonards where the fitter quickly identified the problem.   In fact the fault was not with 1203 but with the electrical control gear on 1206 which was not sending signals to 1203.   So reversing the units would have solved the problem, at least until the next reversal.   Clearly the Selhurst fitters were not Thumper experts.

So 1204 was substituted for 1206 ; it was a shame to lose the all blue unit but now we were able to enjoy some thumping at last.   After a photo stop at Rye, the two Tadpoles gave a sprightly run along the racing ground to Tonbridge and on to Penshurst where we had another photo stop.   The local signalman and his family, who lived in the station house, came out to see what was going on.

At Redhill, regular travellers were disappointed to see the St Leonards driver being relieved by one who was notoriously erratic and casual about timekeeping.  True to form, he failed to make the scheduled photo stop at Gomshall, but stopped at Chilworth instead; disgorging photographers just as the service train passed in the opposite direction.

I had to leave the tour early at this point, but I understood from friends who remained aboard that the remainder of the trip passed off without incident.    ​

Before the tour set off 1206 along with 1203 wait at London Bridge. Ironically this is the same platform the 'Last Thump' tour finished it's trip. 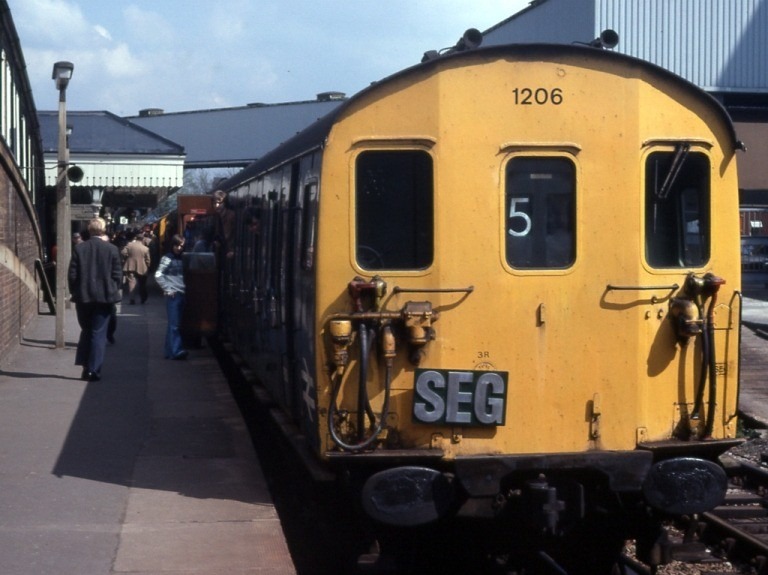 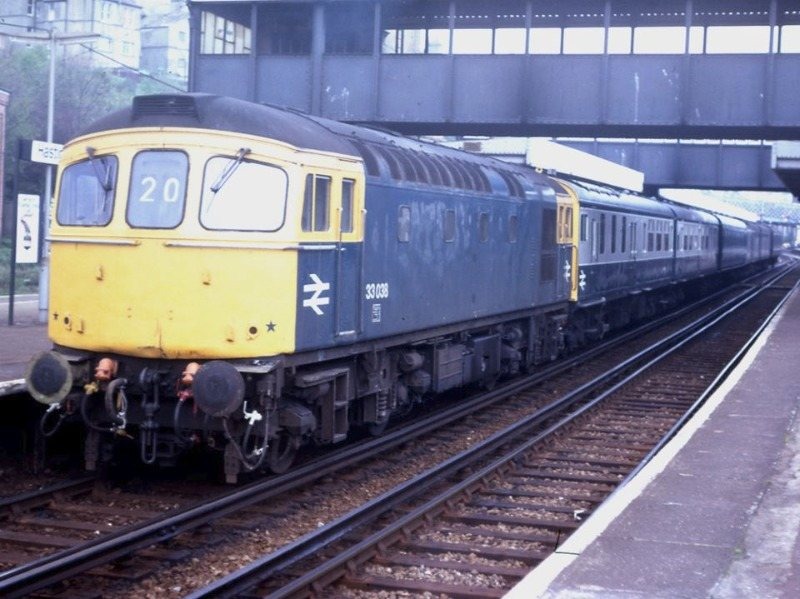 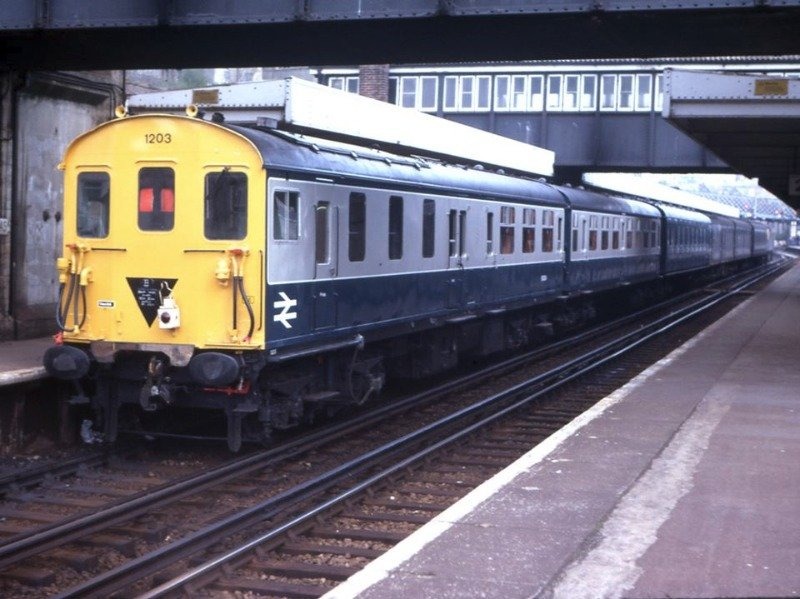 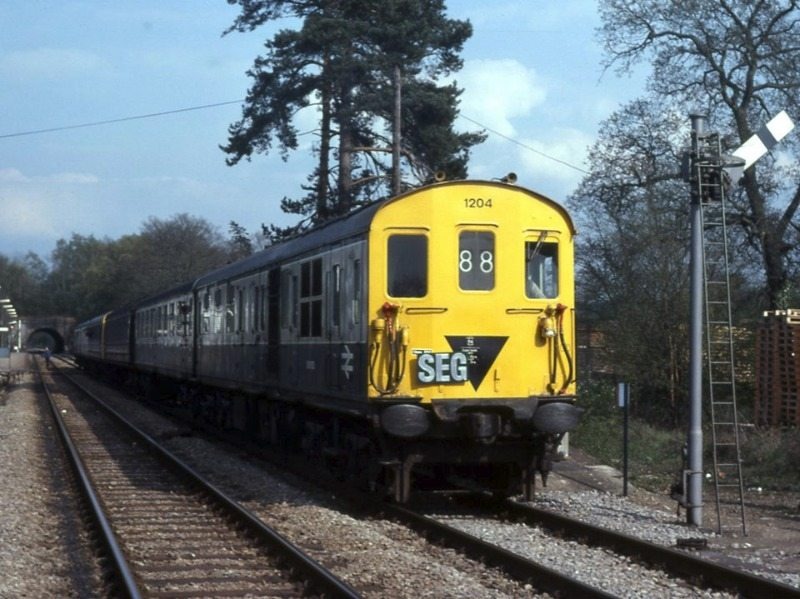 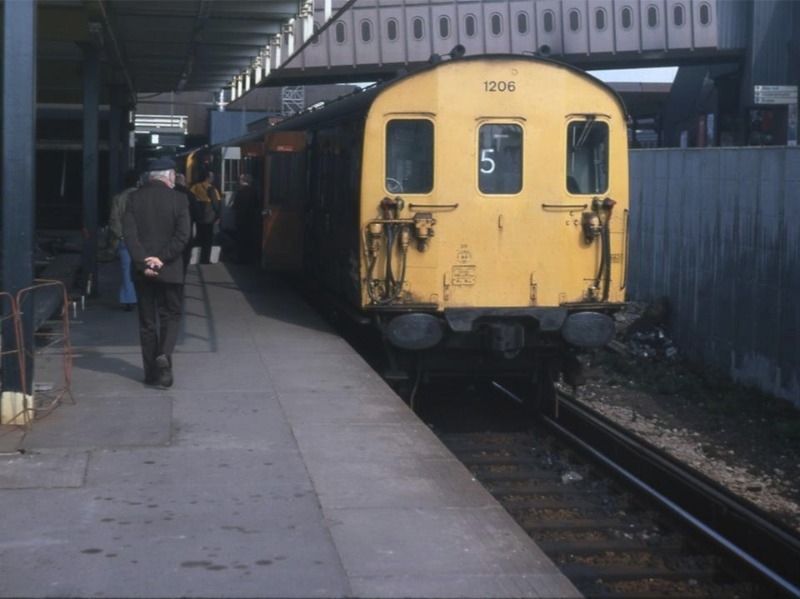